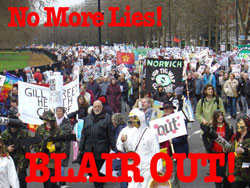 Today, I marched alongside millions of other people all over the world in the cause of peace and freedom. There were apparently over one million demonstrators in Rome alone! I’m most heartened that in New York, over 100,000 demonstrated – can you imagine the kind of flak these brave Americans must get from warhawks and anti-Arab racists? I just checked and the global antiwar news is amazing. I’ve archived the google I just did, you can get a flavour of what’s going on/just happened by clicking here. Look at this photo of Hungarian peace marchers in Budapest: 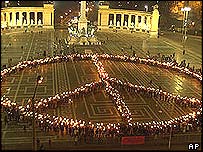 As for London, as always the yellow press have severely underestimated the figures, taking their cue from the Met Police’s laughable guesstimation. 25,000? Try at least tripling or quadrupling that. And here’s a clue: you can’t base your estimate on the crowd at Trafalgar Square because as many people were leaving as arriving. So we certainly did our bit and, I feel, did Britain proud in the global antiwar movement.

There was a great spirit on the march: very defiant and undaunted. The most sombre moment came at Trafalgar Square when they released thousands of balloons representing the dead of the Iraqi invasion. Seeing them float off and get battered by the heavy winds certainly touched me.

But to Blair, those deaths were just regrettable necessities. Just as to Bin Laden, the dead of the WTC are unfortunate casualties of his insane war. This is the mentality of war: hatred and dehumanisation of your “enemy”, even when that enemy is nothing more threatening than unarmed civilians. Every day in Iraq, more people die. Just today, US stormtroopers shot two journalists, killing one and injuring the other. Their crime? Being in the car next to a car that jumped a checkpoint. Oh, and looking a bit Arabian, obviously.

Still, at least the US has got the security around the oil wells established. That was the very first thing they secured. Funny that, innit? The oil can sleep safely at night in Iraq, even if Iraqis can’t.

Here’s the thing: as inspiring as all these demonstrations have been to me, I don’t want to go on any more. I don’t want to be marching in six months time because the US Empire has threatened to invade Syria/North Korea/Guernsey. I’d rather Bush and the neo-Nazi neocons got the idea from the global demos that their little plan of lebensraum wasn’t going to be tolerated. Remember, they may have the US military, but we have millions of people from every nation in the world! I’ll put it in terms even George can understand: our army is bigger than yours, mate. Take the hint…

But if the US and its lackeys persist in their power-grabbing plans, I’ll gladly sacrifice my time/money to march again. It needs to be done, we have to show Bush, Blair, Bin Laden and all the other terrorists out there that we won’t submit to their rule of fear.

We won’t back down. We’re not going away. We won’t forget their war crimes.