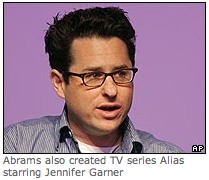 JJ Abrams, creator of TV show Lost and director of Mission Impossible III, is to produce and direct the 11th Star Trek film, it has been reported.

According to industry newspaper Daily Variety, the film – set for release in 2008 – will focus on the early days of Captain James T Kirk and Mr Spock.
(Source: BBC News)

As a lifelong Trekkie, I’m praying that the new film loses the layers of shite grafted onto Trek by Brannon and Braga. I’d love to see a return to the vision of the future that Roddenberry invented, an optimistic, fantastic future. And it wasn’t afraid to push the boundaries:

Several notable themes were tackled throughout the entire series. Arguably, the most important was the exploration of major issues of 1960s America, like sexism, racism, nationalism, and global war. Roddenberry utilized the allegory of a space vessel set many years in the future to explore these issues. Star Trek was the first television show to feature an interracial kiss, Roddenberry getting around the censorship of such displays by depicting it as being compelled by an alien of great mental ability.

Episodes such as “The Apple”, “Who Mourns for Adonais?”, and “The Return of the Archons” display subtle anti-religious themes. “Bread and Circuses” and “The Omega Glory” have themes that are more overtly pro-religion and patriotic. Network interference, up to and including wholesale censorship of scripts and film footage, was a regular occurrence in the 1960s and Star Trek suffered from its fair share of tampering. Many scripts had to be revised after vetting by the NBC censors and, according to one book about the series, the gaping mouth of the “salt vampire” monster in the episode “The Man Trap” was actually an in-joke which referred to the network censor’s persistent habit of cutting love scenes which featured open-mouthed kisses.
(Source: Wikipedia)

I hope that Abrams brings some of the slickness of ‘Lost’ to the new Trek film but also that he manages to recapture the spirit of the original series, that breathless idealism that got gradually watered down through the spin-offs.

Hmmm… Kirk and Spock, The Early Years. How about Sean Maher as a young Spock? He looks pretty Vulcan already, and he’s a decent actor. It doesn’t matter if the actor looks thirtysomething as that’s a kid in Vulcan terms. Or, for a young-looking Spock, how about Joseph Gordon-Levitt?

As for Kirk… You’d need someone fresh-faced and quite hyper. William Shatner’s Kirk was still a roustabout in space and that was after maturing. God knows what the kid would be like at Starfleet Academy. How about Chad Michael Murray? He’s handsome enough and I’m sure he could give it some welly.

And please can we have proper aliens, not yet more bipedal humanoids with peculiar nose-ridges. 😀