Just got back from town and seeing my friend Tash, the majority of which we spent ogling girls. She’s better at spotting girls than me but I’m stealthier ~ she just blatantly points!

We were chatting about clubbing and I was trying to persuade her to come out to Mosh tonight. But she’s got an early shift tomorrow and she doesn’t enjoy it as much as she used to back in these days:

Mind you, that was four years ago now… sheesh…

I’m weird in that I never went off clubbing. I love it now as much as when I was a kid.

Today is Friday. If I had to stay in tonight, if I didn’t have a club to go to… it would feel so strange. IT’S FRIDAY!

I think one of the major reasons I haven’t stopped clubbing is that I’m straight edge. If I drank / drugged like most clubbers, I simply couldn’t be out any more: my liver or something else would have given in.

Another is that I love new music. I’m excited to hear the new Such Gold or Title Fight and I want to dance to those songs. Whereas most of my generation never really liked anything new beyond their twenties, I don’t just crave it, Ineed it. Which is probably why retro / cheese nights are anathema to me.

And here’s one from Rock City, Nottingham last week:

The fashions have changed in the intervening decade, more tattoos, more piercings. And, obviously, the 18-year-olds above probably wouldn’t have got into even the Blue Note when they were six. So, the people inevitably change.

But alternative clubbing always has a sense of inclusion that’s missing from mainstream clubs. Whether it’s indiepop, hip hop, pop punk, minimal house or metal, there’s a common thread that the people in the club really fucking love the music. Whereas, to the average mainstream clubber, music is just aural wallpaper: the background for them hooking up. Alternative clubs are fine restaurants, mainstream clubs are McDonalds.

This is why I haven’t got bored. I go clubbing to see my mates and to dance about, yes, but I also go to hear music I wouldn’t otherwise hear, to be educated by the DJ. And I will happily dance to music I don’t know but like.This dialogue is at the heart of every great alternative club: the DJ plays floor fillers, yes, but she / he also pushes it and isn’t afraid to clear the floor with a tune that will be a killer two months from now. This play policy attracts punters who know their music and, in their turn, they will request stuff the DJ doesn’t yet know. When this balance is perfect, you end up with a club that is unassailable and that has a loyal following, no matter what drinks offers other clubs attack it with. When the balance is eroded, say by a twitchy manager demanding constant floor fillers, the alternative club slides into mainstream blandness (hello Blue Note) and the former punters abandon it to the mundanes who now flock to it. Goodbye music fans, hello fist fights.

If I had the money, I’d buy or start my own club. I think I’d do okay at it since I’ve been DJing and clubbing for so long now, I’ve seen people commit every kind of mistake with clubs. The major thing I’d do is to make it an alternative club. I would hire DJs from multiple genres (to start with, hip hop, electronic and rock) and then trust them to know their job. Obviously, if their floors were empty after three months, they’d get the boot but I’d give them enough time to build an alternative audience. You can’t just materialise those punters, they have to be wooed by clubs, they are skittish and fickle, as is every avant garde.

It’s quarter to seven now. Hours till I go out but I’m excited. Who knows what the night might bring? I may have the most amazing time dancing round. Maybe I’ll end up coming home early cos the music’s rubbish and the place is full of Scream wankers. I love the uncertainty of it all, I love the chaos and, out of that randomness, the skein of possibilities.

Most of my current mates I first got talking to in night clubs (hello paradeofashes, heybolly , robnewman ,  emmazombii ,evenifyouwinyourestillatwat  , marcusfool ,  thisisatadawk ,  justtoliveanotherday-withoutyou , timestoodstillforever  , he1ephant  ,marymackenallen) . I would not know these people otherwise. Isn’t that a marvellous, beautiful thing? When most of our lives run in ruts or on polished, machined tracks, there’s something to be said for de-railing yourself and plunging into whatever. 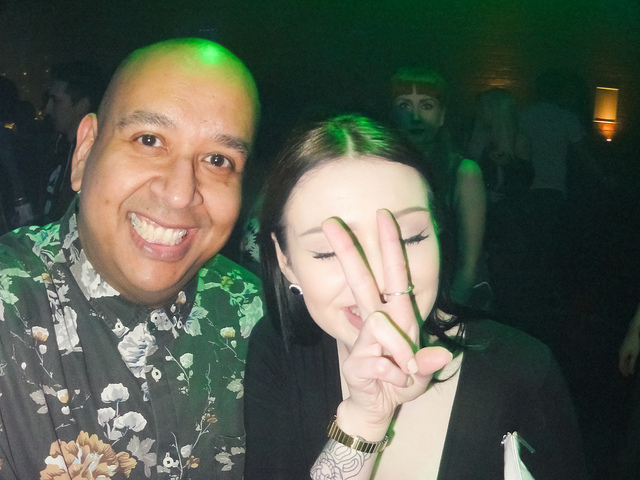 SO, my pics are auto-posting across from Instagram now and, fucking hell, what a weekend.

I get so happy from clubbing! I get so much from dancing to music that I love, bonding with random people while screaming Title Fight at each other, hanging with my mates and watching them deal very sternly with dodgy blokes creeping on them.

And there were so many peeps out this weekend who I haven’t seen in aaaages, like Court, above. I thought Valentine’s weekend would be a bag of wank but it’s the best time I’ve had in… well… I’m not sure!

When I look at the mirror at my conventionally very unattractive male body (no rippling abs here, no lovely toned arms), I’m so happy that my body lets me dance two or three times a week, that I’m able to have adventures and stay up till 6am talking shit with strangers. It’s fucking amazing, when I think about it.  After seeing both my parents go through near-fatal cancers, I love my body in a way I never did before. It’s beautiful, I love it.

And, one day, I’ll probs be too old to get let into clubs or too infirm to go dancing. That’s why I’m making the most of every moment I can. And consciously aware of every choice I make, when I approach someone new, the possibilities that open up. When I don’t, the universes that wither and die. You never know.

Now, if I could just meet a woman who lived for dancing and chaos and the stochastic joy of clubbing as much as I do… *imagines* Wow – what an excellent Halloween! I was going to stay in for reasons I won’t go into here but after talking it over with mates, I just thought, fuckit – go out. And I’m glad I did as I danced till my knees ached and saw some absolutely amazing costumes, the majority hand-made. I hope you check out all the pics from that night because I think they show how wonderfully creative people are. Day by day, we’re squashed into greyness, squat, normal and uniform. On this one night of the year, ordinary people are given the freedom to express themselves pretty much exactly as they want. And the resulting explosion of colour, pattern, shape and symbolism is awe-inspiring. If only we were this free to be whatever/whoever we want every day of the year. All those wonderful people in the photos are now back in “normal,” mass-produced, corporate clothes, the Nikes and the Levis. Drone wear. I wouldn’t even notice them now in the street if I passed them.

But I like to think that, inside, they’re still zombies and vampires, robots and superheroes. Secret dreams, or real selves? Where others see a load of pissed-up kids dressed-up in daft outfits, I see a tiny bacillus of true anarchy, sending out cilia. Click the pic to see some shots from last night’s Bluey! 🙂 Well, we actually went last night but it was at 1am so it was on the 12th, not the 11th. Tricky feller, Johnny Time. I was out at the Snug Social last night and I danced till the very last note from the PA – 3.30am!

A lovely night and a great atmosphere! 🙂 Click the pic for a gallery of stupidness from Wednesday at the Bluey! 🙂