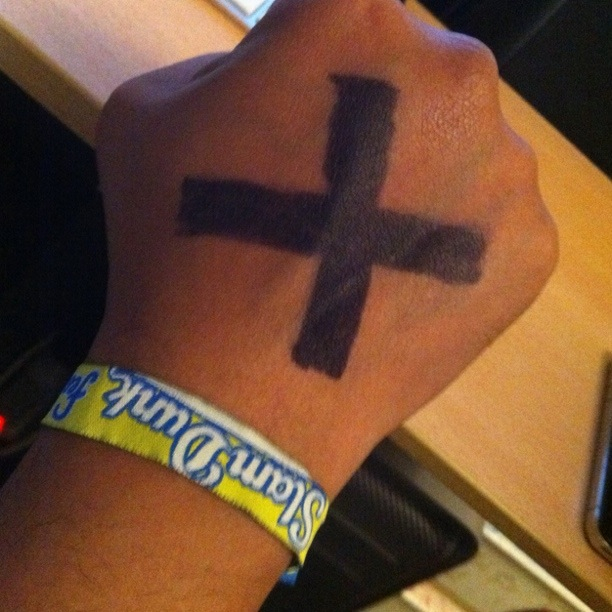 Friday night, I went to Mosh. The music was good, most of the people were fine. But there was a scattering of people there who I absolutely can’t fucking stand. Fair dos, Derby isn’t massive and the alt scene is basically one hundred people at any one time, you’re gonna bump into them cos this town is tiny. Grin and bear it. Oh, he’s pushed me again… leave it cos the wanker is only 21 and weighs as much as one of my legs. Oh, she’s joining in now… just leave it. Grin and bear it. At least I get prior warning because of the approaching stink of poppers and entitlement.

Then a bouncer came up to me and asked me if I’d been threatening people with a knife. Apparently, a “big black bloke dressed all in black” had threatened some lad and his missus.

Well, the only person fitting that description at all (even though I’m Indian) in the 95% white Mosh was me. The bouncer was actually very good about it; he knows I’m a regular, knows I’m friendly and thus that I’m unlikely to be walking around perforating randoms. I had no problem with him, he’s a good bloke. But, you know, I couldn’t shake it off, it was the shit cherry on top of the turd cake. So, I went home.

Last night, I went to City. It was packed cos Meshuggah had just played upstairs so I knew it’d be great music in the Basement. And it was! Lovely big slab of Gojira, Refused, Beartooth, The Ghost Inside, Parkway, Attila, heavy shits and giggles.

Then this bloke turned up. I don’t know him, don’t even know his name. I only know him from City because he knows mates of mine. He’s one of those types that goes somewhere and makes fun of everyone else that’s there, their clothes, their taste in music. Everything he likes is MORE METAL, everything he’s into is AUTHENTIC. Everything you or anyone else likes is fake and shit. You know the type: narcissistic poseur with delusions of grandeur. Whenever he does this to me, as if I’m in on the joke, I ask him why he’s there if it’s such a shite place. And he does what the considers to be this sophisticated grin like… well… he’s gracing us with his presence.

He’s a fucking wanker but I humour him because of said common friends.

He’s also a massive druggie. He’s proud of it, drones on and on about it to me even though he knows I’m edge. Finds straight edge funny and quaint and a bit embarrassing because, you know, edge people actually believe in something non-ironically. Last night, fuck knows what loser cocktail of psychoactives he’d ingested but he basically harassed me non-stop. Any time I’d try to dance, he’d hilariously push up against me or push me away from my friends. It got so bad that two or three of them actually started telling him to fuck off and push him away. But, y’know, he’s a big white bloke with all that privilege AND drugs AND his psychopathic empathy-bypass.

Because I X up, because I sometimes wear my straight edge hoody and obviously because I’m often the only non-white in the place, because I stand out, I get this shit a lot. Blokes (ALWAYS men… never women, funny that, eh?) will decide I’m their target for the night. They’ll push me and get in my face and provoke me and grab my female friends. Anything to get a rise.

This is because drinkers and druggies take any sign of edgeness as an implicit criticism: they think my hoody is criticising them personally. Instead of seeing it as a personal declaration, a statement of belief (and, yes, a beacon trying to find other like-minded people), they see it as a slam. So, they feel justified in attacking me at various levels. I’ve even had people try to pour beer into my mouth, for fuck’s sake. I mean, can you fucking believe anyone would be that defensive and aggressive about their own addiction?

I’m afraid I failed at being Vulcan cos I got too mad and basically pushed him sharply so he careened into the barrier in front of the stage and fell over. Immediately, I regretted it. But this was after 90 minutes of him consistently hassling me and my friends, I’d had enough. We had all told him to fuck off numerous times. He didn’t listen.

And, of course, me pushing him means that he won. He successfully provoked me, which is what he’d wanted to do all night. What I should have done was to go and get a bouncer and get him chucked out.

Well, once I’d pushed him, he was on a roll, the weirdness doubled. So, I just left the club and came home early. I was seething when I did it but I was in control enough to know that it was either leave or actually get into a real fight with him which I would win physically but lose morally.

I have had this happen so many times now, it’s the one pain in the arse of being edge: putting up with dickheads. And the thing with druggies is they never remember they were being arseholes so the next time they see you, they think you’re being off because you refuse to be friendly! Like, half the blokes in Mosh I will not engage with because they have started shit with me when they’re high/drunk. And yet they look at me like I’m touchy or judgemental BECAUSE THEY DON’T REMEMBER DOING IT. Yes, mate, I’m not gonna shake your hand because last time your were out you called me a ‘fat fucking Paki’ and tried to push me over.

I am sick of this, of having my nights out ruined by other people’s addictions. I have had so many years of this that it just fucking grinds me down. Sometimes I wish there were straight edge clubs the same as there are gay clubs but I can’t think of anywhere in Britain the scene would be large enough for that to be financially viable.