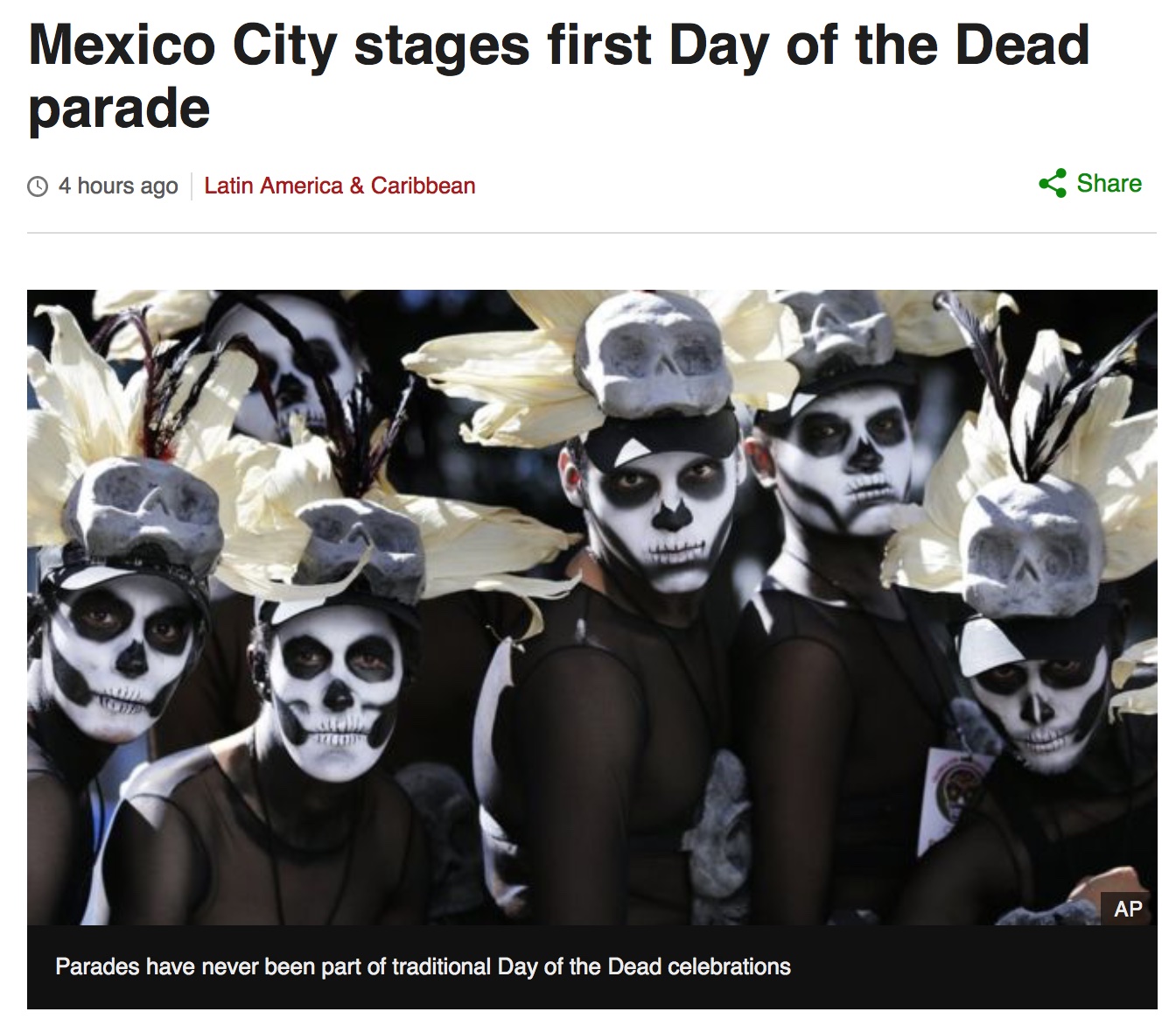 I acted alone and nobody told me to do it.

I did this because security is a myth.

Contrary to what you might have heard, my friend, you are not safe. Safety is a story, it’s something we teach our kids so they can sleep at night, but we know it’s not real.

Beware of cops and robbers, the kinds that rob your dreams. But most of all, beware of each other.

The world is going to crack wide open. There is something on the horizon. A massive connectivity. The barriers between us will disappear, and we’re not ready.

We’ll hurt each other in new ways, we’ll sell and be sold, we’ll share our most tender selves only to be mocked and destroyed. We’ll be so vulnerable, and we’ll pay the price.

We won’t be able to pretend that we can protect ourselves anymore. It’s a huge danger, a gigantic risk, but it’s worth it, if only we can learn to take care of each other, then this awesome new connection won’t isolate us.

It won’t leave us in the end so totally alone.” 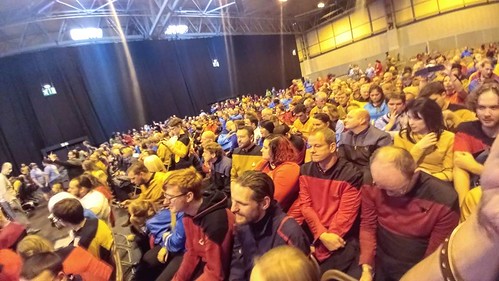 After the original series was cancelled, there was no Star Trek on television until the animated series in 1973. When the producers were casting the cartoon, they initially decided not to use George Takei and Nichelle Nichols. It would save money to get their roles played by other actors.

But Leonard Nimoy refused to work on the series unless the entire original cast was brought back. He believed that the message of Trek was one of diversity and no two actors better represented that ideal than Takei and Nichols. He stood up for his fellow actors in a way that is very rare in TV and film. 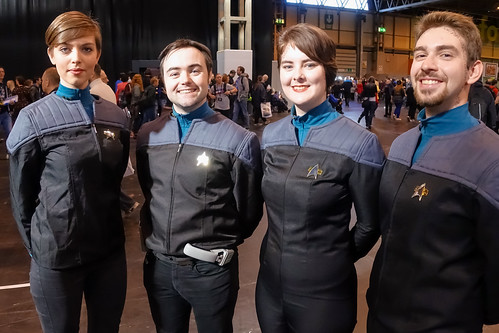 My feet hurt. I have Euclideanly flat feet so walking any distance is always a painful chore. My feet are red and will take a couple of days to recover from the weekend. They’re in that state because I spent the last three days walking round the NEC, the venue for Destination Star Trek 50. (The 50 stands for the fifty years since the original series’ first episode was first broadcast, way back in 1966.) My Trek buddy Nat and I joined thousands of others who all flocked to Hall 4 to see our idols in person and perhaps get their autograph or even a photo with them. 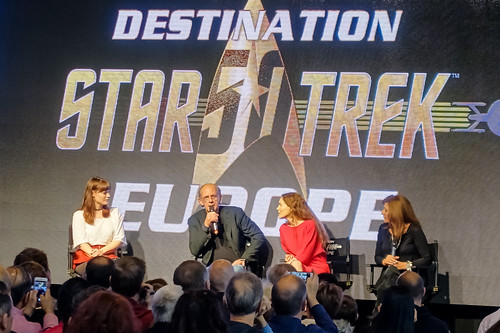 The event was chocker with Trek actors; Marina Sirtis, Alice Krige, Garrett Wang, Armin Shimmerman, WILLIAM FUCKING SHATNER…. Well, you get the idea. It was wall-to-wall famous faces. I heard Marina, Alice and Christoper Lloyd take part in a great talk about the differences between TV and cinema (well, it was meant to be, it covered a much wilder gamut, thanks to the always fabulous Ms. Sirtis). 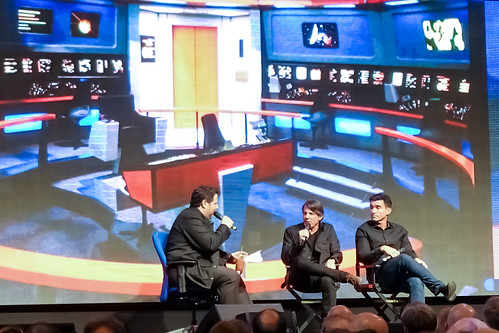 I also heard Adam Nimoy talk about his beautiful documentary, For The Love Of Spock and I have to confess that I was crying through a lot of that event. For me, Trek and Spock and my Dad are all interconnected. I miss my Dad so much and he loved Spock / Nimoy as much as I did. It was my Dad who introduced me to SF and Star Trek, we used to love watching it together, right up to the reboot films. When Nimoy died, my Dad was truly saddened by his passing. He would have loved Adam’s documentary had he lived long enough to see it.

Nat and I dropped in on other talks and competitions too. But we both agreed that the best part of the whole event was, as Adam Nimoy and Marina Sirtis both stated separately, the fans. 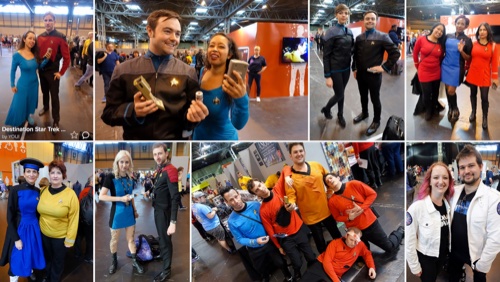 If you want a feeling of inclusion, if you want a feeling of being an un-judged member of a family, go to a Star Trek con. I talked here about the utopian and profoundly progressive DNA of Trek and the proof of that is in the fandom. In no other place will you find such open minds and open hearts. We don’t care about race or gender or sexuality or religion or physical shape. Hell, we don’t even care if you only know one show or only like one character. The MRA-fuelled bile of the gaming scene, the gatekeeping, bullying and sexist vitriol has no place in Trek fandom. Any Trek convention you go to will be the anti-matter version of a Trump rally. Take all that right-wing paranoia and hatred and fear and pessimism about the future and replace it with throngs of people who accept the beauty of infinite diversity in infinite combination. 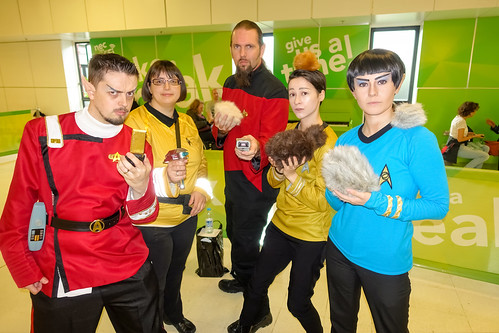 I wandered about all weekend, getting pics of fellow Trekkies and you can see for yourself the diversity of our cadre. Some of us are blind, some of us can see, some of us are bipedal, some of us are tripedal or roll on four wheels. Some of us are old and wrinkly, some are tiny, enthusiastic children, leaping about with glee. Me, I’m hugely fat and look uncannily like a perplexed walrus. None of that matters because we are the best people. 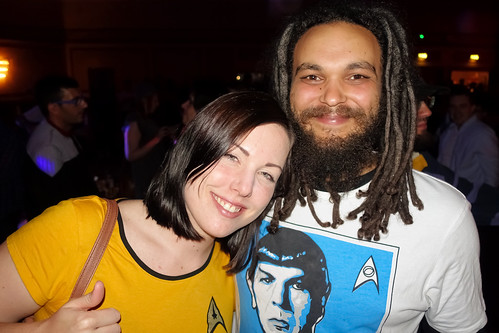 Why? Because we dream of a future that is the opposite of Theresa May’s desperate Norsefire manifesto. We dream of a future where Earth is at peace and education, healthcare and food is universally available and accessible. The people I met at DST50 are the best people. Overwhelmingly friendly, charming and geekily garrulous, I had a fucking blast this weekend. 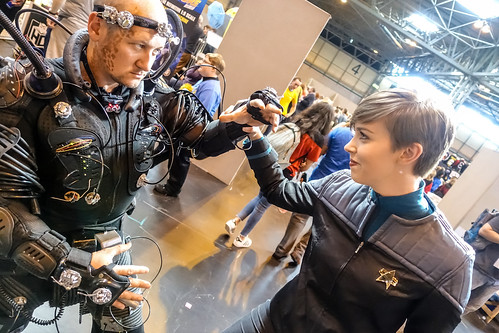 If you get the chance to go to a Trek con, pick out a costume (or don’t, if you’re shy, doesn’t matter!) and then GO. You won’t regret it. Promise.

Until then, live long and prosper. 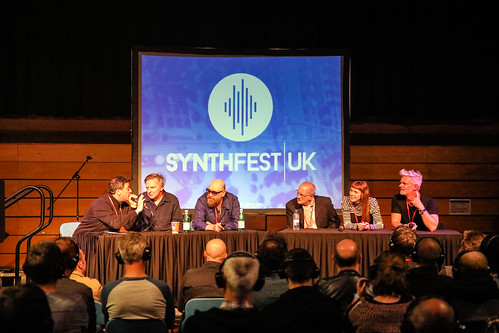 Yesterday, I caught the train up to lovely, leafy Sheffield and had fun wandering around Synthfest UK 2016.

Now, pretty obviously, there were many synthesizers there. Rare old analogue beasts like this EMS Synthi: 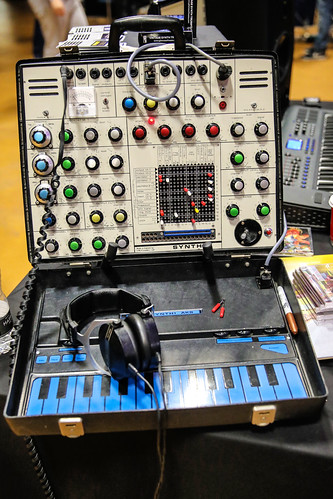 And the latest digital doodads like this nifty Modal hunk: 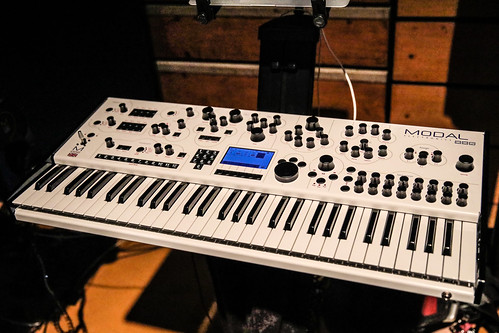 There were three areas, all of them packed with geeks playing and prodding and eyeing the stacks of modules available for sale. I had a play on the above Modal synth as well as fiddling with various modular setups as I passed. It was just *beautiful* to be able to see so much gear, much of it esoteric, in one place and there to use. I felt a bit stunned, to be honest and I’m sure more than a few fellow geeks I passed had the same glazed expression. We were like tiny, tiny children who’d been let into a toyshop and told we could play with anything. Where do you start? 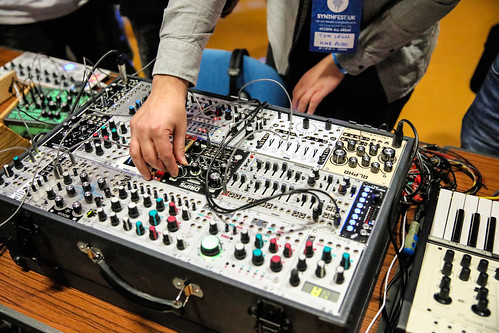 The main hall was filled with the most incredible burbling, bleeping, warbling cacophony of sound. It sounded like Bebe and Louis Barron scoring a Krell riot. The most popular bits of gear had lengthy queues of fidgety suitors, the least popular had a couple of people sitting behind a table, issuing the occasional desultory squawk.

I got to meet a couple of Sound On Sound peeps which was lovely, actually putting faces to names. We had lunch and ranted about various things but I admit, I indulged in a lot of shop talk because, hey, music tech geeks! I couldn’t resist! 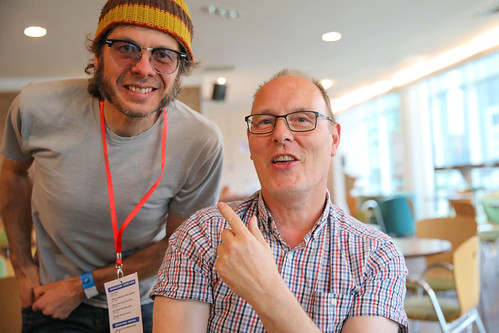 Then, later, I bumped into my old mate Stephen Bennett who I know from waaay back when I was living in Norwich. And he introduced me to his mate Jarrod, from I Monster. We coffeed and, again, argued vigorously about music tech. It was lovey to catch up with Stephen and meet Jarrod. Got to love someone who can appreciate a fine organ.

Then, back upstairs and back to the stridulations and twiddling. Oh, so much twiddling.

By the time I left, I was knackered and slightly deaf thanks to some geezer doing really heavy tweaking of the Oberheim at the GForce booth. But I was very happy to have been at such a vibrant event, crammed with gear and geeks. There’s a Flickr gallery below that will give a tiny slice of the day: 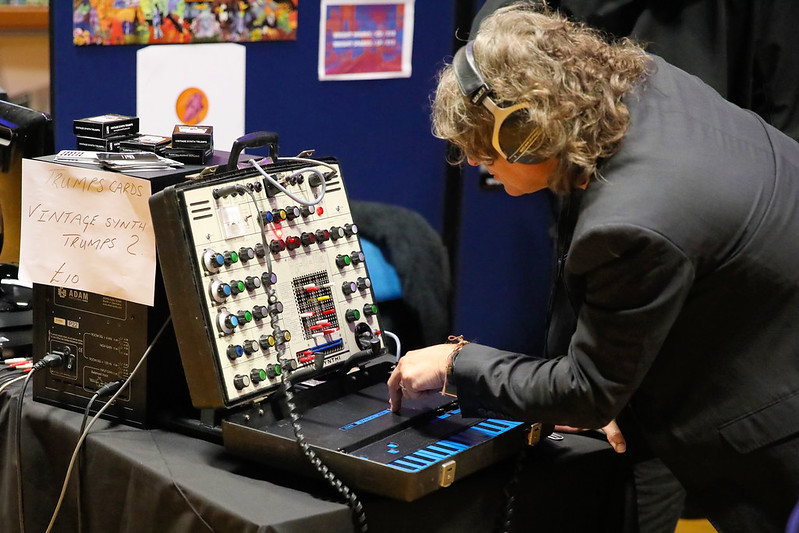