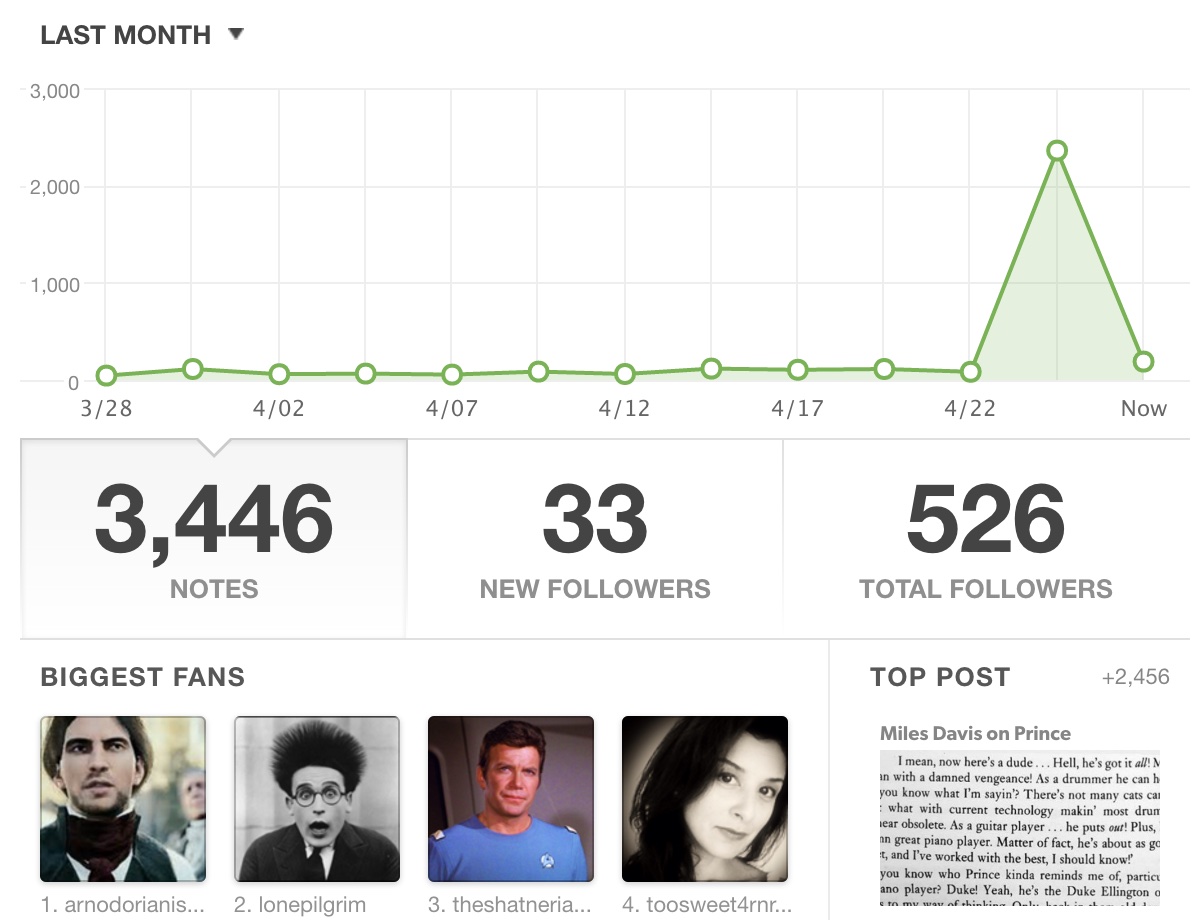 So, this is my activity view when I’ve actually had something get notes.

You can see how much that brief spike towers above my normal activity.

It reminds me of my musical career. 😛

I’m waiting for the flurry of notes to die down so normal bucolic service can be resumed.

Did you see 2012? That amazingly mad CGI fest about the coming end of the world:

I remember watching it and thinking, alternately, ‘HAH, THEY JUST FLEW THROUGH A SKYSCRAPER!’ and ‘why is Cusack in this? I mean, Harrelson I get, he’s goofing off on doing this totally gonzo character. But Cusack?’ And then ‘HAH, LOOK AT ALL THOSE TINY CGI PEOPLE SCREAMING AND DYING!’

And then some waves would lumber over mountains like sleepy jam or a monk would breakdance or some other shit.

In the film, they build some arks to save the elite of the human race, by which I don’t mean the actual elite, I mean politicians, plutocrats and a sprinkling of craven intelligentsia.

See, this is what’s happening now.

No. They’re all part of a the Sekrit World Gubmint’s preservation party. There’s obviously some kind of major Extinction Level Event on the way and thus they’re whisking away people.

Now, obviously, they’re taking scientists and teachers and plumbers and other essential people too. But we don’t notice their passing as, being humans, we aren’t logical. We notice the deaths of people who have affected our lives more than, say, the 500+ migrants who drowned in the Mediterranean this week. It’s cos we’re little shits. Human lives are very un-equal in our reckoning, as much as that shouldn’t be true.

The people we’ve sung along with, the people who made us pogo on our beds when we were kids, the people who wrote the songs that were playing when we first had sex: those people are ripped away from us and leave a raw, bloody patch.

On a spaceship just beyond the asteroid belt, there’s one hell of a jam about to start. 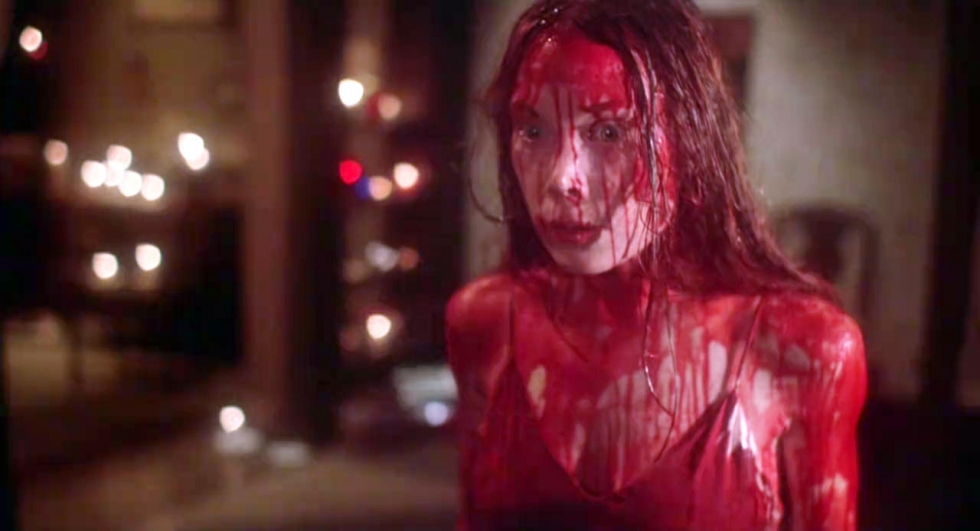 I woke up kind of with a start. I was lying on my back. Then I rotated and sat up, legs over the side of the bed.

Immediately, I felt water running down my face and chest. I looked down, it was water, it was blood sluicing out of my nose.

I rushed to the bathroom and looked at my face and chest, which were both very Carrie. Tearing up a bit of loo roll, I made a little nose-tampon. It went immediately crimson but staunched the flow.

I’m very puzzled by this nosebleed as:

1. I don’t really get nosebleeds.

2. It was really hosing out of there. Think when the psi kids attack people in The Fury. 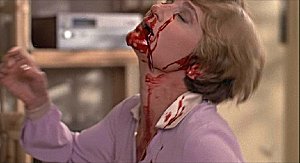 3. It must have started the instant I woke up. If it had started earlier, it would have overflowed my nostril / run down my throat. There was no blood on my sheets and I didn’t wake gargling haemoglobin so that didn’t happen.

If I saw this in a film, I’d be watching, nodding and waiting for all shitting hell to break loose. 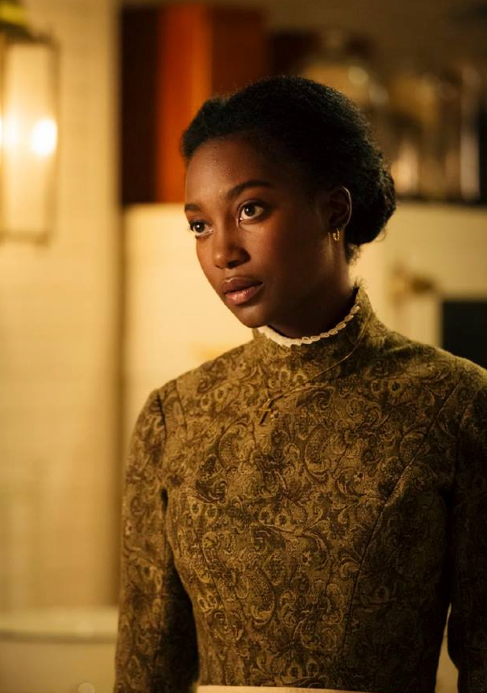 Now, I love Murdoch Mysteries… It’s light and playful and I love the Canadian-ness of it, much as I loved the Candadian-ness of Continuum.

But every since Mouna Traoré joined the cast… well, I’ve been hypnotised by her beauty. I think I have a crush. LOOK AT THOSE EYES… omg…

It’s all too much for my old heart to take… she’s just gorgeous!

And what makes it all worse is that she is brilliant in her role as Rebecca James. She exudes this mixture of vulnerability and quiet aptitude; she’s pitches herself perfectly as a black woman pioneering into previously white domains.

I’m watching the ep Colour Blinded now which features her flirting with a dude and when she opens those eyes up, wooaahhh… I’m dead.

I also love this ep because we’ve just had someone say that people shouldn’t be praised for simply doing what they should (referring to a white bloke playing the white saviour card and lionising himself).

And, yet again, like Ripper Street, we have a historical drama stoutly not portraying anachronisms and yet dealing with issues many contemporary dramas are too cowardly to address.

I’ve not read that, gimme a pointer!

The trouble with capitalism is that it’s an economic system whose time has passed. It’s as relevant and progressive as feudalism now. The profit motive is incompatible with paradigm-breaking innovation (where’s the profit in an ever-lasting lightbulb?). And it tends towards concentrations of wealth and thus huge inequality (hence the 1%). It also fosters monopoly and other hugely restrictive and anti-innovative practices.

For me, the basis of bourgeois economics is flawed *now*. We nearly have access to unlimited energy and unlimited resources. All it takes is one breakthrough in materials (100x more efficient solar cells / room temp superconductors) and we’re there. As for resources: if we could co-operate enough to get off this planet, think of all those tasty asteroids out there, even discounting the Oort cloud.

So, if you want an example of a post-work, post-capitalist future, that’s Star Trek. No money, no war (between humans at least), poverty and inequality wiped out. Star Trek is really COMMIES IN SPACE but I don’t think Roddenberry could have got away with calling it that.

Or, Iain M. Banks’ Culture. That’s very explicitly a socialist future paradise because we’ve relinquished control of a lot of autonomy to AIs. As with Trek, the major conflict is when The Culture encounters unfriendly outsiders.

Imagine if every human, all seven billion, could wake up tomorrow and know they had water, food, shelter, healthcare and education guaranteed. Throw in free childcare and broadband. Imagine the possibilities of all those humans liberated from subsistence drudgery. Free from war, from violence.

The little girl who invents room temperature superconductors may be alive now but if she’s going to be blown apart by one of Obama’s terrorist drone attacks tomorrow…. well, we’re fucked, aren’t we?

This is a star almost twice as massive as our sun, whipping itself around, a full rotation every 5.75ms.

What’s the fastest you can spin yourself round? I’m guessing it’s a lot less than 174Hz and you’re considerably smaller than JO437-4715.

I dunno. Astrophysics is more fantastic than most fiction I read. 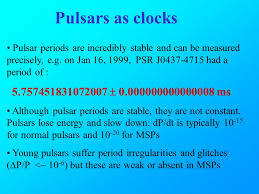 @protozoaradio? – this baby is apparently accurate enough to be used as a clock, it’s accurate to one part in 1015