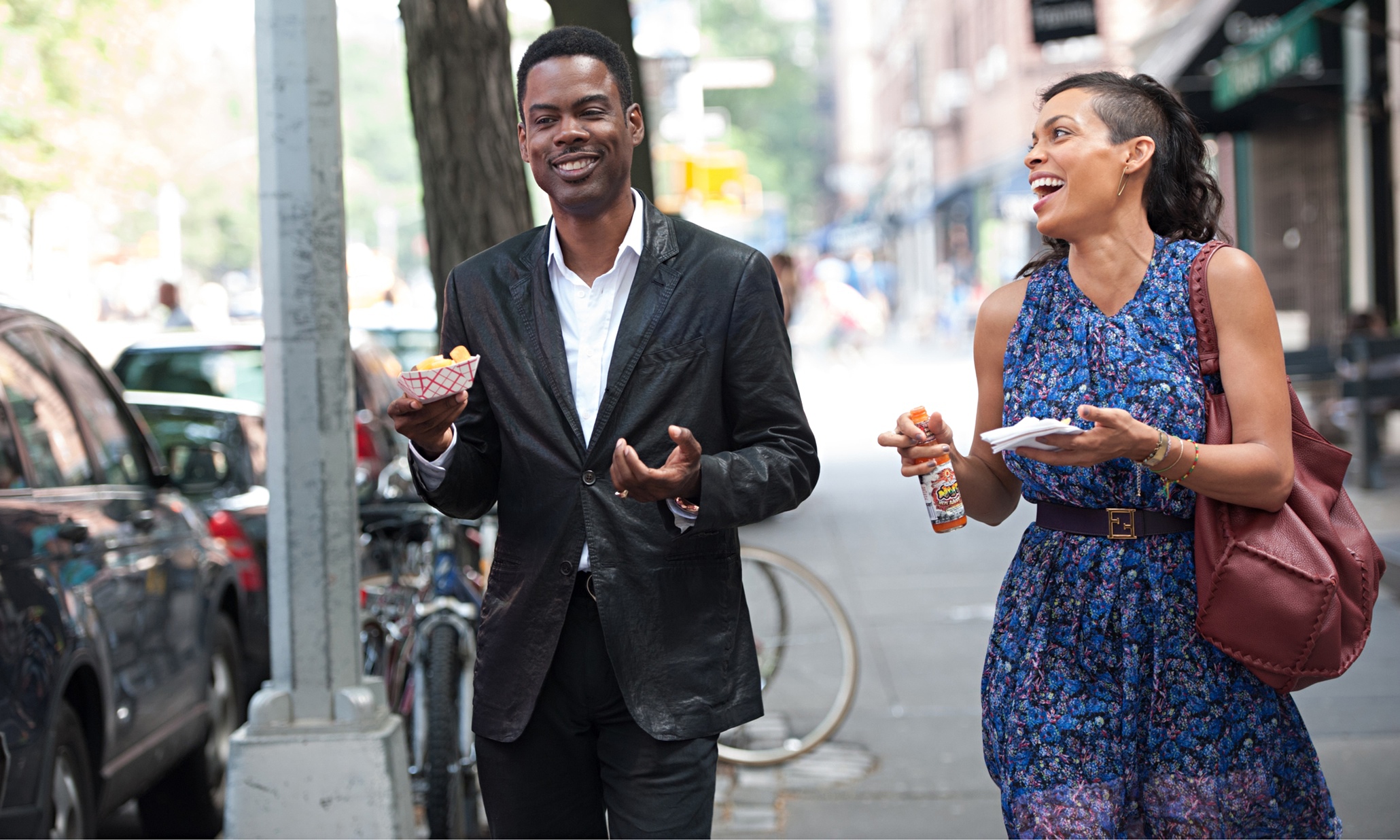 Now, onto the long version.

Chris Rock is Andre Allen, a hugely successful comedian. The trouble is that his success is based upon a character her plays called Hammy The Bear (in full bearsuit). Hammy is huge. Hammy is the guy. Wherever Allen goes, people shout Hammy at him.

But Allen wants to do serious work. He has the lead role in a film just opening which is about the Haitian slave rebellion. He’s doing his best to push the film and thus ends up being interviewed by Chelsea Brown of the NYT (Rosario Dawson).

Through a patchwork of interview questions / answers and flashbacks, we learn more about Allen’s career and recent sobriety. It’s obvious that Andre and Chelsea connect and here there’s a lovely lightness of touch ~ there’s no trembling eyelash moments or hands lightly touching bullshit, this is adult romance where it’s all about the micro-second pause, the feint and the parry of flirtation. It’s all light as a souffle and I welcome any romantic film that so successfully doesn’t make me throw up in my mouth a little. As a couple, Chelsea and Andre are believable and, more crucially, likeable rather than punchable.

So, well done on the rom.

The com part… well, what the fuck. We’re talking about Chris Rock here, one of the funniest human beings on the planet. You could get run over by a lorry, body smooshed across the road, have your intestines wrapped around your face as you scream in agony and Rock could pop a one-liner that would make you giggle like a baby. I am not surprised when Chris Rock makes me laugh.

What is delightful is the ensemble that Rock builds which serves to shore up the character history and also provides the best comedy in the film. The Top Five of the title is what Rock asks everyone: top five rappers. In one of the best scenes, Allen visits his ex and his old set of mates in their flat and there are moments here that you can tell are Rock ad-libbing like fuck and making the other actors lose it. I mean, later in the stand-up part of the film, you see actors acting at laughing: in this front room scene, it’s just people laughing, they aren’t acting. The scripted dialogue is as sharp as fuck and the un-scripted surpasses that. Rock’s badinage with the ever-lugubrious Tracy Morgan is pure joy.

The same kind of scenario is repeated in the later Bachelor Party scene but this time we have Whoopi Goldberg, Jerry Seinfeld and Adam Sandler shooting the shit, all giving the stupidest marriage advice possible. And they’re all, obviously, great, this is no stretch for them. There’s a kind of sweet, cosy warmth to seeing these comedians riff off each other, I suspect they weren’t sweating the acting.

Well, shenanigans take place, as they have to do in romcoms but it’s not the biggest surprise in the world when Chelsea and Andre end up kissing. What is nice is the ambiguity of whether they will get properly together, left until the very last shot of the film. Which is a neat way of avoiding the cheesy romcom ‘LOOK THEY ARE HAPPY AND WILL BE FOREVER, DIVORCE DOESN’T EXIST!’ ending shot.

Top Five when reviewed was compared to Birdman, Funny People and other highly-meta films. But all those numbnuts are wrong: Top Five is Stardust Memories. And it’s also the kind of Woody Allen film you would get if Spike Lee travelled back to 1983 and directed Allen.

I mean, COME ON, the central character’s last name is Allen! Rock knows exactly what he’s doing. Stardust Memories is a film about a famous comedian tired of doing comedy, wondering what the point of being a comedian is at all. He goes to an out-of-town film festival in his honour (”I love all your films, especially the early, funny ones!”) where he has a slight break with reality and his girlfriend. Throughout, we see flashbacks of his earlier life and we’re also treated to clips of his new SERIOUS FILM which both the studio and the public hate. Sound familiar?

What’s surreal is that a lot of Top Five is Rock and Dawson wandering around New York, just the same as Allen’s characters did in proto-romcom Annie Hall. But this is the New York that Spike Lee famously groused about in regards to it never being depicted in Woody Allen’s work: this is a racially diverse, real New York. I mean, I’ve only been to New York once but I can tell you, based on that, it isn’t a city whose streets are only populated by white, middle-class people.

We’re now in a bizarre AU where Chris Rock is basically playing a young, black Woody Allen in a brundlefly of Stardust Memories and Annie Hall.

And you know what?

I’m fine with that.

Top Five gave me a feel-good glow I haven’t had for a long while. Certainly not while watching a romcom. More commonly, I sit with my sphincters tightened, waiting for the inevitable bathtub of corny ickiness. Damn, it felt good to not hate a couple falling in love! Remember that? That feeling where you’re actually rooting for the couple to get together and go ‘awww’ when they kiss? It’s nice, innit?

On top of that, Rosario Dawson is a peerless actress. I cannot honestly remember her ever phoning it in or, conversely, chewing the scenery. As Chelsea, she creates this deep, strong character that you just want to hug, even when you find out she’s a big, fat liar. I want more Dawson, please. In everything.

Chris Rock is relaxed and loose and good. I’ve seen some reviews saying that he’s not acting in this but that’s patently bullshit: Rock is probably acting for 90% of his waking life. He’s a comedian, for fuck’s sake. I mean, I’m a musician, most musicians live and die unknown in poverty. Below us in terms of shitty jobs comes actor: your work relies on the approval of scores of strangers and you can’t succeed without the press. And the next level below that in terms of shitty job is comedian. You’re like an actor BUT you’re way more needy AND you have to try and make idiots laugh, on demand, whatever you’re feeling.

So, when critics have a go at Rock’s acting, I think they’re missing the point and they’re fools. This film is easier for Rock than stand-up: he gets takes here. If he flubs a line, hey, let’s go again! No problem! Stand-up, you flub a line and the whole crowd may turn on you and slice your skin off with razorblades. Of course Rock turns in an assured, believable performance – he isn’t new to this.

If you usually avoid romcoms, give this one a go. It’s way less forced and frenetic than the genre norm and so it’s a breath of fresh air. It also has the added bonus of being fucking funny.

Oh, and my Top Five:

And my six is: Masta Ace