SO… Murdoch Mysteries proud feminist streak carried on this week with an election special.

It was another deftly-plotted and sometimes unsettling episode. The scene where the two Drs. walk to the front of the polling line and then… nothing. They have to stand aside and let the men pass as they do not have the right to vote.

And, at the end, a little girl asks for the female candidate’s autograph. Well, this is Murdoch ~ every ep introduces me to more Canadian history and the little girl is called Agnes Macphail:

After amendments to the Elections Act by the Conservative Partygovernment in 1919, Macphail was elected to the House of Commons as a member of the Progressive Party of Canada for the Grey Southeast electoral district (riding) in the 1921 federal election. She was the first womanMember of Parliament (MP) in Canada. Macphail was re-elected in the 1925, 1926, and 1930 federal elections.

Macphail objected to the Royal Military College of Canada in 1924 on the grounds that it taught snobbishness and provided a cheap education for the sons of the rich and again in 1931 on pacific grounds.[3]

As a radical member of the Progressive Party, Macphail joined the socialistGinger Group, faction of the Progressive Party that later led to the formation of the Co-operative Commonwealth Federation (CCF). She became the first president of the Ontario CCF in 1932.[4] However, she left the CCF in 1934 when the United Farmers of Ontario pulled out, over fears of Communist influence in the Ontario CCF.[5] While Macphail was no longer formally a CCF member, she remained close to the CCF MPs and often participated in caucus meetings. The CCF did not run candidates against Macphail in her three subsequent federal campaigns. (Wikipedia)

I knew nothing about her MMA background then, all I knew is that this woman was utterly convincing as a super-badass agent. Unlike so much fighting in spy / action / superhero films, here was a protagonist who moved like a real fighter: the fluidity, the snakelike striking speed. SO FUCKING AWESOME. But it wasn’t just her fighting chops, she easily held her own against Michael Fassbender and has a wonderful, slow-burning cafe scene with Channing Tatum. And the fight scene with Fassbender?? The most disturbing fight scene I’ve seen since the Krav Maga in The Bourne Identity.

Next time was in Fast & Furious 6 in which she played a taciturn but equally physically capable federal agent. Obviously, she wasn’t the lead in this so there’s not enough Carano screen time. Something I hope will be remedied when she takes the lead in the live-action adaptation of Avengelyne:

Avengelyne was the most feared warrior in Heaven’s Warhost, having single-handedly broken into Pandemonium, the outer fortress of Hell, to confront the Devil himself. She is a fallen angel, banished from Heaven by God after being tricked into questioning his love for humans. Avengelyne was stripped of all her angelic abilities, other than her great strength and her blood, which, once extracted from her body, could be used as a weapon or a miracle once empowered by quoting verses from the Bible. Although he appeared truly angry, God was trying to prepare Avengelyne for a coming war for which she would need to be strengthened. (Source: Wikipedia)

Oh yeah. She is going to be magnificent!

And you’ll be seeing her in 2016 in Deadpool as Angel Dust…. 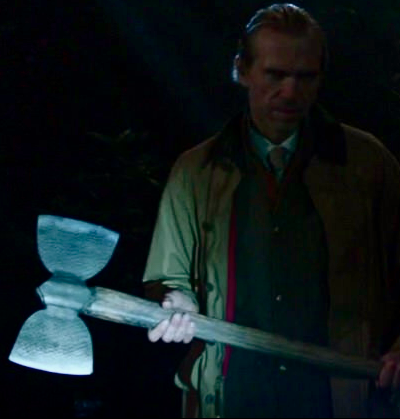 Watching this week’s Grimm and the baddy Leporem Venator is WELSH.

From the sound of it, south Wales, mebbe from around Merthyr.

As I lived in Pontypridd when I was a little lad, this made me happy. 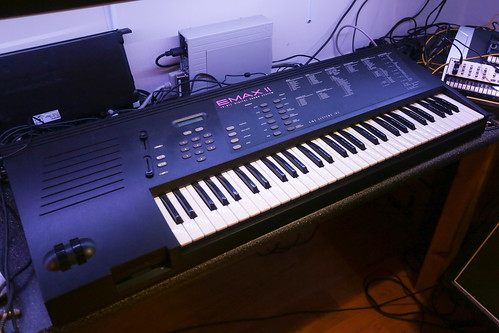 The sampler that I wrote Your Woman on, the sampler at the heart of a lot of my music twenty years ago was the EMAX II.

It was my first real sampler and I went mental on it. My previous experience was with a Boss RSD-10 which was wonderful but if you didn’t get the sample right first time, you were fucked. The Emax was a real sampler: editing, capture, mangling, envelopes, filters… So, I bought a load of floppies and went mad on it.

Wind forward to around 2000 or so. Sampling tech has moved on. The Emax II, which came out in 1989, was getting long in the tooth. And its 2Mb memory seemed limiting. So, I moved forward too, getting an Emulator 4XT rack unit. Eventually, I gave my Emax II away to a mate, knowing it would find a good home.

The years passed. Tech advanced inexorably, as it does. I bought other hardware samplers and never sampled into them. They were great as playback machines but the ease of sampling on the Emax was completely missing. Eventually everything became In The Box. I was a Logic Pro user, why did I even need an external sampler when I had EXS24 to play with? Here was a a soft sampler that could run rings around my missing friend in every way. Surely I could do loads of sampling with this fantastic doodad?

Like the old saying goes, the best camera is the one you have on you. And the best sampler is not the one with the highest specs or biggest library or most keygroups, it’s the one you actually use for sampling. I don’t want to play back other people’s sounds, I want to create my own sounds, sounds that no other human has ever heard before. I wanted an Emax II again!

When I unwrapped it, something rattled. I pretended I hadn’t heard it and hefted it into my studio. I plugged in my step-down transformer (don’t want to forget that and fry the poor thing!) and booted. And it worked! It even read my old floppy disks and I could load my Your Woman bank of sounds. That was spooky, hearing sounds that I’d created but not heard in over fifteen years. But for me to use the Emax II now, as a working sampler, it had to work with modern storage. So, I bought one of these: 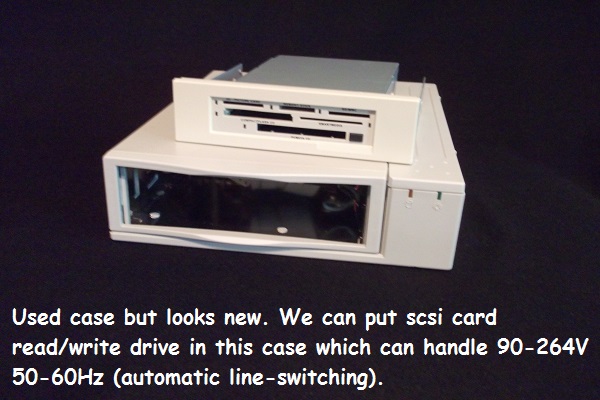 With this drive, I could fool the Emax into thinking it was talking to a hard drive when it would actually be talking to a compact flash card shoved into a PCMCIA adaptor. Do you see the levels of tech crust involved here? CF cards themselves are on the way out now, everything seems SD or MicroSD but here’s a CF card pretending to be a PCMCIA card shoved into a slot of a drive pretending to be an ancient SCSI hard drive. It’s so beautifully baroque!

I spent hours, days fucking around with the SCSI buss and the terminators, remembering every moment what a huge pain in the arse SCSI was back then. I bought another SCSI drive. That didn’t work either. I bought a SCSI Zip drive and that didn’t work. It was then that I had to face the painful realisation that the SCSI on my freshly-bought Emax II was, in all likelihood, fucked.

I gave it a kiss, shed a tear and after wrapping it in a blanket, I put it to rest in the Great Wardrobe of Elderly Keyboards in my spare room.

I tried to put it all behind me. Forget it all. But, while I had had it working, it sounded amazing. I expected it to sound a bit ropey but characterful, you know, like when you go back to an old video game that you remember looking fabulous but now it just looks like some Lego wombling around. Not so with the Emax II. It had sounded wonderful. It had full, deep bass tones and that fabulous filter… it sounded better than anything softsamplers like the EXS24 could chuck out.

Then, a few weeks back, I was in the danger zone, browsing Ebay late at night and I saw… ANOTHER EMAX II! This one was in Britain. It wasn’t expensive. I had to have it. I HAD TO, DO YOU UNDERSTAND? DON’T JUDGE ME!

When it arrived, it looked perfect, in far better nick than the rather weary looking sibling I’d locked away upstairs. No rattles either. I turned it on – yaay, it booted! I loaded some floppies, they worked. And then…. the big test. I got the CF->SCSI drive and hooked it up, stuck a card and left it to format. Previously, this is where the other Emax would hang. I came back after half an hour and THE CARD WAS FORMATTED. It worked, friends, it fucking WORKED!

So, I started to transfer my decrepit floppies onto snazzy, solid-state flash storage. Put in my Your Woman floppies and… DISK ERROR. CRC ERROR. ERROR after ERROR.

I almost wept then. I think a lesser geek would have built a bonfire of eccentric vintage samplers and had done with it. But that ain’t me, babe. I’ve wired Ethernet sockets, I’ve created Frankenstein-monster earbuds by soldering the tiny wisps of wiring onto new drivers, I’ve degaussed tape heads with pure thought energy… I wasn’t going to be beaten.

As a long shot, I took the SCSI drive with the formatted card upstairs and booted the other Emax after connecting it. Apprehensively, I  told the Emax to scan the SCSI bus and THE DRIVE WAS THERE! Looking online, I’d read that different Emaxes could be very temperamental with SCSI but sometimes worked when presented with a working, formatted drive. Look, I know it sounds mental but don’t question it, alright? I took all the floppies the new Emax II couldn’t read upstairs and then loaded them on the old one and then copied the banks over to the CF card.

I brought the drive back downstairs, crossed my fingers and booted and then… 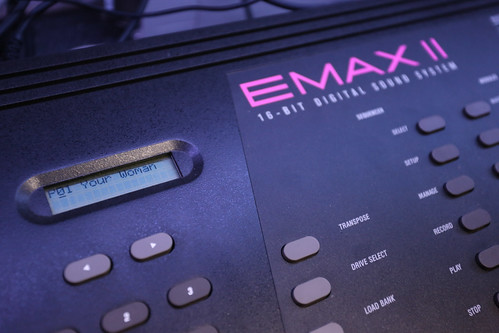 So, now I have a lovely Emax II back in my studio. I’ve been sampling on it, getting into that whole Alan Wilder vibe with it, y’know:

With the CF storage, it transcends hipster gear fetishism and is a viable, modern instrument.

More than that, the Emax II remains a beautiful instrument. It’s the easiest sampler to sample on and its converters and filters give it a character that no modern samplers, soft or otherwise, can match. It is alive, like a piano or guitar, it is unpredictable, capricious and utterly, utterly marvellous.