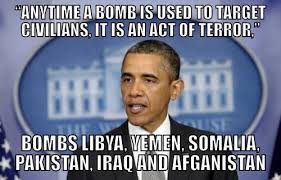 The UN and human rights groups have called for the prosecution of US officials involved in what a Senate report called the “brutal” CIA interrogation of al-Qaeda suspects.
A top UN human rights envoy said there had been a “clear policy orchestrated at a high level”.

The CIA has defended its actions in the years after the 9/11 attacks on the US, saying they saved lives.

Unsurprisingly, mass-murderer and torturer Barack Obama said it was time to “move on.”

Nothing about prosecutions for war crimes, nothing about the lives destroyed by the US and CIA’s wave of international kidnappings, torture and terrorism.

The biggest terrorist state in the world today: the USA.