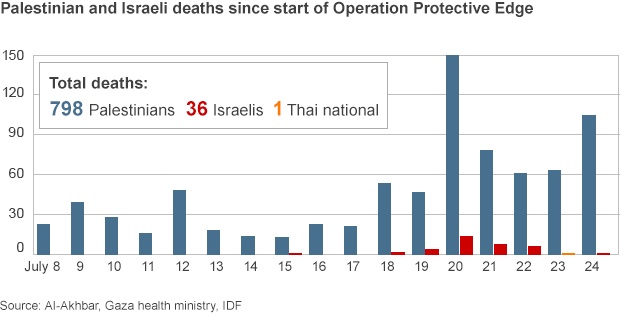 The overwhelming majority of those killed are Palestinians – at least 798 have died since 8 July, including about 185 children and 93 women, Gaza’s health ministry says. The UN says around 73% of the Palestinian dead are civilians.

Although the BBC frames it as ‘800 on both sides’ the truth is that 20 times more Palestinians have died compared to Israelis. Israel claims to have killed 200 “terrorists” but that estimation is as trustworthy as Obama’s drone terror defence.

The world at large has done nothing. The USA, as ever, defends Israel’s war crimes against children. Can you imagine if North Korea or China had killed 185 children in the past week?

What if Russia had shelled and killed 185 children? America would be spouting angry rhetoric continuously. Our screens would be swamped with Obama’s angry condemnations.

But when it’s Israel committing crimes against innocent civilians, the USA gives it a free pass.

Of those Israeli deaths, only three have been civilians. I’m not minimising those lives lost but compare that to 800 civilians killed in schools, hospitals, just little kids playing on a beach.

The viciousness of the Israeli assault on Gaza and the total lack of any adverse commentary from the US or UK shows what a mockery the morality of our Western governments is. 185 children are murdered and our leaders say nothing.