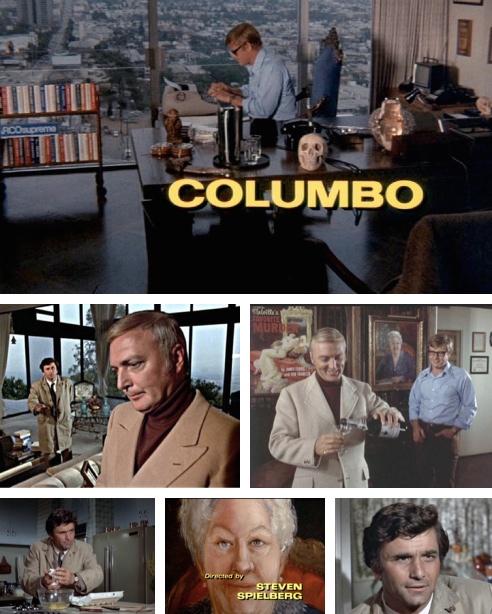 I’m currently watching the first ever appearance of Peter Falk as Columbo, 1971’s ‘Murder By The Book.’

Written by Steven Bochco and directed by Steven Spielberg, it’s a masterclass both of ’70s US television and of the delicate pacing and character-study that’s been lost in contemporary TV.

Jack Cassidy, playing the murderer Ken Franklin, is perfect. He pitches a wonderful psychopath,  arrogant and initially dismissive of Columbo but also elicits some sympathy when being blackmailed by the equally adept Barbara Colby as a local storekeeper with stalker-ish designs on him.

Every shot is framed beautifully, a pre-echo of what Spielberg would produce in his directorial debut ‘Duel,’ the same year. And this is only four years before ‘Jaws‘ propelled him into stardom. Really, if you’re a young director, this episode of Columbo is chocker with lovely little pans, perspectival tricks, light tricks ~ the whole shebang. Spielberg was having great fun playing around, it’s obvious. Bocho’s script creates a rich playpen for Spielberg, full of delicate touches of character and set pieces that unfurl organically around the rumpled Columbo. A year after writing this, he wrote one of the best hard SF films ever, ‘Silent Running.’

So, a stellar supporting cast and a couple of actual geniuses as writer and director. And then, in walks Peter Falk. It’s impressive how fully-formed Columbo is in this. Falk has the bemused observations and tricky little traps all here, present and correct: the cigar, the coat, the fumbling around for his badge – check. However, Columbo’s greatest weapon is his indifference to being viewed as stupid or inept, the antithesis of Poirot. Practically every murderer he’s trapped has underestimated him, patronised him and thus been nabbed. Columbo’s scenes with the Franklin in this episode lay those foundations out.

In contrast, when Columbo is with relatives of the victim, with anyone who is actually in pain because of their loss, he is an entirely different character. Confident, assertive, comforting, concise and authoritative. When these characters ask him questions, he never equivocates, there’s never any ‘just one more thing.’ In the hands of a lesser actor, this juxtaposition of traits might have seemed false and unseat the whole character and show. With Peter Falk, that’s never even a question. He creates a Columbo that is whole and believable and is ruthless in his pursuit of the murderer.

I’m now up to the scene where  Columbo confronts Franklin. It is pure magic. Spielberg is switching between what looks like 40mm close-ups with 80mm long shots, the shots are tight and uncomfortable, the angles unsettling. Bocho’s dialogue changes rhythm, snappy and insistent where before it has been playfully-scampering fencing. Falk drops all the bumbling now, he’s  a bloodhound snapping at Cassidy’s heels until he brings him down. But he doesn’t gloat; Columbo never gloats. He always looks solemn and perhaps a little sad that he has to do this job at all, that humans can be so evil.

‘Columbo’ will always be my favourite detective. As much as I love Marple and Poirot, Morse and Lewis and every incarnation of Sherlock, there is something about Peter Falk’s rendering of Columbo that makes the detective seem more real, more human than any of those sleuths.