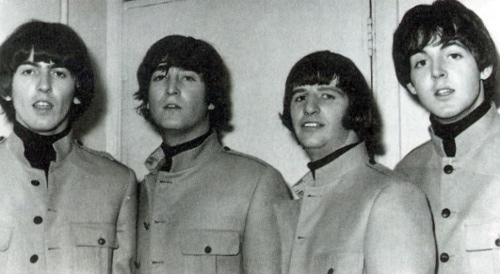 I don’t fall into an intense rage when I see white girls wearing mehndi. Or, for that matter, when white people wear pyjamas, use the word ‘thug’ or the numeral for zero, Indian things that have been so absorbed into Western culture that their roots are forgotten.

As long as they’re not doing it in a racist, demeaning way, I also find it cute when white people dress up in Indian clothes, like the Beatles in their Nehru jackets. If a white woman goes through the effort of donning a sari, it’s a compliment and I take it as such.

(There always has to be a but, doesn’t there? Sorry!)

We can’t leave issues of imperialism, colonialism and neo-colonialism un-addressed. Here’s an example:

When a white musician/band ~

Then no-one bats an eyelid. Critics will probaby praise them for looking further than their own culture. They will be seen as innovative, challenging, embracing multiculturalism. Fair enough.

Now wind back to the first White Town gigs I did. White people asked me:

Do you see my point? Now, that was a long time ago but even now, being non-white in a lot of popular music cultures is to be in an eternal minority. To be in a band in one of those genres is to be ultimately exotic. I’m still, weekly, the only non-white person in the club or at the gig.

I believe in multiculturalism the way I believe in rain: because it is the truth of the world. We have always lived in a melting pot, ideas cannot be owned by any one ethnic group, they exist as memes in the original Dawkinsian sense of the term, spreading, mutating, evolving. Indian numerals were transported to the West by Arabian traders and scholars where they blossomed because they were more efficient than the clumsier alternatives. Mathematics doesn’t care about borders or the colour of a person’s skin (although mathematicians may do). African and European cultures met and collided in America to produce jazz, arguably the single greatest artistic innovation of the 20th century. Similarly, four white, German blokes in a band called Kraftwerk became the seminal influence in electronic music, including electro, hip hop and every other genre driven by electronic instruments.

All that is beautiful, all that is why humanity makes me happy and hopeful.

But when non-white people like me are told we can only act or speak or dress a certain way or we’re “acting white,” that’s where I see that neo-colonialism lives on in our culture today, never questioning white right to anything, anywhere but always, always trying to put the uppity natives back into our little huts where we belong.

There was a recent post I saw on Tumblr which was basically laughing at a Korean rapper for no other reason than he was Korean. If he’d been doing exactly the same thing and been black or white American, no-one would have cared. The hilarity was specifically directed at his non-Koreanness. When I watched the video, I thought of the effort it must have taken this person to get where he is, the hours of practice, the love of hip hop and all he’ll see in his comments are jokes about his ethnicity.

Even though I’ve grown up in England, my Indian-ness will always be questioned because I don’t make bhangra (which, by the way, originates a thousand miles away from my part of India). I’m old so I can brush this ignorance off but it makes me sad when I see younger people getting shit for not conforming to the neo-colonial coolie ideal.

So, stick those bindis on, white girls (and boys, if you feel like it, hijra-style), flaunt those dreads, mangle those kanji in your tatts but please, please allow us the same freedom in return.

No-one owns anything. It’s all out there for grabs.