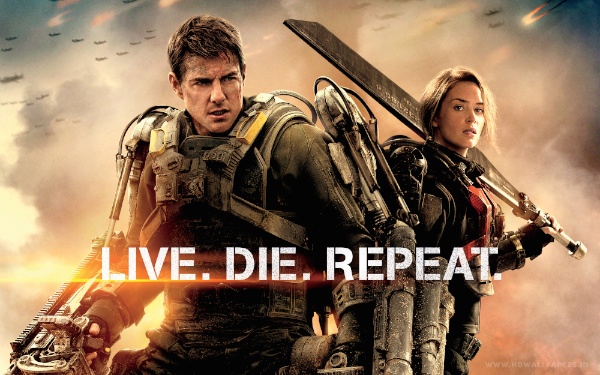 I’ve just got back from watching ‘Edge Of Tomorrow’ in splendid IMAX 3D at Notts Cineworld and my brain is still buzzing, sorting through the plethora of ideas, references, jokes and downright weird bits in the film.

AS USUAL – SPOILERS! DO NOT READ BELOW THIS LINE IF YOU HAVE NOT SEEN THE FILM!

Based on the mega-successful ‘All You Need Is Kill,’ ‘Edge Of Tomorrow’ is many things: military SF, ‘Groundhog Day’ (and, to a lesser extent, ‘Source Code’), rollicking adventure yarn and very, very slow romance (there’s only one kiss in the whole thing). I’m going to try to tackle each part of it but first a brief synopsis.

Tom Cruise plays William Cage (Keiji, geddit?), a PR man for the worldwide human military (the UDF, gonna love that in Northern Ireland!) in their battle against alien invaders, the Mimics. Through a series of quite bizarre events, he ends up outside of his comfort zone, taking part in what is meant to be the final offensive against a cornered and beaten aggressor. Instead, it turns out to be an ambush and he dies on the beach in the process of blowing up a boss Mimic called an Alpha.

When he wakes up, the day has reset, Bill Murray style. But instead of the mundane minutiae of being trapped in a snowbound town in thrall to a fat rodent, he’s back at the start of his hellish day and gets killed again. And then again. Each time he dies on the beach, he resets. In one of the loops, he tries to save the life of Emily Blunt’s character, Rita Vrataski, who is a formidable warrior and literally the poster girl for the human resistance. Before she dies, she tells him to ‘come and find me when you wake up.’ Thus, we learn that she, too, used to be Groundhogging until… well, I’ll leave that for you to find out.

I don’t think it’s too spoilery to say that they eventually vanquish the Big Bad Alien Mama Thingy. But that really isn’t the point of the film.

All of the struggle to defeat the Mimics is incidental to the real core question of the film which is exactly what it was in Groundhog Day: what would you do? Would you hone your combat skills and attempt to save the world or would you eat loads of cakes and then become a master of ice sculpture? We’ve seen this all before. Yes, I know that saying that is more than a squint ironic but that’s the arena ‘Edge Of Tomorrow’ inherits. You could simply view it as ‘Groundhog Day’ with shooting and aliens and you wouldn’t be far wrong. But you would leave out so much.

‘Edge Of Tomorrow’ shines when it demonstrates horribly how many repeats Cage has been through by showing his progress from trembling coward to ruthlessly efficient soldier. In the course of this development, we’re given plenty of standard military SF tropes to grope: exoskeleton fighting suits, a squad of reprobates who eventually come good, the carnage of war with body parts flying all around and, handily, unquestionably evil aliens who it is A-OK to exterminate en masse. This is where the film feels most creaky and unadventurous: war itself is never questioned or challenged and I don’t feel the pre-story shows enough worldwide human tragedy to warrant that lack of inquiry. Still, Cruise handles the progression in character with aplomb, playing Cage as genuinely a bit slimy and manipulative at the start before hundreds of deaths imbue his soul with more weight.

Blunt is perfect as Vrataski: she is hard as fucking nails but not some cigar-chomping FEMALE SOLDIER YESSIR! stereotype that we’ve seen in so many SF films. She is a soldier but she is human and Blunt brings all that through with a the deftness of an expert magician. I didn’t notice she was doing things to inform her character, I just noticed that my idea of Vrataski changed. Perfect sleight-of-actor’s-hand.

I loved that although Cage seems to be attracted to Vrataski from the start, the film doesn’t degenerate into love in the trenches drokk. The romantic side is played so well and so sparsely that I thought it was kind of spoiled by the eventual face-mashing. I don’t think the film needed the kiss, I think Hollywood did. Would it hurt soo much to have a het female and male just be comrades in a film and nothing more?

What makes ‘Edge of Tomorrow’ such a good film is not where it ticks the boxes of a big-budget Hollywood action film but in its margins where it does little things that bring it to life. You know, exactly the opposite of any Michael Bay film. Whether it’s the English bloke who likes to go into battle balls-out (yes, literally) or Bill Paxton’s extraordinary turn as the irascible and didactic Master Sergeant Farell, ‘Edge Of Tomorrow’ is replete with nuances and references. And that’s on first viewing, I know when I see it again, I’ll spot more. There are so many puzzling little touches, one being Vrataski’s battle sword. I know this was a feature in the original novel but in the film, it’s looks to me very much like a helicopter blade. So, when a helicopter turns up later on… You see what I mean? The film is constantly teasing you and forcing you to try to solve the mystery of it in the way that standard screen military SF never does.

Add to that a cast that is faultless. Every single actor, no matter how small their role (hello Astrid from The Tomorrow People!) weaves a part of the coherent, solid whole. Yes, it’s largely a tag team with Blunt and Cruise but without Paxton, Gleeson et al, the world wouldn’t have been both so real and therefore so disturbing. Props also to Noah Taylor who has never turned in a bad performance in his entire career.

So, ‘Edge Of Tomorrow’ is all I said it was: military SF with a ‘Groundhog Day’ twist and a faint sprinkle of romance. But it is more than that description encapsulates. It’s an action film with real heart where you actually give a shit about the lives of the characters, even as you know you’re going to see them die horribly multiple times. And it’s a popcorn film that will leave you musing about your own reality, life and choices hours after seeing it.