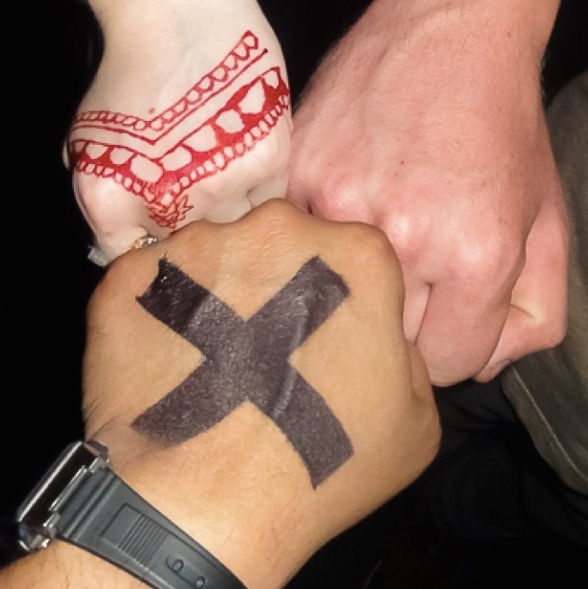 When I meet vegetarians or vegans, I don’t start saying shit to them like, “OH, BUT WHAT ABOUT CARROTS? WHAT ABOUT THEIR SUFFERING? WHAT ABOUT THE POTATOES YOU’RE BRUTALLY MURDERING IN POTATO ABBATTOIRS?”

Why? Because I’m not a fucking dick. They’ve chosen to live their lives differently to me and I respect their decision even if I don’t agree with it.

Similarly, even though I’m straight edge, when I see people drinking or drugging, I don’t start shouting, “HEY, WEAK-MINDED FOOLS!! WHAT’S IT LIKE TO BE ADDICTED TO THE TEAT OF EVIL CORPORATE BREWERIES AND INTERNATIONAL DRUGS CARTELS??”

Why? Because I’m not a fucking dick. They’ve chosen to live their lives differently to me and I respect their decision even if I don’t agree with it. Now, if someone who isn’t edge asks me about it, I’ll be only too happy to explain what it means to me. But as my straight edge comes directly from being an atheist and materialist (and in fact drew me into dialectical materialism), my edge may not be the same edge as anyone else’s.

So, I get pissed-off when, even though I’m not hardline, even though I don’t go around preaching to people, I constantly get shit from drinkers and druggies. And one of their favourite clichés is:

“YOU DON’T DRINK / SMOKE WEED / DO COKE / INJECT PEYOTE IN YOUR EYEBALLS BECAUSE YOU’RE A CONTROL FREAK. YOU’RE SOOOO SCARED OF LOSING CONTROL! WELL, LIFE’S ABOUT ADVENTURE, LIVE A LITTLE AND LOOSEN UP, MR. BORING EDGE!”

Here’s the thing, fuckwits. I’m 47. I’ve been gigging in bands and going to nightclubs since I was 16. I have had so many awesome nights out full of adventure and madness and Molotov cocktails and shoplifting and getting knocked over by police horses and the most intense, meaningful 5.30am romance.

And I remember every single second of it.

While you’re passed out with puke down your front, I’m still partying. Or I’m having the most awesome conversation ever with a stranger who’s about to become a best friend.

So, your argument about adventure and life and all that: I win!

When I go out clubbing, like I’m about to in two hours, I have no idea what the night will bring. Maybe it’ll be magical and all the right songs will be played and I’ll end up meeting new mates and dancing with random beautiful women all night.

Or maybe it’ll be non-stop chart indie music and the place will be full of football lads and other assorted bell-ends, doing comedy moshing and being alternately sleazy and aggressive.

Who knows what will happen? I don’t. I like chaos, unpredictability, I’ll take the universe as she comes, thank you because I’m straight edge.

Whereas, drinkers and druggies are so fucking anxious about having a good night out that they have to medicate themselves with psychoactives in order to guarantee they have a good time or indeed even have the confidence to dance or talk to other human beings.

Now, you tell me, who’s the control freak here, hmmm? Me, who takes life as it is or drinkers/druggies who cannot function without a warm cocoon of their choice psychoactive to take the edge off.

Seems to me like you need to let go a little, live a little, have some adventures that don’t involve buying a product in order to feel alive.

Now, please get the fuck out of my face with your tedious bullshit.