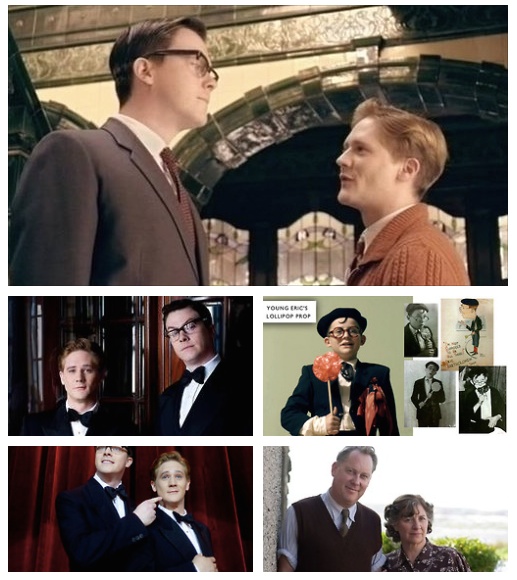 I’ve seen it before but just got hooked by the first five minutes because it’s perhaps one of the finest docudramas I’ve ever seen. I can’t fault anything about it: screenplay, direction, casting, acting, costume, sets ~ everything is perfect.

The actors playing Morecambe and Wise are uncanny in their rendition. And they would have to be: millions of Brits like me have watched hour upon hour of Morecambe and Wise, we know every tiny inflection, gag and tic of their onstage personas. Daniel Rigby plays Morecambe, Bryan Dick plays Wise and their performances would be Oscar-winning if anyone in America knew who Morecambe and Wise were. Watching now, if I close my eyes, their voices are so spot-on, it’s quite spooky. Both actors have difficult jobs here for different reasons. Dick manages to capture Wise’s speech, mannerisms and even body language perfectly and yet, just how would you do an Ernie impression? I don’t understand how he carried it off, it is magical. On the other hand, everybody and his Mum does a terrible Eric impression so Rigby could easily have fallen into that trap. But he sidesteps it deftly, bringing real delicacy (and his own stand-up timing) to both the funny and the sad Morecambe. I really can’t praise the central actors’ performances enough, had either of them played a bum note, the whole thing would have collapsed.

Their performances are framed by equally expert turns from Victoria Wood and Jim Moir (Vic Reeves) as Morecambe’s Mum and Dad. Having two veteran comedians playing the parents was a brilliant casting choice, their timing is, of course, impeccable. Moir drops some wonderful one-liners with languid, deadpan timing. Still got it. Wood has fewer opportunities to clown but she does have her own great comebacks and sly observations.

‘Eric and Ernie’ was originally broadcast in 2011 and since then there have been a few biopics of beloved Brit entertainers, the latest being of Tommy Cooper. Where this differs from those forays is that the screenplay doesn’t needlessly over-dramatise the history. There is a huge temptation with comedians to do the cliched TRAGEDY BEHIND THE LAUGHTER and I’m relieved that ‘Eric and Ernie’ doesn’t do that. But it doesn’t whitewash the difficulties they had when they initially flopped on TV and some of the stickier moments of their working partnership. It’ll never happen but I would love to see Rigby and Dick reprise their roles in a follow up one day, seeing Morecambe and Wise at the height of their career. They would kill the Previn sketch.

If you’ve never seen this, download it, buy the DVD, whatever. It’s a beautiful piece of drama about the best double act in the history of comedy. Morecambe and Wise were peerless and this film is a fitting tribute to their marvellous talent.