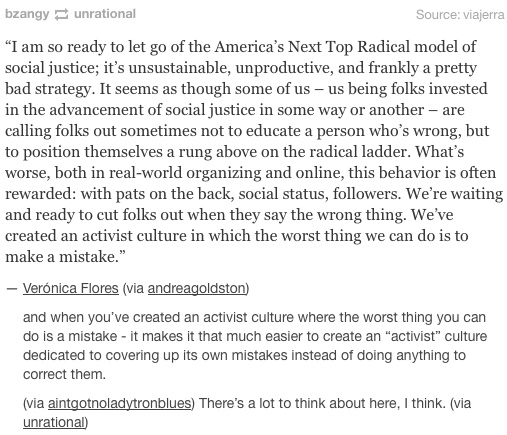 This is particularly the curse of Tumblr. I see nationalistic bullshit posted up by fake internationalists, I see misandry posted up by fake feminists and a thousand other elementary errors that are the mark of the middle-class dilettante and the blowhard.

Then these people go out into the world and misrepresent the most liberating, the most powerful ideas in history. Their ignorance is matched only by their intransigence, elitism and petit bourgeois sectarianism.

Read feminist theory, read socialist theory, don’t just play at it. And then patiently explain it, again and again.

As an Indian, I’ve engaged with actual racists in fascist parties, trying to make them see how they were being duped by capital. I’ve done this as they’ve been throwing racist insults in my face. That’s what we do: we engage and debate and present the facts to whoever needs to hear them.

Lenin had this covered years ago:

To reject compromises “on principle,” to reject the permissibility of compromises in general, no matter of what kind, is childishness. A political leader who desires to be useful to the revolutionary proletariat must be able to distinguish concrete cases of compromises that are inexcusable and are an expression of opportunism and treachery.
~ Lenin, Left-Wing Communism: An Infantile Disorder (1920)

If you want to help the “masses” and win the sympathy and support of the “masses,” you should not fear difficulties, or pinpricks, chicanery, insults and persecution from the “leaders,” but must absolutely work wherever the masses are to be found.
~ Lenin, Left-Wing Communism: An Infantile Disorder (1920)