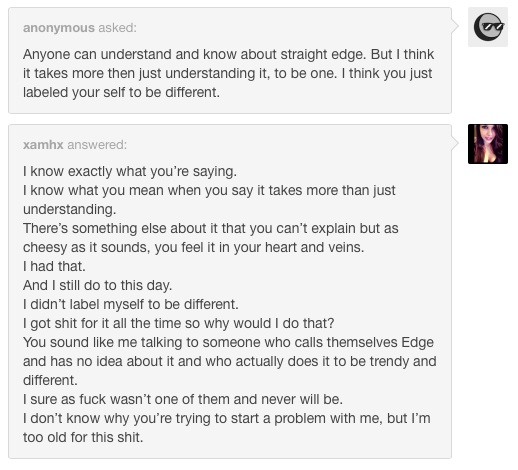 Beyond abstinence, edge is anything you want it to be.

Fuck a set of rules, it’s not a religion. Because I’m old, the wrong colour and not cool, snotty kids, edge and not, often ask me questions, testing whether I pass their GRAND TESTS OF EDGE. Y’know, like dickhead blokes do to women/girls to test whether they’re “really” into comics/games. I felt excluded from calling myself edge for years because of this general wankery, because I was foolish and didn’t fit in. I know better now.

I find it particularly humorous when newbie edge kids lecture me about it because they’ve got a hoody and a couple of tatts. Invariably, I see them drunk / pilling it at a gig a few months later. And I remain as sober as I was in 1982, 1992, 2002, 2012 and last night.

My Xes wash off the back of my hands but they’re a deeper commitment than their tattoos.

Straight edge is the avoidance of exogenous psychoactives based upon a conscious, positive, self-affirming philosophical mindset. It is seeing the unclouded beauty of every sharp, precious moment. Our sensoria see in natural technicolor. We have higher highs and lower lows, we have no psychoactive safety nets. We stay up till dawn talking shit and we remember every glorious, ridiculous word.

But that’s just what I think. I could, of course, be entirely wrong.