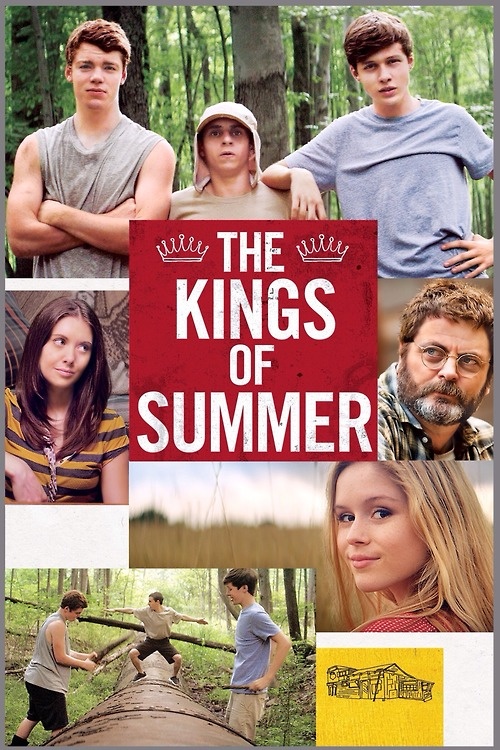 I watched this today because Mark Kermode pointed me towards it in his Kermode Awards. I’m glad he did, otherwise I might have missed out on a charming, funny, sweet film.

‘Kings Of Summer’ centres around three teenage kids who decide to run away from their homes for varying reasons. Joe (Nick Robinson) because of the fractious relationship with his Dad (Nick Offerman), Patrick (Gabriel Basso) because of his hyper-nice parents (Megan Mulally and Marc Evan Jackson) and Biaggio (Moises Arias) because he’s basically a mentalist with a machete.

Joe believes that by living in the wild, they can finally become men so they set out to achieve this and, in some ways, they do. These sequences are some of the most beautifully shot in an overall gorgeous film ~ Ross Riege has managed to capture the summer sun in ways that make you feel that it’s gently nuzzling your skin. Complications to the nature idyll ensue when a supercute girl, Kelly (Erin Moriarty), enters the scene.

This is a little gem of a film because everything is pitched perfectly. Whether it’s the broadest, stupidest comedy or the righteous anger of friendship betrayed, the cast and director Jordan Vogt-Roberts hit the target. The breadth of the film may cause problems for some viewers who prefer their genres more constrained. For me, it made it seem more realistic in that the kids were kids but they were also extraordinary, the parents were annoying but they were also human.

Above all, this is a fucking funny film. Moises Arias is a comedy genius, delivering some of the stupidest things a human being has ever said with mastery, displaying his chops as an actor: his character could not be more unlike that of Bonzo Madrid. Obivously, all the actors playing parents are no slouches themselves comedically and Offerman, Mulally and Jackson are light, natural and totally nuts at the same time as being believably distraught at their sons’ disappearance. That’s hardly an easy gamut of emotions to cover.

Basso, Robinson and Moriarty deliver performances that are dynamic, detailed and, above all, realistic. Incredible work from young actors who, at the time of filming, were all still teenagers. This is where ‘Kings Of Summer’ most reminds me of ‘Stand By Me’ in that the central performances by young actors are easily as good as actors two or more times their age. If these kids are this good now, what the fuck are they going to be like in a decade or so?

But great actors, stunning photography and a sharp director still mean nothing if the words fall flat. The last ace that ‘Kings Of Summer’ has up its sleeve is a script that’s as silly as it serious and which can tumble from slapstick in one scene to sublime communing with nature in the next and it all feels unforced and smooth. Credit to Chris Galleta here for some snappy one liners and bizarrely informative vignettes. I don’t think I’ve ever laughed at a teenager screaming the words ‘WE ASSUMED!’ before. I have now.

In terms of feel, I’d say ‘Kings’ most reminds me of ‘The Station Agent’ or ‘Garden State.’ It’s not transreal enough to echo Wes Anderson but it also has more out and out jokes. I feel bad because I haven’t time to write about every actor here but they were *all* superb. This film has no supporting actors, the ensemble cast create a skewed but believable world full of frustrated kids, weird cops and cringe-making acappellas. No filler here, not a second.

I won’t spoil the last scene but it was as real as the rest of the film. If this was a sappy, big Hollywood affair, we’d have the kids spouting Dawson-esque psychobabble and every plot line being nicely resolved. The strength of ‘Kings Of Summer’ is its bedding in mundane reality and its ability to depict the transcendence of that reality via friendship and nature.