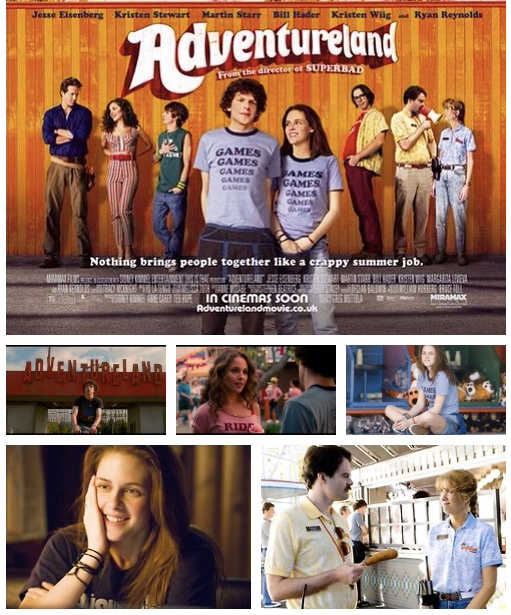 The credits are rolling on ‘Adventureland’ and I’m left happy, puzzled and slightly nostalgic.

I’m happy because it’s a deftly told love story that has enough adolescent awkwardness in it to be convincing. So many teen/early twentysomething love stories feature improbably reflexive, loquacious and confident central characters, seeing Eisenberg and Stewart’s sweet clumsiness is refreshing. Who isn’t awkward at that age? We may misremember ourselves as the cast of Skins, all pounding subculture and cool drugs but the truth is always stupider and, this is the crucial part, more boring.

That interstitial age is about having all of the dreams but none of the means. The theme park that is the backdrop for the film is the perfect metaphor for those years, of endless, penniless Sundays, having nowhere to go, nothing to do and cultivating a vivid hatred for every dull, smug brick of your hometown. ‘Adventureland’ captures that and weaves it into the inevitable boredom-avoidance activities: weed, terrible clubs, snogging in cars.

Kristin Stewart is uncannily, lambently beautiful in this film. Every frame she’s in, she fills with the gentle, easy glamour of a young Grace Kelly or Ingrid Bergman. In common with those actresses, she can bring both vulnerability and grit along with the looks and her character Em is nicely detailed. It made me very happy to see her spread her wings and fly in this role, she’s perfectly cast. I also love that the character isn’t a simple adolescent cliche: she’s not just geek-girl-slumming or beautiful-but-crazy or any other simplistic archetype. She’s complex, makes mistakes, loves, laughs, is an idiot and is also a genius. Y’know, like real people are. Again, kudos to Stewart for bringing all those qualities out without foghorning them, it’s adept acting.

Eisengberg’s James starts off as perhaps less complex than Em, we get a fairly broad future-writer-geek type. But in the course of the story, his character’s arc is also humanising. His job, initially a trial, seems to become a rite of passage that he accepts he might just need. The romance with Em, obviously the bigger rite, is transformative (as all first loves are) and it’s believable, sweet and realistic. I also like that there is a side romance here, this poleaxes any geek-loser pigeonholing his character could have faced. We are shown that even though he’s no Ryan Reynolds, girls find him cute so that informs the romance with Em.

Ryan Reynolds is great as Connell, he’s not cartoony douchey, we end up feeling sympathetic for him as much as we think he’s a bit of a knob. His character is a slight echo of McConaughey’s seminal (lol) Wooderson and the last shot of him is actually quite sad. Praise also for the rest of the cast, there’s not an off-key moment from any of them, whether it’s Hader and Wiig’s nice mentalness, Levieva’s nuanced disco diva or the totally rad Rush drum-solo. Dude.

So I’m happy. But I’m puzzled. I’m puzzled because I turned 21 in 1987 and so this film is essentially about my generation. And I didn’t really get a sense of that time from it. There were some nice soundtrack touches with Hüsker Dü, The Cure and even Animotion but… I dunno. I ended up wondering why it was set in ’87? Would have been nice to hear a bit of DM or REM or MBV. Maybe I’m being pernickety but the film transported me as a love story but not in time. Maybe they wanted to tell a love story devoid of texting, sexting, tweeting, vaguebooking and hyperemo Tumblr posts which I guess would be impossible with a contemporary setting?

So, the nostalgia for me came not from the period setting but the love story. It made me remember my first girlfriend, that sweet, terrible pain, the awkward, horrible doubt of wanting to say ‘I love you’ for the first time in your life. All of that, ‘Adventureland’ delivers flawlessly.