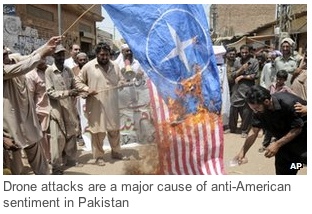 Fifteen people on their way to a wedding in Yemen were killed in an air strike after their party was mistaken for an al-Qaida convoy, local security officials said on Thursday.

The officials did not identify the plane in the strike in central al-Bayda province, but tribal and local media sources said that it was a drone.

Human Rights Watch said in a detailed report in August that US missile strikes, including armed drone attacks, have killed dozens of civilians in Yemen.
(Source: The Guardian)

This was a top headline for me today, more terrorism from the greatest threat to peace in the world today: the USA.

Obama’s terror drones killed these innocent people and what will America do about it?

Nor will the UK or UN or any other organisation. Because, basically, they’re all in America’s pocket.

Read this for more information.