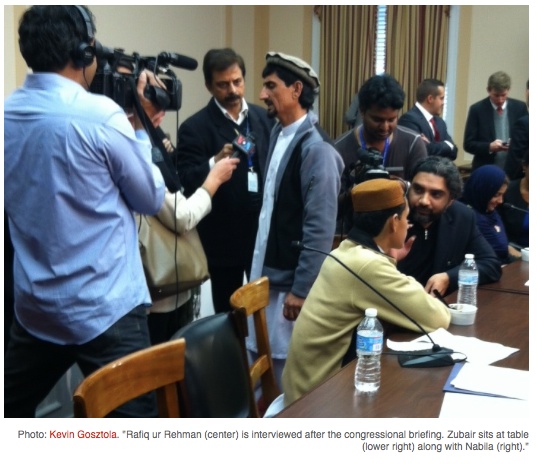 …Rafiq ur Rahman, a drone strike survivor from Pakistan, speaks at a congressional briefing in Washington, DC convened by Rep. Alan Grayson (FL-09). The primary school teacher spoke with his daughter Nabila (9) and son Zubair (13). One year ago, they were injured in the same drone strike that killed their 67-year-old grandmother, Rafiq’s mother, as she was tending crops in her garden.

Kevin Gosztola of Firedog lake attended the briefing, and writes: “It is heart-wrenching to hear a 13-year-old boy say, ‘Congressman Grayson, I no longer love blue skies. In fact, I now prefer gray skies. The drones do not fly when the skies are gray,’ because this is one of the few times he is not afraid he will be targeted by a drone.”
(Source: Boing Boing)

The US has now killed approximately 3,000 innocent civilians in its murderous campaign of terror.

When victims of their attacks tried to speak to Congress, to tell them what the attacks meant for them, only five representatives bothered to turn up.

This is the arrogance, the intransigence, the sheer, smiling evil of the US government. Their drones launch missiles at defenceless civilians while they bleat about Syria, Iran and North Korea.