Four years ago today
My life ended
And this one began

Soon, I won’t remember that life
Because I can’t
It’s too beautiful

Tonight, I’ll be wearing a mask
Over my mask
So people won’t ask me if I’m okay

But I know it’s waiting

These last four years,
Trapped in the Wrong Universe
I’ve been running, hiding

Yet the memories hunt me down
In dreams, in moments
I see you, I love you

I wait,
For nothing, for nobody,
Blank.

Last weekend, Matty and I attended Destination Star Trek London 2012 (DSTL). And it was a fucking blast. On the Friday, I got there before him and excitedly made my way into the Excel. I was a bit disappointed that my ticket didn’t get me into the opening ceremony, we’d just got standard tickets and it seemed like every little thing was an extra amount on that (already high!) price.

But I had so much else to look at: badges, cups, uniforms and all manner of Trek-related fabulous merchandise and, let’s be honest here, tat. When Matt did turn up, we had a rather uninspiring meal at the hotel before hitting the Klingon Ball. Which was… ok… It was basically a disco in an aircraft hanger. It didn’t really feel that Klingon at all. But, fuckit, we made the most of it and were pretty much the last people dancing. Saturday, we met up with the lovely Rebecca who I’d bumped into on that nascent social networking hub, Instagram. It was so cool to meet someone actually dressed up as a Klingon, she looked awesome. And, throughout the weekend, that’s what we kept returning to. Although we felt that a lot of things were overpriced and under-delivered, like a goody bag that basically consisted of some leaflets, we had such a good time because of the other fans. Just walking around the Excel, there was this feeling of tremendous friendliness and camaraderie. We were, by definition, a gathering of Trek obsessives. Here were people who would get my Darmok jokes, or know why I wanted to wager quatloos at every opportunity. It was a nexus of nerd, a glob of geek, the most awesome, beautiful people all being excellent to one another. On the Sunday day, Matt and I were lucky enough to hear this dude: That’s Richard Arnold and Trek flows through his veins. Hearing his first-hand recollections about Gene Roddenberry, the early years, the films and TNG was a beautiful moment. And, yes, I did cry! To think how much one little TV show has touched millions of peoples’ hearts is quite extraordinary.

When I got back home last Sunday night, I felt a huge sense of anti-climax. After the colours, the sounds, getting my picture taken with fucking Odo, Derby seemed terribly dull. But when I got into my car and all the lights lit up on the dash and the satnav started talking to me… I felt at home again. We can only invent the things we dream. Star Trek has inspired us to dream more grandly. Infinite diversity in infinite combinations. 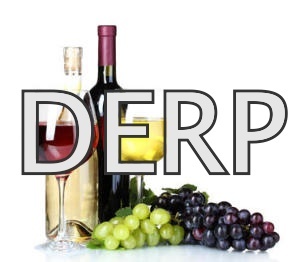 Drinking a couple of glasses of wine each day has generally been considered a good way to promote cardiovascular and brain health. But a new Rutgers University study indicates that there is a fine line between moderate and binge drinking — a risky behavior that can decrease the making of adult brain cells by as much as 40 percent.

So, forget all the bullshit about red wine, have grape juice and chocolate instead.

Or else, wonder why you just can’t seem to learn/remember anything a few years from now.

Oh, and I should add…