Nat and I caught the 9am train to London. We knew we had a lot to pack in but we had the freedom that the only timetabled event was the gig we were doing for the marvellous Hangover Lounge peeps on Sunday. After a lucky early check-in at the hotel, we headed to the London Dungeon experience. I was a bit worried about this as I heard it was gruesome. And it was but on the right side of traumatising. Loads of laughs and the actors all did sterling jobs marshalling us around the ghastly exhibits. The bit that was the most grim was the Whitechapel / Ripper bit, I would advise you to skip that bit as it features actual pictures of the victims. I found it hard going. The best bit was definitely the Drop: a ride that drops you straight down as if you’re being hanged. My experience was made bit more painful because you’re clamped into your seat by a metal bar which, for some reason, features a big chunk *exactly* where male genitalia ride. As the actress checked we were in, she thumped down on the bar and my balls were pummelled, Bond-style. Still worth it but if I go on again, I might have my knackers cut off first, save some agony. Then we went on to the London Aquarium Sealife Centre, just next to the London Eye. And wow – it was gorgeous. Fish, crustaceans, molluscs, the whole panoply of swimmy, creepy, crawly marine life was on show. Obviously, the sharks and turtles were the best critters… until we entered a frozen area and came face-to-face with some penguins! YEP! PENGUINS! They were such inquisitive little souls, coming up to the glass to inspect us before flashing off back underwater. I loved seeing them but it did make me think of the scene in ‘Happy Feet’ where he’s going barmy in the enclosure. We had a bit of time left over so we headed on to the British Museum. I really, really wanted to show Nat the Reading Room: the last time we tried in 2010, they said it was shut for refurb until 2012. So, we chanced it. Nope, still shut, probably till 2014. Awww, maaaan! Never mind, you can’t ever get bored at the British Museum, the fabulous artefacts it houses reach out and poke at you, forcing you to consider the epehmeral nature of your existence. I got a bit freaked out at some of the Greek carvings, tiny statues over 2,000 years old and yet looking like they were made yesterday. Who carved it? For what reason? How did they live, love and die? And will I leave behind anything that someone will be looking at in the year 4012? Unlikely.

For dinner, we went wandering in Soho. It’s one of my fave areas of London, I spent a lot of time there when I was in my early twenties and it feels like home in lots of ways. When I’m there, that’s when I’m most likely to wish I lived in London, the atmosphere is so amiable, particularly on warm, sunny evenings like Saturday. We found a good Indian restaurant, scoffed and then made our way to… THE PHOENIX THEATRE FOR BLOOD BROTHERS! Yep, this is probably what we’d both most been looking forward to. Willy Russell’s tale of separated twins is more than just a pondering on the old nature vs. nurture debate, it connects at a hugely emotional level. Some of my favourite bits where when the twins were young, the way the actors acted childhood innocence was flawless. Just the joy of being eight, where days are endless and all that matters is your mates and who can make the best machine gun noise. There were some heartbreaking moments, not just the end-point which we see at the beginning. I was very touched by the dissolving relationship between Mickey and his wife and how it’s mirrored by his estrangement from his blood brother. When he’s lonely and beaten down and doesn’t know where to turn, it really got to me and I admit I cried. And the songs! They dovetailed with the story perfectly, unlike some musicals where they seem wedged in as an afterthought. I was totally lost in the play, I kept forgetting I was watching live humans a few tens of feet away from me. It’s a testament to the power of the show that it almost made me forget how tiny the seat was that I was crammed in, I probably looked very peculiar to the people behind me as I was shuffling around, trying to massage the cramps out of my legs. Anyway, what a show! We were grinning as we headed back to Soho for some late lattes before heading back to the hotel.

Sunday, we got up bright and early and then hit Oxford Street. We didn’t do a marathon session as the gig was looming but it’s always fun being on that street for me, I love the bustle, the fashions, watching other shoppers. Surely Oxford Street is one of the best places in the world for people watching?

Finally, the actual reason we’d come to London: playing The Hangover Lounge at The Lexington. This, like all HL shows was totally acoustic, no mics or PA or anything. Which I love ~ there’s so much less faffing about than normal gigs. Before us were the wonderful Making Marks, a Norwegian foursome whose songs are catchy, pithy and bright as buttons. I was actually watching them thinking it was a bit unfair, me having to follow this amazing act. I did ask John HL if I could play before them but he politely refused me! 🙂 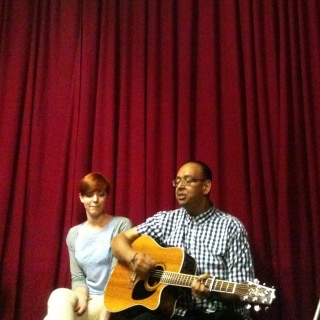 Then we played. It’s only the second gig Nat’s done with White Town (and second ever, also) and she sang wonderfully. I was a bit all over the shop because I wanted to do new songs. So, Nat had to hold up the lyrics for one newie, ‘I’m In Love With You,’ as I can’t even remember my own lyrics. I had an amazing time playing and the audience was so friendly and warm, singing along and putting up with my often incongruous inter-song banter. We had such fun that I really can’t wait to do it again. It’s an honour to play!

And one of the bestest parts of the gig was the surprise appearance of my friend Laura Mac! She’d got back from South Korea and wanted to keep it secret so she just turned up. She’s the star of this video, bless her. ? We’d asked John HL what sightseeing we should do and he recommended the cable car from the Excel Centre to the O2 Arena which neither of us even knew about. But it sounded great so we headed over. (Note: if you’re going to do this from central London, get a water taxi or a tube, not a cab like we did, you might save twenty-two quid.) Well, it was fabulous. We were lucky it was a gorgeous day and as we boarded our car and headed up, the views were stunning. It felt quite surreal to be dangling over the Thames, seeing the Excel retreat behind us and the O2 loom larger ahead. If you get the chance to go on it, take it.

Next was the Horrendous Fear part of the weekend. On the way over, we’d spotted a whirly tower spinny thing, one of these: I have a terrible fear of heights. It’s ridiculous and totally out-of-control. I don’t even like standing on step-ladders. So, when Nat started squeaking about the ride, my first instinct was to run off or perhaps feign an attack of beri-beri, anything to get out of going on this mad looking gizmo. But then I thought, fuck it. I was terrified out of my wits so that showed I needed to do it. We sat in the bucket seats and I was dismayed to learn the buckle wouldn’t do up between my legs because of my porkiness. The bloke operating it said I’d be fine with just the saftey belt. My immdeiate thought was that I would just slide out and why did they have the restraining bar and buckle if they were superfluous? The machine spun up, we rose into the air and then started spinning. I kept my eyes shut a lot, all I could hear was Nat whooping as she waved her arms in the air and took selfies on her iPhone. I didn’t take any pics as my hands were gripped like superglue around the chains (I had imprints after for a while). I was almost getting used to it when the wind picked up and started twisting the seat all over the place. It was at this precise moment I wished I hadn’t been such a fan of the Final Destination films. I very nearly pooped myself. After I’d stopped sobbing, we caught a water taxi back to Embankment. This was the final outing of the weekend and we couldn’t have picked a better coda. The sun was setting over the Thames as we sped along the river, the riverside sights of London laid out before us. It was beautiful to see the city skyline painted with the golds and oranges of the sun retiring for the day.

Then we grabbed our bags from the hotel and caught the train home. We got back to Derby around 22.15. We crammed a lot into 37 hours.

What a perfect weekend! 😀

(Click here to see the pics from the weekend!)