Firstly, a declaration of bias: I am an Apple fanboy. My home contains three Mac Pros (from G5 to 12-core Xeon), a Macbook Air, iPhone and iPad.

So, I think it’s fair to say that I’m not a Windows enthusiast setting out to bury Apple.

What I want to know is this – who the hell let iMessage / Messages out of the gate? This innovation in textual communication is surely going to cause more divorces and strangely sundered friendships than any other piece of recent tech.

Firstly, let’s look at iMessage. For a while now, two iPhones could message each other via the iMessage protocol if they were both on wi-fi or 3G. I never used it because a lot of the time I’m on neither. So, it just sat there, yet another un-used Apple innovation, like Siri or Facetime.

Then, with OSX Mountain Lion, Apple killed off the Chat app and replaced it with Messages. Now, you can iMessage from any Mac Pro or laptop. Fair enough, this is how they’re going now, trying to unify mobile and desktop apps. iCal becomes Calendar, Chat becomes Messages. But, hey, the protocol is still called iMessage. Ok? Got that? No, me neither.

Look at this pic: 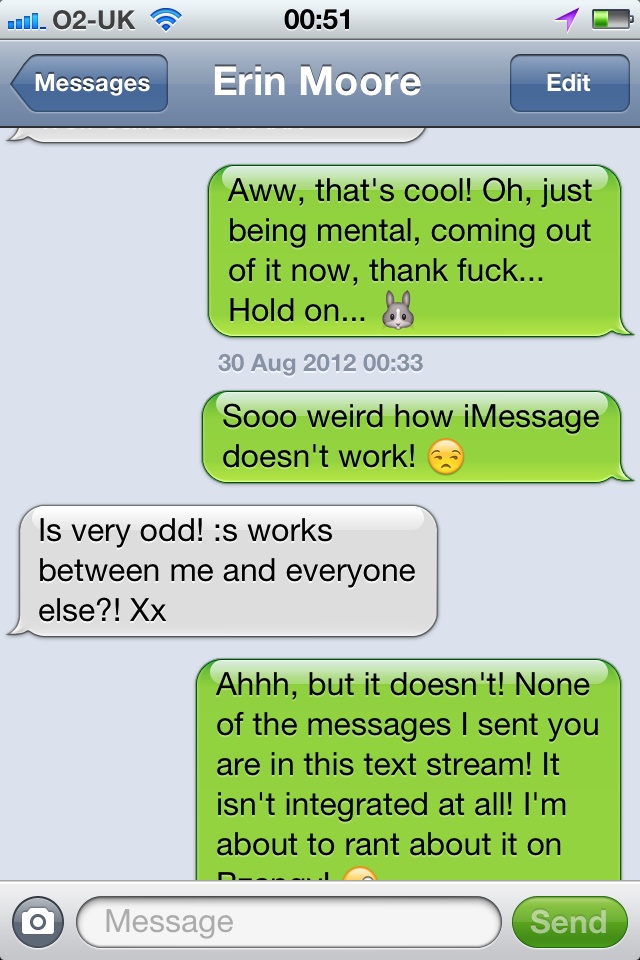 That’s the text stream of me chatting with my mate Erin. Notice how after the bunny emoji, there’s a gap and then the next text I sent is marked 00.33? Surely that means that Erin and I exchanged no messages between then?

Well no. Look at this pic: 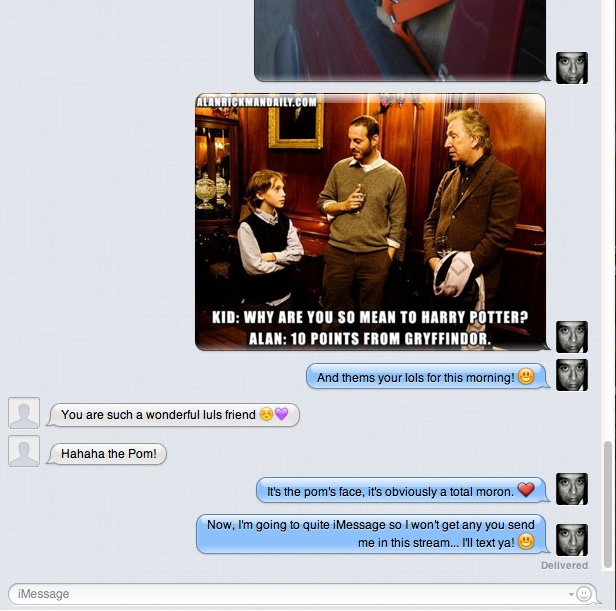 That’s a screengrab from the desktop app. In the intervening time, I sent Erin a load of lols and had a little chat with her, as you can see in the pic. Because I haven’t got iMessage enabled on my phone, I don’t see that conversation integrated into my phone texts.

Okay, well, surely if I enable iMessage on my phone, it checks to see if I’ve missed any and downloads them before integrating them in chronological order?

Just done that and my texts to Erin are sitting on my phone, not updated with the ones I sent from my Mac. I’ve just this second used iMessage on my phone to send her a pic, just to test it’s all working. And, hey, guess what ~ none of our normal texts or iMessage chat has appeared on the Mac. These words were never exchanged.

Imagine an email program that only updated the email conversations with messages it sent or received in that app on that platform, mobile or desktop. Imagine if you could never be totally sure you hadn’t missed a message from someone because either you or they didn’t have iMessage on (or off).

That’s the current state of play. In reality, the iMessage protocol is a deception. It acts like text and gets integrated by your iPhone into the normal text conversation but it’s not at all, it’s an entirely separate communication.

Earlier this month, I texted my friend Nat. I was concerned I hadn’t heard from her in a while, she hadn’t replied to a couple of texts and I wondered if something had upset her. It turns out, she had ~ she’d sent them via iMessage. They’d never arrived on my phone and since my Mac was off, I hadn’t got them there either.

I’m writing this rant as a warning and hopefully an explanation. Let’s go with the warning first:

iMessage is broken. It doesn’t integrate all messages that have been sent and it’s highly likely that you will lose messages at some stage, possibly wrecking a night of passion or at least causing unncessary arguments and stress.

The explanation is that two entirely different things are going on. Though the iMessage protocol hijacks the Messages app on Macs and iPhones, it is not SMS. It’s not even MMS, it’s a fat pipe that’s great at transmitting pics, vid etc.

I did wonder if this was just an issue I had, an over-reaction. But if you google it, you’ll find shit tons of people complaining about exactly the same issues I have above.

So, iMessage ~ fine for sending lols and that’s about it. Avoid it if the message you want to send is in any way important to you.