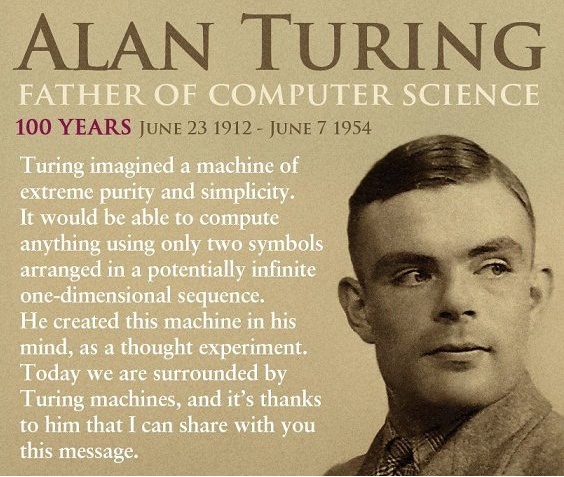 One of my all-time heroes. The man who invented computing, the concept of the universal machine you’re reading this on and one of the finest minds ever.

Without him, Britain wouldn’t have survived the German Atlantic blockades and we would very likely been invaded / lost the war.

He was gay and got persecuted by the police and state for it, maybe resulting in his suicide. Or perhaps he was killed by MI5 as a security risk, who knows? I love the fact that the Nazis were dealt a death-strike by a homosexual. Coupled with all the Jewish scientists that fled to work with the Allies, it’s poetic justice.

On top of his supreme geekery, he was also an Olympic-class athlete! Any time I start to feel a bit bigheaded, I think of Alan Mathison Turing and realise what an insignificant, rubbish human being I am in comparison.

Happy Birthday, Alan! Thanks for the computer! And thanks for helping us defeat fascism! <3 <3 <3