Around an hour ago, I put the kettle on after returning from a gigging trip to Greece.

Rich (my soundman) and I left for Greece last Friday. I can’t believe it’s not even been a week. We’ve packed in so much into the last five days. It feels like I’ve been away years.

Tonight, this minute, I feel completely energised and alive. The last five days have changed me, they have displaced ruts of behaviour with an impatient shove, replacing them with new experiences and new friendships. It’s 2.13am as I’m typing this but I’m still on Greek time so it’s actually 4.13am and, to be honest, I’m fucked. So… bear with me. 🙂 The major reason I went to Greece was to play two gigs. I was invited by Le Page to play with them and I was flattered that they asked me. Le Page is Antonis and Terpsichori, two lovely people I’d met at that strange attractor for lovely people, Indietracks Festival. The fact that I’d get to gig with them was a big part of why I accepted because I love their music.

They met us at Athens airport at 2am and we immediately started rambling on. And we never really stopped. Most nights, we just chatted till 4 or 5am. Saturday was sight-seeing time and we couldn’t have had better guides than Terps and Tony. We wandered around Athens which is currently this strange mix of ancient classical architecture, modern capitalist uniformity and layers of anti-government and anarchist graffiti. The juxtaposition of these elements is often jarring but always energising: this is a city that is obviously in turmoil, as is the rest of Greece due to the vagaries of capitalism and the uniform corruption of politicians. As we walked and coffeed and caked, Terps and Tony told us about the protests in Athens, the anger of ordinary citizens at the massive fuck-up their government is making of everything and how these same people were often caught up in repressive police violence. In Greece, the role of the police force in protecting capitalism and its state is nakedly, shamelessly obvious. On Sunday the 25th, I played at Tiki Bar, Athens with Le Page. The show went beautifully, the audience were friendly and funny, singing and clapping and dancing along to songs. And not just ‘Your Woman!’ People also came and had a natter afterwards (yaaay!). I love when that happens post-gig. That night, after the gig, we all went back to Terps’ apartment and we never actually stopped chatting at all, we talked through till when we had to catch the train. We were all just too wired and happy after the gig. We mostly dozed on the five hour train up to Thessaloniki. When we arrived, the difference between the two cities was palpable. Whereas Athens feels on the edge, alive and scrappily defiant, Thessaloniki seems more isolated from the current unrest. It also feels far more prosperous. I kept asking how you could compare the two cities: was it Glasgow versus London, Manchester versus London or Gothenburg versus Stockholm? The answer I got more than once was that it was more like Barcelona versus Madrid which I have to agree with.

That night, the 26th, we played at CooBar. Again, the gig went hugely well. The audience all seemed into both the bands, shouting and singing and I even had song requests from the very first White Town album, which kind of amazed me. Unfortunately, I tried to play a cover of Felt’s ‘Bitter End’ and I fucking murdered it. Lawrence, I apologise and hang my head in shame. 🙁 After the gig, we hung out in the bar and had competitions to see who could walk most convincingly like a boy (girls only) and vice versa. I now realise I simply cannot sashay, I just haven’t got the pelvis for it. Terps and her friend Chrysanthi looked so cute when they were trying to walk like tough blokes, I think my heart did pop a little bit. But as well as being silly, I had intense conversations about postmodernism, the nature of human intelligence (the old Penrose versus Turing again) and the best way our future AI overlords could wipe us human scum off the planet. Another perfect night mixing music, politics, singing and no-holds barred chats.

Tuesday, we trained it back to Athens. We’d booked a carriage and so we were free to play music (on my doody iPod amp) and talk shit. And, believe me, much music was exchanged and much shit discussed. Some surprise revelations about who enjoys fucking monkeys shocked and impressed us all. You would *never* suspect! That night, Terps, Tony, Rich and I spent hours wandering round Athens after a particularly tasty load of Goody burgers. We ended up sat in a park that was entirely constructed by the local community in ????????. Apparently, the land was earmarked for yet another car park (there are many car parks in Athens, sprouting up in the empty spaces left when buildings are demolished). Instead, the local people fought the authorities and made a park that is both useful and full of fun. Of course, the police regularly hassle people using the park. *sigh*

Back to the apartment and more chat. We covered transitions of meaning over time in language, the sociolinguistics of gender in Greece versus the UK, indiepop and, of course, love. Always love. Yesterday, we had a final lunch outing with Tony and Terps before we all headed to the airport. Even then, the time flew by because we continued to just talk and talk and talk over coffee and treats. So often, I feel like I’m boring people when I’m talking to them because, basically, I’m a massive geek and fascinated by pretty much everything. So I love to talk about Hugh Everett or Robert Mapplethorpe or the etymology of the word ‘quim.’ As I’m rambling, I’ll see the person I’m talking to begin to look bored and their attention wander. Inevitably, that will make me feel intensely lonely.

That feeling never happened once in the past few days. I ranted and raved, I had chats, discussions and out-and-out arguments. But through it all, the people I met engaged with me. As my music is basically me, I include the gigs in this: I felt a real sense of dialogue when I played. That is sadly rare. Today, I’m missing Tony, Terps and all the other lovely people that I met over there. I do love Derby but sometimes I feel so isolated here because that I can’t talk about what fascinates me. But, being more positive, 2012 is my year of pushing myself as hard as I can, of taking risks (which is why I went to Athens in the first place) and already it’s brought me this marvellous experience and people I would be proud to call my friends. If I’ve had such a fantastic time by taking a risk, this simply means I have to take more risks and be braver. After all, wonder is worth pursuing. The interactions I’ve had in the last few days, the things I’ve seen and the stories I’ve heard have made me re-consider so much of my life. I really am a different person now, I simply have to try and work out who that person is.

Thank you Terpsichore, thank you Antonis and thank you Greece!

A Foggy Day In Oakwood, a set on Flickr.

Some pics of recent lovely fogginess! 🙂 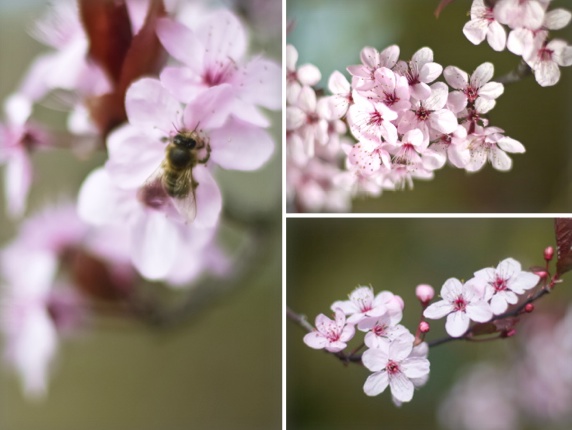 Every year, I take pics of the cherry blossom on the tree in my garden. It’s a marker of spring coming, of the year changing and also of how much I miss my ex.

At the same time of year, the daffodils she planted all come out to say hello. So, this time is always bittersweet. The flowers are innocent and happy, they’re just waving hello at me.

But I always feel slightly wistful and wish she was here to see the beauty she created. 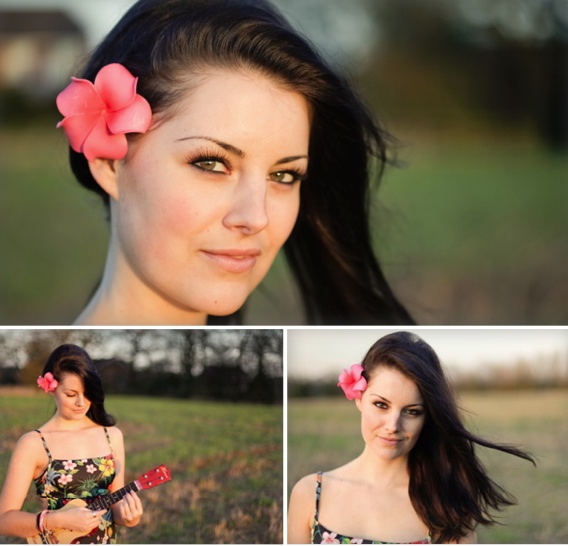 Not only is Toppy gorgeous, she’s also a great singer and plays a mean uke. Which, I found out, is both a treasured memento from her trip to Hawaii and also something of a totem for her obsession with the 50th state.

Soo… Derby isn’t really a dead ringer for that sunny wonderland but we did our best, catching the last, golden rays of the sun. Click the pic to see more! 😀 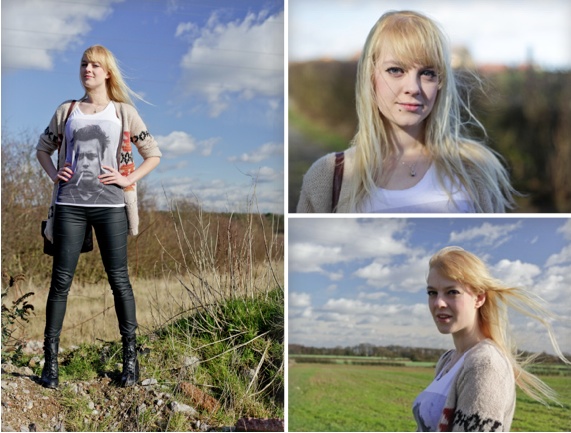 Finally managed to get some daytime, sunny pics of Gemma and I think she looks fabulous. I think the pics capture both her serious side and her cheeky scamp nature too. 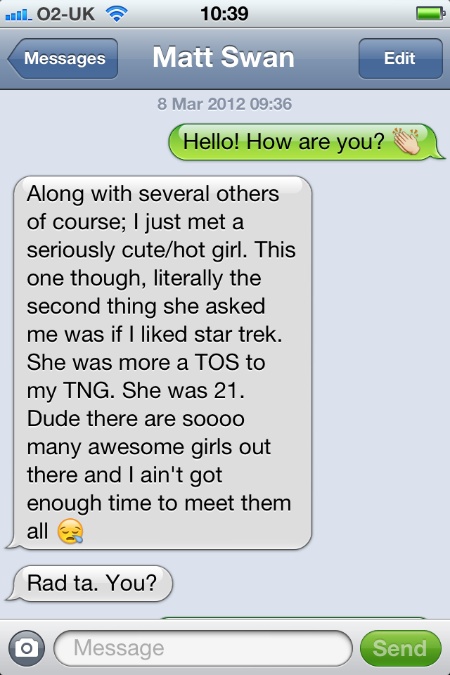 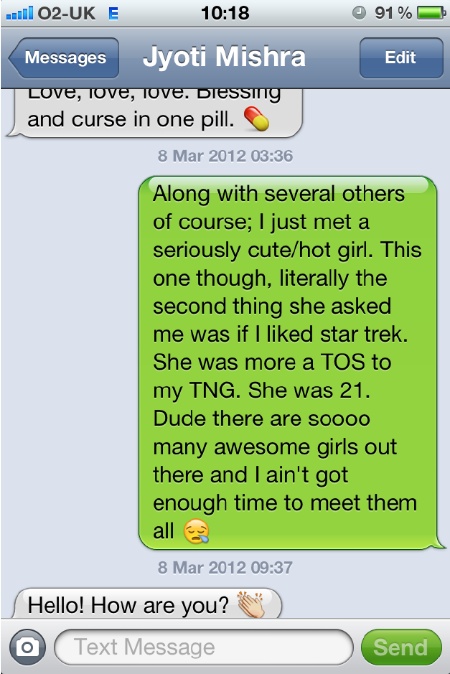 I miss you.
It’s simple and horrible.
A ghost, keening outside my door,
Disturbing everything I do.
It won’t shut up.

I miss you.
My house is full of you because
It’s your house now.
I keep wondering when you’ll come home
And I can make you a cuppa
And we can have a dull, wonderful evening
Watching the telly,
Like we used to.

I miss you.
It’s been years since I last held you
And every second of that time is an assault,
A knife sliding under my skin,
Separating me from this world,
Cut by cut.
When people say, “It’ll get easier.”
They’re lying.