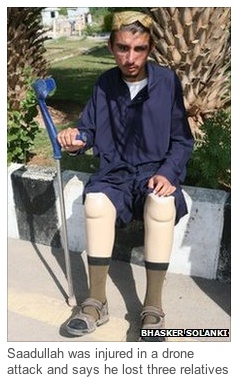 When tribal elders from the remote Pakistani region of North Waziristan travelled to Islamabad last week to protest against CIA drone strikes, a teenager called Tariq Khan was among them.

A BBC team caught him on camera, sitting near the front of a tribal assembly, or jirga, listening carefully.

Four days later he was dead – killed by one of the drones he was protesting against.

His family told us two missiles hit the 16-year-old on Monday near Miranshah, the main town in North Waziristan. His 12-year-old cousin Wahid was killed alongside him.
(Source: BBC News)

I have tried to post an article on here every time the US has carried out another terrorist attack on innocent Pakistanis. I have tried but, I confess, some days I’m just not up to writing about more children killed by CIA drones, more families shattered by the USA’s brutality. The horror is too much.

Here are the current figures for the illegal drone war the USA is carrying out in Pakistan: 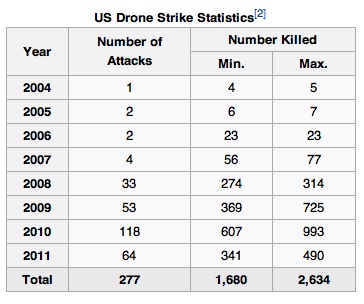 Let’s be perfectly clear here: the USA is not in a state of war with Pakistan. So, these attacks are terror attacks, pure and simple. And even if there was a state of war, the use of drones can be seen to be flouting so many of the Geneva Conventions set up precisely to protect non-combatants, as Clive Stafford-Smith points out:

“If you are trying to surrender and you put your hands up to a drone, what happens?” he asks.

“They just fire the missile, so there are all sorts of Geneva Conventions issues which are not being discussed.”
(Source: BBC News)

Stafford-Smith is a lawyer campaigning against the CIA’s terror in Pakistan. In a Guardian article in August, he reported a study by the Bureau of Investigative Journalism:

The BIJ’s study is everything that the CIA version of events is not: transparent, drawn from as many credible sources as possible and essentially open. It is clear about where its material comes from and what the margin of error may be. You should look, and you should engage, not just with the bare numbers, but also some of the stories: the attack on would-be rescuers by drones that had lingered, circling over the site of a previous strike, and opened fire – on the cruel assumption that any Good Samaritan must be a Taliban Samaritan; or the teenager who lost both legs when his family home was hit.
(Source: The Guardian)

How is this tolerated by the other “civilised” nations of the world? Why is the USA, alone among every nation, allowed carte blanche to murder over 2,600 people with its drone attacks?

I find the conspiracy of silence in our mass media to be mindboggling. This is the same media which descended into a feral frenzy over Ghaddafi’s death, scrambling to post up pictures of his corpse. And yet, it manages to miss displaying over 2,600 pictures of other corpses, these ones being the victims of American imperialism.

The CIA and USA’s justification for these attacks is laughable. Every attack is on a “militant.” But of course it is. This is a retroactive designation: anyone the US murders with its drones automatically becomes a militant. Including the children blown to tiny pieces, presumably.

Again, imagine if China started using drones against civilians in South Korea, saying that they had evidence that they were part of an anti-Chinese terror group. Could you really see the world standing by doing nothing in that situation?

One thing is clear. Obama = Blair. Both were seen as lions of the left, both are now nothing more than blood-encrusted war criminals. The blood of the innocents of Pakistan (and now Somalia) drips from Obama’s hands.

And the voices of protest will fall on deaf ears:

But Washington is unlikely to heed the anger here. Under President Barack Obama, the use of drone missiles has soared – there’s an attack on average every four days.

A drone attack every four days under Obama. What a glorious leader!