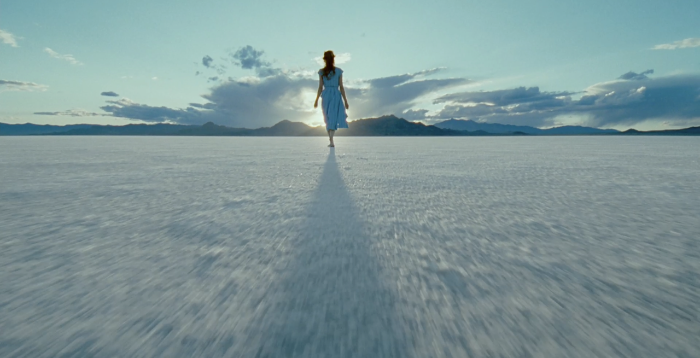 So, after the high-octane spectacle of ‘Super 8,’ I headed to see Terence Malick’s ‘The Tree of Life’ at Derby Quad yesterday. My companion was fellow film buff Nat. I’d heard that the film was very divisive, prompting walk-outs from the audience so I wanted to go with someone I knew loved cinema and would give it a fair chance.

The plot, such as it is, concerns a family growing up in Texas in the 1950s. Dad (Brad Pitt) and Mom (Jessica Chastain) have three boys. The eldest (Jack) is played as a kid by Hunter McCracken and as an adult by Sean Penn. The film keeps skipping backwards and forwards through time. We see the kids born, we see them as children and we see Jack as both a kid and the be-suited Penn, loping around modern-day skyscrapers and looking angsty. The main narrative point is that one of the boys dies at age 19. How, we’re never told (Vietnam? Car crash?). We see the mother and father’s anguish and hear the mother, calling to God to explain her loss 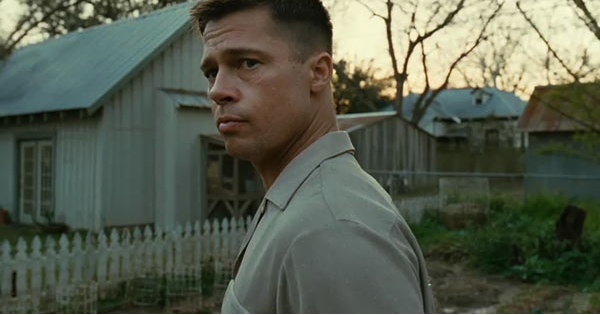 These family moments are amazingly told by Malick. This is the only film I’ve ever seen that seems to match how I think: time skips from now to then to now, memory upon memory being triggered by the vaguest of associations. The cinematography is stunning, there’s an almost surreal quality to how close we are to this family, these kids. Malick captures so many moments that define and describe the characters without the use of dialogue. This film at its best is a visual poem, daring and bold in its avoidance of all the conventional cinematic narrative and expositionary tricks.

And then there’s the twenty minutes concerning the birth of the universe, solar system, Earth and life on Earth (including dinosaurs). Every shot is as loving and detailed as Malick’s familial observations and the effect is to push us as an audience towards marvel, wonder at the cosmic splendour. However, there are also huge religious tones to this sequence and the film as a whole. The film starts with a quote from the Bible and throughout we hear characters’ voices imploring God to provide them with some meaning, some explanation for everything they are suffering. 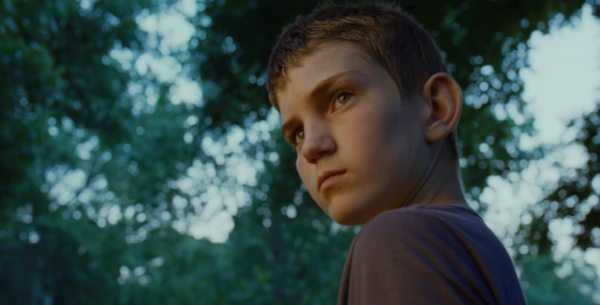 This is what most jarred with me and disconnected me from the film. As a lifelong atheist, what Malick presumably intended to be spiritual and revelatory I instead found annoying, cloying and infuriating. The whole end heaven (?) sequence where everyone arrives on a beach was the most odious part. Characters meet each other, out of time and hug. Really? This is heaven, meeting yourself on a beach? I found it almost offensively theistic, particularly the part where the mother, framed by two beautiful women we’ve never seen before (angels??) intones how she willingly gives up her son. Why? What kind of god would put you through having and raising a son to kill them at 19 to prove some kind of point about morality or freedom of choice? Answer: no god I would wish to follow or believe in.

I noticed something very bizarre as I was watching ‘The Tree of Life.’

Woody Allen’s 1980 classic ‘Stardust Memories’ is about a comic who believes comedy is beneath him. So, he wants to make important, big, philosophical films. We see clips from these films. And, blow me, if there aren’t similarities to ‘The Tree of Life.’ Near the end of ‘Stardust Memories,’ we see a clip of the cosmic film and it’s shots of volcanoes erupting, clouds scudding, waves crashing… exactly the same as Malick’s nature bit.

There’s also a scene where characters arrive from a train at a garbage dump, presumably the afterlife. They walk around aimlessly as seagulls wheel overhead, cawing wildly. Scratch the train and the garbage dump and that’s the end of ‘The Tree of Life.’

Whereas Allen was poking fun at himself and at wilfully ‘arthouse’ directors, Malick is, presumably, being stone-cold serious. So, what does it mean that his idea of cosmic wonder was parodied 31 years ago by Allen? There’s a reason that tropes become toothless and ripe for humour.

As beautifully shot, acted and directed as ‘The Tree of Life’ is, I believe it is a film hobbled by its own pretentiousness. It is trying way too hard to be profound and therefore often drifts into unintended comedy or, even worse, dullness. I confess, I couldn’t wait for it to end, the end heaven beach scene dragged on forever (eternity? 🙂 ). Checking online, it appears that Malick wants to make a six hour version!

But I don’t hate the film. Nat and I talked about it, comparing experiences. We both baulked at the religiosity, both loved the baby / toddler bits. And we were both unsettled by the film, it did affect us. She was also waiting for it to end so I don’t think she’ll be investing in the six hour cut. Then again, we did well compared to the eight or so people who actually just walked out of Quad. I think that’s the most people I’ve ever seen walk out of a screening anywhere!

It’s a shame and I do feel those early-leavers missed out as there is a beautiful family story here that is movingly told. If I could pick a version, I’d pick one without all the Christian baggage and with a less dour view of creation. After all the universe, whether it’s the birth of galaxies or the wiggling of a tiny baby’s toes is wonderful, is startling, is a miracle. Why ruin it by sticking God in there?

Or maybe Allen’s Alvy Singer was taught the most powerful lesson years ago in ‘Stardust Memories.’ When asking god/aliens about the meaning of life, how can he make things better, what about war, poverty etc., the aliens/god reply, “You’re a comedian ~ you want to make the world a better place? TELL FUNNIER JOKES!”

Last night, Malcy and I went to see ‘Captain America’ at the Derby Showcase Deluxe but it turned out to be in The Director’s Lounge. Not wishing to pay a million billion trillion quid for film tickets, we opted for ‘Super 8’ instead.

I’d known about the film from trailers, it looked cute: kids running about shooting zombie films when *blammo* something strange starts happening. I was intrigued but it wasn’t top of my list to see.

Just shows how wrong one can be. And also how trailers sometimes totally undersell a film.

From the beginning to the end of ‘Super 8’ I was hooked. When I wasn’t hiding behind my hands at the scary bits, I was grinning like a loon or sighing at the memories of my first love this film provoked.

I’ve seen all the blockbusters this summer: ‘X-Men: First Class,’ ‘Transformers 3,’ ‘Green Lantern,’ ‘Harry Potter DH2,’ and I think I can honestly say this has been the most disappointing year for cineplex films in a good while. From the merely meh like HP and ‘X-Men’ to the turbid, squat cankers of ‘Transformers’ and ‘Green Lantern,’ 2011 hasn’t delivered on the popcorn film front.

Then, with one fell swoop, ‘Super 8’ saved the day and my cinematic summer!

I’m not going to do any spoilers in this review because one of the reasons I loved the film so is that I really didn’t know what to expect. What was the strangeness? Was it aliens? Zombies? Escaped killer army robot? So, please, do yourself a favour and go in similarly un-prepared and the film will reward you so much more.

What I can tell you is that the film is set in 1979 and that the lead character, Joe Lamb (Joel Courtney) is 13. (Which is spooky because that’s how old I was in ’79. This immediately brought a huge set of added resonances for me. Also, if they got anything wrong about that time, I’d stick out for me by a mile. It was all faultless.)

Aaanyway, Joe and his group of mates are shooting zombie films on super 8mm cameras when there’s a huge explosion on a train track next to where they’re filming. After that, things in town start drifting into weirdville: animals run off, people disappear. And what the hell is up with the Air Force, snooping around?

So, a great, hooky premise. But the film would have died if the actors cast as the kids had, in any way, been unconvincing. Thankfully, not only are they convincing, they are magnificent. Under J.J. Abram’s deft, Spielbergesque (well, he is the producer) direction, the kids deliver the best performances I’ve seen so far this year. Not just compared to other kids, compared to adult actors.

The blossoming attraction Alice Dainard feels for Joe could have been syrupy dreck but Elle Fanning, who plays her, made it sweet and believable. And there’s no room to hide in this pic behind a CGI mask or a massive robot, Abrams is in there, SUPERCLOSEUP, on these kids’ faces all the time.

Abrams manages to pull off the same trick that Spielberg mastered in E.T.: we see the film from the kids’ perspective in that he makes us kids again. From family mealtime warzone to skeezy older guys perving on sisters, we’re with them, we are them. The corollary of this is that the adult world is seen through that prism, all distant parents and blundering, grown-up stupidity. Abrams’ lightness of direction never lets that veer into emotionally unrealistic Famous Five territory, the narrative lets the kids remain centre-stage in a very un-staged way.

Woah – and the ending! I don’t think it’s giving too much to say that the ending piles spectacle upon spectacle but, unlike ‘Green Lantern’ and the other braindead 2011 blockbusters, the mayhem is grounded in the reaction of the kids. So, and I hope you’re listening, Michael Bay, IT MEANS SOMETHING! I really didn’t give a toss about Shia and the Fox replacement, I did care about these kids, my heart was jumping into my throat. I was cheering them on, I felt part of their gang.

That’s all I can really say about ‘Super 8’ without getting into super spoilers. I only saw it by accident but what a lucky night that was for me. I know as soon as it’s out on Blu-ray, I’ll be buying it because this is a film I’ll watch again and again. I’d put it up there with ‘Stand By Me,’ ‘Explorers’ or ‘Monsters’ in terms of how it connected to me.

Thank you, ‘Super 8’ team for making such a beautiful film! 🙂