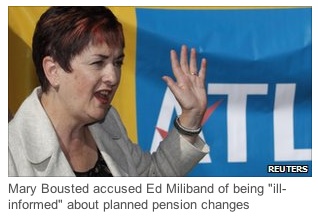 The head of one of the unions striking over pensions has said Ed Miliband "should be ashamed of himself" for urging workers to call off the action.

Mary Bousted, leader of the Association of Teachers and Lecturers, told a rally in London his stance was "a disgrace".

The Labour leader said the strikes were "wrong" because negotiations with the government were still ongoing.

The capitalists have the Tory party who dutifully represent the interests of their megarich buddies. Would it be too much to ask for a Labour party that actually represented labour?

In short, Miliband, fuck off to the Tories, you dick.