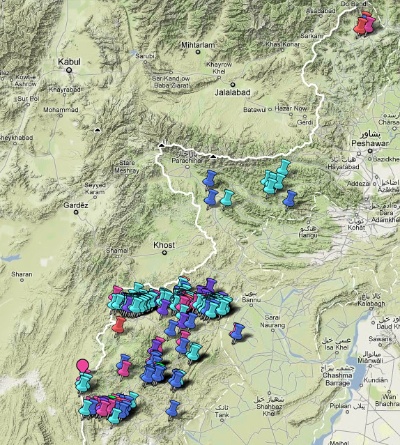 At least three suspected militants have been killed in a drone strike in the troubled Pakistani tribal region of North Waziristan, officials say.

The US does not routinely confirm that it has launched drone operations, but analysts say only American forces have the capacity to deploy such aircraft in the region.
(Source: BBC News)

Another day, another terrorist attack by the USA on innocent Pakistanis. Or, right, sorry – “suspected militants.” That’s alright, then. As long as they were “suspected,” it’s fine to launch missiles at them. The USA is at war with Pakistan, after all. Oh, hold on.

This is another brutal murder of innocents by the USA. You won’t see it on your TV news. You’ll probably get some footage of Obama saying how nasty North Korea / China / insert-nation-here are. But look at what the US has been doing since 2004: 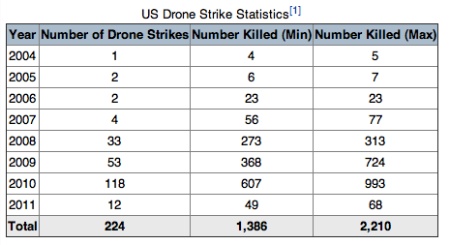 The USA has murdered somewhere between 1,400 and 2,200 Pakistanis in the last seven years. How many foreign nationals has NK or China killed in that period?

If you’re looking for the number-one rogue state, the top sponsor of international terrorism, you have to give that accolade to the USA. 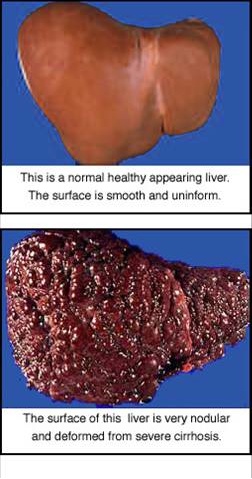 Don Shenker, chief executive of Alcohol Concern, said: “It’s all carrot and no stick for the drinks industry and supermarkets.

“By allowing the drinks industry to propose such half-hearted pledges on alcohol with no teeth, this government has clearly shown that, when it comes to public health, its first priority is to side with big business and protect private profit.”
(Source: BBC News)

So, that quote, which sounds like it could come from Lenin or Trotsky, actually comes from Alcohol Concern. They’re not known for being rabid Commies.

Today, AC and five other health groups (the British Association for the Study of the Liver, the British Liver Trust, the British Medical Association, the Institute of Alcohol Studies and the Royal College of Physicians) refused to rubber stamp the government’s feeble pretense of combatting alcohol abuse.

Being a straight edge Commie, this news item is welcome but unsurprising. The role of capitalist governments is first and foremost to protect the capitalist system and this of course includes big players like the alcohol and nicotine pushers. At the same time as government issues slogans about how evil and bad drugs are for “the kids,” it protects its friends who happen to be peddling the two most damaging killer drugs.

If you want facts and figures on that, have a look: 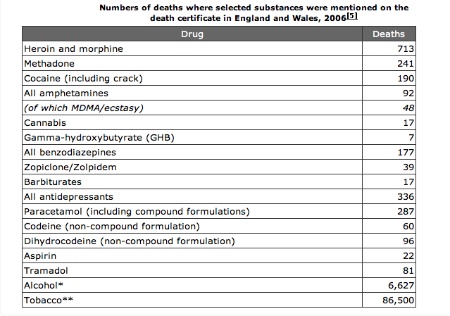 So Ecstasy, the favourite horror drug for the Daily Fail and moronic Tories in general killed 48 people. Whereas alcohol killed 6,627 people in the same period. That’s 138 times as many people. And yet, from tabloid headlines and the frothing of our politicians, you would think Ecstasy is the demon drug, not alcohol. Tobacco killed 86,500 people, 1,802 times as many people as Ecstasy.

But our government wastes money on criminalising and policing these peripheral, unimportant illegal drugs while the real killers, the ones tearing our society apart are ring-fenced and protected. Every now and then, they’ll wheel out some bullshit “initiative” like the one in this news report that the health organisations are boycotting but that’s as far as it goes.

After all, can’t hurt our friends in big business, can we?

What do you call a really successful pusher?