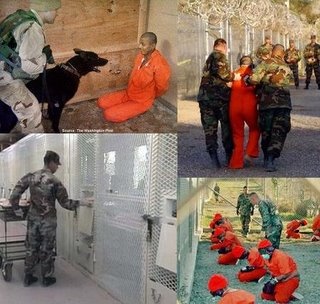 The United States government has called on China to stop what it calls the “extralegal” abductions and detentions of lawyers and human rights activists.

See that picture at the top? That’s what happens to people who disagree with the American Empire. They get kidnapped and imprisoned without trial.

You should probably read this post about Guantanamo if you haven’t already.

Yep, the USA is currently the biggest rogue state in the world. It’s killing innocent Pakistanis every week with its illegal drone attacks, it invaded a non-agressor country, killing over 1.2 million people in the process and it still maintains its torture camp at Guantanamo. Filled with innocent people its kidnapped internationally via its CIA black ops and network of complicit states, no charges, no trial. Kidnapped internationally, mind – the Chinese are beginners, they’re only kidnapping and torturing their own citizens.

Obama – all that hot air, all that feel-good bullshit and the man is simply carrying out the same cold-blooded murders, kidnapping and torture that his predecessor did. Hell, he even promotes the torturers and approves of life imprisonment of innocent people!

“With the stroke of a pen, President Obama extinguished any lingering hope that his administration would return the United States to the rule of law by referring detainee cases from Guantanamo Bay to federal courts rather than the widely discredited military commissions.
(Source: Amnesty International)

So, when the USA starts bleating about the Chinese violating human rights, this is the definition of crocodile tears.