Click to see some iPhone snaps I took the other week. 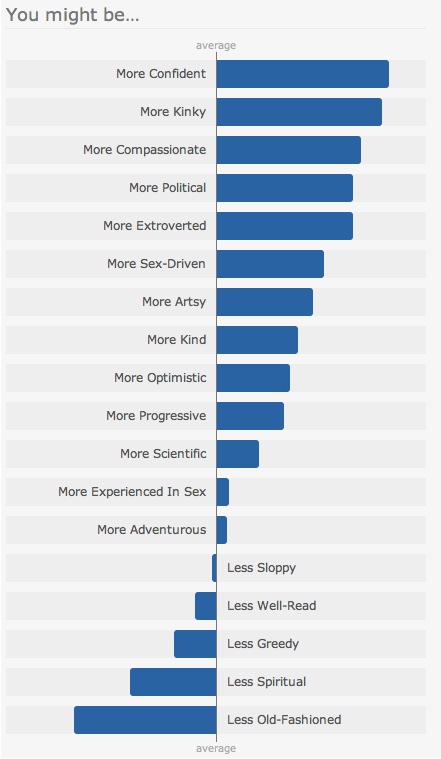 Apparently, this is how I compare to the average straight bloke of my age (who’s an OK Cupid user). 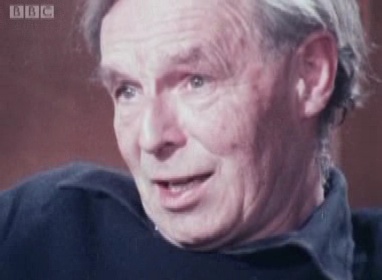 Tonight, I watched a wonderful documentary about the British sculptor Reg Butler. It was made in 1974 and it’s pure old-school BBC arts doc: no moving cameras, no tricksy cutaways or CGI, just talking heads. Talking about art and life and sculpture. Click here to watch it. 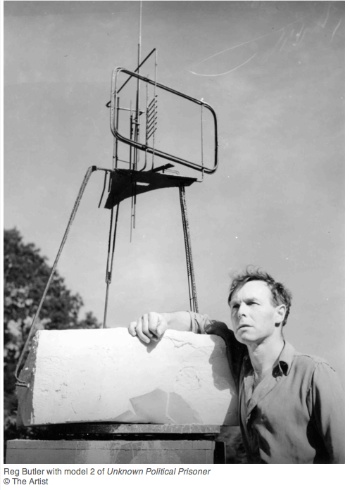 The doc traced Butler’s career from his early breakthrough piece ‘Monument To The Unknown Political Prisoner’ up to the (then) new works: figurative bronzes of women (though Butler calls them girls) painted in lifelike tones. The Tate now owns ‘Girl On A Round Base‘ and it’s still a startling work which makes me question my own sexuality, my objectification of women as sexual objects and, naturally, mortality. 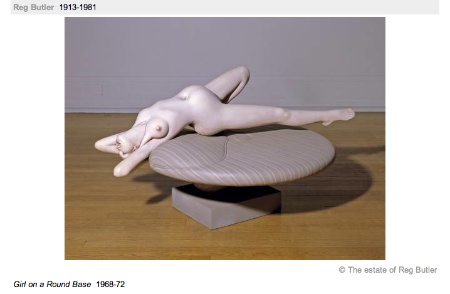 Such overtly sexual and sexualised sculpture is bound to poke at bourgeois morality and the interviewer did ask some rather strange question (as this article points out). Butler fielded this banal line of questioning with aplomb: he laid himself bare and admitted that his obsession with ‘girls’ was partly lust, partly compassion. the most telling part is that he emphasised the gradation of care. I can’t remember exactly but he says something like “If you can look at a girl and see her, have some compassion for her, imagine her growing old, imagine her dying, that’s the point.”

So, yes, of course his sculptures were about lust but they’re also obviously about death. And he freely admits his obsession with girls.

Can you see why I like this artist who died thirty years ago?

I would say 99% of my songs are about women and girls I’ve known. Unlike Butler, the females I’m writing about aren’t an abstraction, a Platonic ideal of ‘girlness’ I review in my head. And women, girls, love, lust, sex, death are the themes I return to again and again and again. I’ve tried writing scathing political diatribes: they’re shit. I’ve tried writing pretty stories where everything works out, no loose ends, poignant closure, the songwriter’s version of THE GREAT NOVEL. I can’t do it. I’m a broken record, a rusty, squealing hinge, a dripping tap, the painful hardon you get on the bus that makes you miss your stop.

I’m confused and marooned and, as a middle-aged man, while the things that were trials as a teenager are trivial to me now, they’ve been outpaced by new terrors. Love shatters and pierces ones body and soul with such beautiful shrapnel. I pick out the slivers and scratch bloody dots across staves, redundant fucking doodling. In my dream
You’d come to visit
I don’t know why
There was no reason: it was a dream.
You kept seeing things in me
That I deny
That I lose
That I gave away to a car boot sale years ago, I thought.
Beautiful, you saw them
And detailed my failure
Each speck of dust
A galaxy of disappointment
Unworthy of you.
I’ve tried so hard to keep our dream house clean
But you found the dirt
Bin bags appeared that I know weren’t there
Bile sweated from worktops I know were clean.
In a forgotten medicine tub
Some grass had germinated and sprouted
This disgusted you more than anything
I held the tiny stems in my hands:
“Look! Look how pretty they are!”
I wanted you to see:
Their green sheen, bursting with hope
Their infant eyes seeking lovelight
But the girl you used to be
Who treasured every living thing
Who brought me nature in her careful hands
Who made it live and laugh and love
Was gone
Is gone.
Dreams, eh? Funny, aren’t they?
And you know the funniest thing?
My nightmare starts when I wake up. 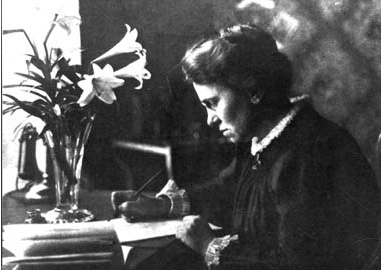 At the dances I was one of the most untiring and gayest. One evening a cousin of Sasha, a young boy, took me aside. With a grave face, as if he were about to announce the death of a dear comrade, he whispered to me that it did not behoove an agitator to dance. Certainly not with such reckless abandon, anyway. It was undignified for one who was on the way to become a force in the anarchist movement. My frivolity would only hurt the Cause.

I grew furious at the impudent interference of the boy. I told him to mind his own business. I was tired of having the Cause constantly thrown into my face. I did not believe that a Cause which stood for a beautiful ideal, for anarchism, for release and freedom from convention and prejudice, should demand the denial of life and joy.

I insisted that our Cause could not expect me to become a nun and that the movement would not be turned into a cloister. If it meant that, I did not want it. “I want freedom, the right to self-expression, everybody’s right to beautiful, radiant things.” Anarchism meant that to me, and I would live it in spite of the whole world — prisons, persecution, everything. Yes, even in spite of the condemnation of my own closest comrades I would live my beautiful ideal. Getting addicted to doing portraits at night! Click the pic for more Matty! 🙂