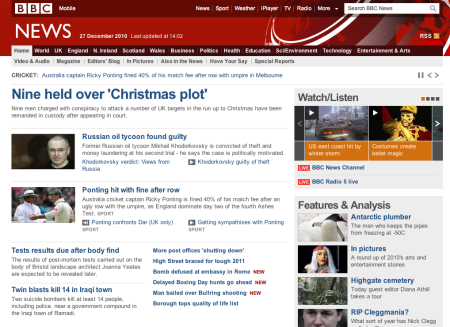 Above is a screengrab from the BBC News website. Notice no mention of the fact that the USA murdered 18 Pakistanis in a terrorist drone attack: 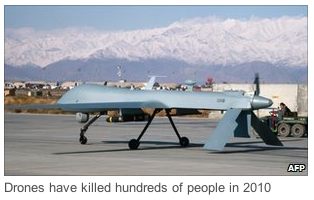 Missiles fired by a suspected US drone have struck a vehicle in north-west Pakistan killing at least 18 militants, officials say.

US drone attacks are fairly regular in North and South Waziristan which are Taliban and al-Qaeda strongholds.

More than 100 such attacks occurred in 2010, most of them in North Waziristan.
(Source: BBC News)

So, yesterday, Obama condemned the terrorist bombing which killed 30+ Pakistanis.

Yesterday, that terror attack was on the front page of the BBC News website. Today – nothing. Oh, the article is there, if you dig for it as I do. Hidden away where the casual visitor won’t see it.

Think of those numbers: the USA has carried out over one hundred of these terror attacks in 2010 alone, killing hundreds upon hundreds of innocents and presumably maiming far more.

Yet, all we hear about is the evil Taliban and their relatively paltry body count.

How is it that some murders of innocents are terrible crimes and some are not even worth mentioning?