While I was on the phone to Kaypea, I spotted these little fellers in my garden. She demanded pics, click to see them! 🙂

entoloma? meshableh, apparently that’s a massive genus. i only have hundreds of mushroom species to run through!
oh no wait i vote marasmius oreades!!!! fairy mushrooms 😀
next time snap its belly open and take a picture :D. perhaps not quite as naturalistic, but, mutilation for scientific purposes is always fun, er, right?
thanks for taking the photos and uploading them for me jyoti :). Last Monday, I saw these clouds. A friend texted, wondering if it was the end of the world. I have my lovely friend Kaypea staying at the moment and we’re having varied discussions ranging from travelling between universes to rollerblading or skating downhill.

On Sunday, I got to play a strangely wonderful gig. I played a totally acoustic gig at The Hangover Lounge and… it was soo special in so many ways.

Firstly, I got to play on the same bill as Elizabeth Morris (allo darlin’) and Amor de Dias, both of whom were absolutely fantastic. I hadn’t heard any Amor de Dios before but I’m going to search their stuff out now, very flowing and… surreal is the only other word I can think of? They were last on and it was a great way to finish off the day.

I went on first and looked out at a room of expectant faces. It’s quite a big room, too, so I was worried about projecting. But it was liberating! No worrying about mic or sound or pedals or backing tracks. It was just me and my guitar, singing my heart out. I loved it. And the audience all kept soo quiet, they made the gig work.

The highpoint of my set for me was when Elizabeth joined me for ‘Your Woman’ so all I did was play guitar while she sang it. That won’t ever happen again and I love those kind of unique moments. It’s why I make music, to meet people like her and have lovely collisions like those.

Then I got to see her play. I was sat in between my friends Vanessa and Nat and, I have to admit, she did make me cry at least twice. I blinked the tears back but it was difficult to keep it in, particularly after playing myself. When Elizabeth performs, she’s just there, I can’t really explain what I mean. She was sitting about two feet in front of me, singing these songs she’s written that I love, full of love and lust, despair and insecurity. Perfect.

It was a wonderful day. Days like those make me feel so lucky and happy to be a musician!

Only a teeny-weeny playlist, this one as it was just in between bands playing: Last weekend, I was lucky enough to DJ (twice) in London and also do a gig at the Hangover Lounge. I went down with my ace mate, Nat and we managed to get some sightseeing crammed in too! Even better, later on we got to meet up with Vanessa and Kaypea and then we all ended up dancing at HDIF before going back to the hotel for a deranged late-night chat. Really, what better way to spend a weekend than singing, dancing and talking shit with such amazing people?

That weekend is going to be hard to beat! 🙂 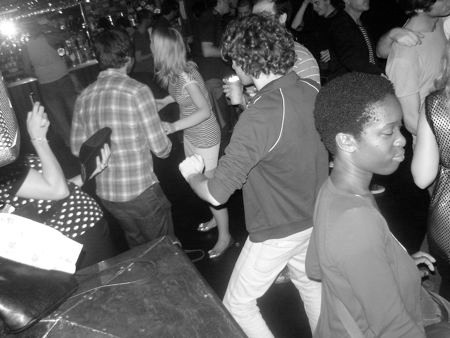 Thanks again to Ian HDIF for inviting me to DJ at his lovely, lovely club night. I had a blast and it was nice to slip in a bit of Nas and Set Your Goals in amongst the indiepopness! 🙂 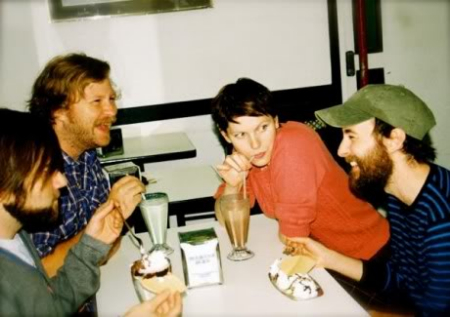 Umm… how can I say this? I deleted the playlist before saving it when I was DJing at HDIF this weekend… 🙁

Ah well, I’m sure the world can miss one of my playlists in a fortnight without crumbling. What I can tell you is this: the top new song I played tonight was ‘Silver Dollars’ by allo darlin.’ Just a beautiful pop song from one of my fave current songwriters. It’s taken from the debut album and I recommend you go and buy it now. Don’t even listen, just buy it! Woah. On the 4th of August, Robbie and I travelled over to Sweden to do a bit of travelling but, most importantly, play the Cosy Den 2010 festival, a multi-day extravaganza of amazing music.

We also travelled to Gothenburg as we both missed it. And, boy, do I miss it more now. It’s such a beautiful city. I’m not knocking Stockholm but Geeburg will always have a bit of my heart.

On Sunday the 8th, I played at Cosy Den. It was a strange gig, I was very on edge. I’ve not been that good mentally lately so singing a setload of intense love songs was always going to be slightly daunting. But the Cosy audience is the best you could ask for – they were warm and accepting of my dodginess.

And then, on Monday, I played ‘Death In Kettering’ on a ferry! Really, what could be better?

I realise that it’s now five years since Mattias invited me over for the first time to play Cosy Den. In the past five years, I can’t explain how much going over there to play has changed me, changed my music and changed the way I interact with the world musically. Certainly, I wouldn’t have been playing Indietracks or London Popfest or HDIF without the initial reaching out from Mattias.

Who knows what one small act can snowball into? A fanzine interview can turn into a gig, the people you meet there can put out your records or become your fellow travellers or simply, your friends.

I would like to thank Mattias and all the Cosy Den Crew for everything they’ve given me the past five years. Here’s to the best alternative music night in the world! 🙂 (for more general pics of the festival, click the pic)

I played in the church which, for me, is the best stage of all. It’s the right size for the intimacy I want in a gig. It was a bit nerve-wracking as I was doing two very new songs, one only around three weeks old. And both of them are still too raw, singing them is perhaps too much catharsis as opposed to performance. (This is the audience in the church, filling up just before I played!)

But the gig went well and I met loaaads of lovely people afterwards who said they’d loved it. Bless em! That’s the best thing about gigging: the connections you make that would never have been possible otherwise. It’s one of the times that I, as a nutter, can try to break down the walls between me and other people without getting carted away to a loony bin. So, let’s hear it for socially-sanctioned temporary transgression of normal mores!

And on that note, a big thank you to Martha and Blair! 😉