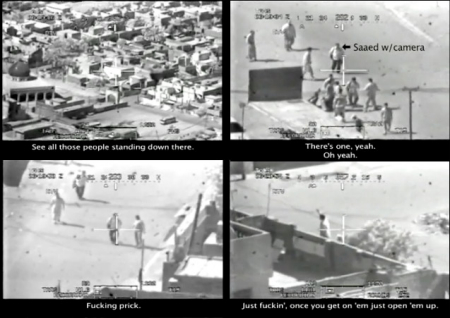 Wikileaks claims to have obtained and decrypted video that shows US occupying forces in an Apache helicopter intentionally firing on a dozen civilians in Baghdad, including journalists working for the Reuters news organization: 22-year-old Reuters photographer, Namir Noor-Eldeen, and his driver, Saeed Chmagh, 40.
(Source: Boing Boing)

I waited a couple of days before I posted this. I couldn’t really believe it. I didn’t want to believe it.

So far, the US have acknowledged that the video is real and are “attempting” to trace the original.

What is clear here is that portions of the US military do not see Iraqis as humans any more. They can murder them in cold blood and then laugh about it afterwards, as if they’re idiot teenagers playing Call Of Duty. This is the behaviour of fascists, this is the behaviour of Nazis. People wonder how the concentration camp guards could have sent innocent Jews into those showers: this video shows how. They laughed as they did it and probably joked about it with their friends. 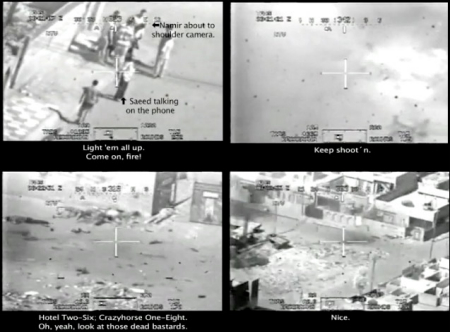 They were probably exactly as psychopathic and truly, basely evil as the troops firing first on these civilians and then on the people going to their rescue.

And these murders happened years ago. It would all still be hushed up if it wasn’t for Wikileaks.

This video is the crystallisation of the West’s mission in Iraq. Be proud.

Wave your little Union Jacks and be proud.