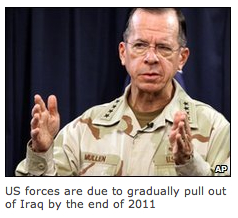 America’s top military officer has voiced concern about an incursion by Iran into Iraq that ended with Iranian soldiers seizing an Iraqi oil well.

“All of us are concerned about the influence of Iran,” Adm Mullen told a news conference in Baghdad.

“I worry a great deal about Iran’s view of destabilising this region as well and specifically… focusing on an oil field.”
(Source: BBC News)

Because, of course, only ONE illegal invasion at a time, guys! The US and UK have got dibs on Iraq’s oil, no fair! Stop pushing at the back!

Still, the Iranians haven’t done a thorough job of it, they haven’t murdered 1.2 million Iraqis in their bloodlust for oil like the US and its allies have done.