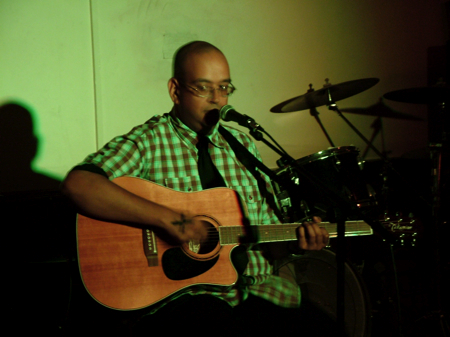 On July 12th, I played at The Head of Steam, Newcastle. It was great.

The gig was organised by Stephen This Almighty Pop and I was lucky enough to be playing with his band Kosmonaut and also with The Honda Express (featuring members of Strawberry Story).

Although Stephen thought the turnout was too low, that never matters to me. Having done both, I’d rather play to a small audience who are really into it than a hefty swell of disinterested hipsters.

The audience was perfect for me: I could look at them, try to connect with them. My songs are all intensely personal, all autobiographical so every gig is something of a confessional. Somehow, being able to see the eyes of the person you’re singing to makes it less contrived, more real.

A lovely girl came up after the gig, she’d come along because of ‘Your Woman,’ of course, but she’d danced and swayed through the rest of the set too. She said I’d made her year, bless her! That’s the kind of comment every egomaniac songwriter loves to hear. 🙂

After the gig, I was on such a high that I was mentally fit enough to go and play the Cosy Den Festival after all. You see, these things snowball…

So, a very belated thanks to Stephen and everyone I met that night. You’re brill.