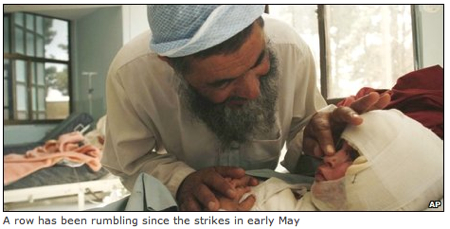 Failure by US forces to follow their own rules was the “likely” cause of civilian deaths in Afghan airstrikes last month, a US military report says.

US officials looked at seven strikes on Taliban targets in Farah province on 4 May, and concluded that three had not complied with military guidelines.

The report accepts that at least 26 civilians died, but acknowledges that the real figure could be much higher.

The Afghan government has said 140 civilians were killed in the strikes.
(Source: BBC News)

But take a look at the top quote. For weeks, after every US murder-spree, the US government has been happily denying any claims of civilian injury. It’s been engaging its usual policy of spin and mis-direction. Meanwhile, US bombs and missiles have been killing Afghan civilians.

And no-one says anything.

The British PM remains mute. France, Germany, Spain… nothing. Every so-called “democracy” in the world sides with the USA, would never dream of condemning these murders.

Now, when it doesn’t even make the front page, the US admits to “errors.”

The US report defends the Farah operation, saying the use of force “was an appropriate means to destroy that enemy threat”.
“However, the inability to discern the presence of civilians and avoid and/or minimise accompanying collateral damage resulted in the unintended consequence of civilian casualties,” the report says.
(Source: BBC News)

That’s a beautifully brutal way to write off the murder of 140+ innocents.