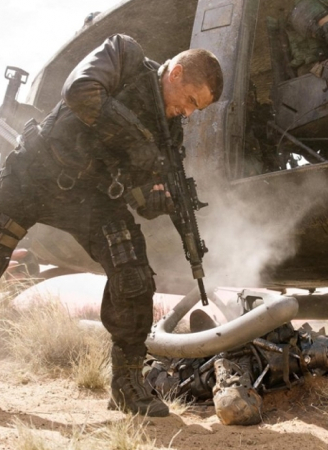 Today was Father’s Day so I took my Dad to see the most blokey film on at the moment: Terminator Salvation. (Or Terminator: Salvation. Or T4: Salvation. I’m not quite sure which one is definitive!)

Now, onto the more lengthy, wanky appraisal… (WARNING! SPOILERS AHEAD! DO NOT READ IF YOU HAVEN’T SEEN THE FILM!)

I don’t think I have particularly weird tastes in film. They’re pretty much the same as my music tastes – I like pop films the same as I like pop music. Anything willfully experimental or self-consciously chin-stroking leaves me cold. Therefore, you’d think that I’d go along with most reviews of most films, seeing as I’m quite average.

But if I’d listened to the reviews of Salvation and hadn’t bothered to see it, I’d have missed a lovely little film. 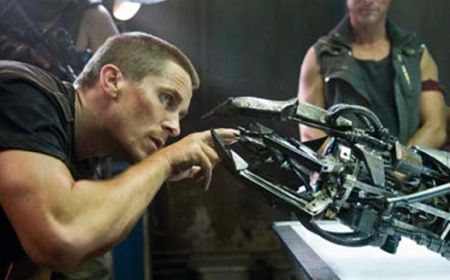 Nearly all the reviews I’ve seen bemoan McG as choice of director and say that the story is choppy and emotion-light.

T4 has a very human, very emotional thread running through it. McG establishes characters one cares about and empathises with. Even the token cute kid! Normally, token cute kids in SF annoy the buggery out of me (hello Newt, hello Naomi Wildman!). But Jadagrace Berry never crosses that line, so full props to McG for pulling that off.

From the opening shots set, bizarrely, six years ago, McG delivers a solid, grounded slice of Terminator. I don’t say that lightly, I adored Terminator: Sarah Connor Chronicles, it’s easily the best recent SF TV series. I was very saddened by its cancellation and really thought the coming film couldn’t match it for emotional depth and breadth. Terminator Glau! 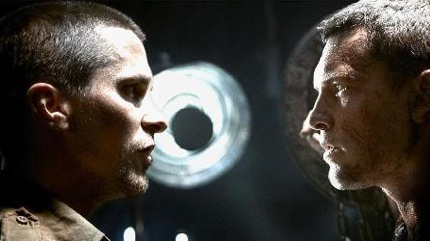 But it does. A lot of the credit for this rests on the shoulders of the film’s dynamic duo, Bale and Worthington. Bale’s John Connor is the best John Connor so far. The fanboy in me loves seeing, finally, an adult, powerful, Connor. The scene at the start where he throws himself down the shaft of a Skynet base shows he’s the kind of man we always wanted John Connor to be.

Bale has the physicality to be utterly convincing but he also has those searchlight eyes, scanning from confused hurt to pure rage in a flicker. I really cannot fault his Connor in any way. I only wish there was more of him but, apparently, Bale only took on T4 after re-writes to increase his screen time. How much Connor would we have seen originally?

Another actor could have mangled Connor’s big hero speech at the end of the film. Could have made it as laughably corny as the motivational-poster barf-fest at the end of Independence Day. Bale, however, is not another actor. He’s Christian GODDAMN MOTHERFUCKING Bale and we all know how seriously he takes his acting. 🙂 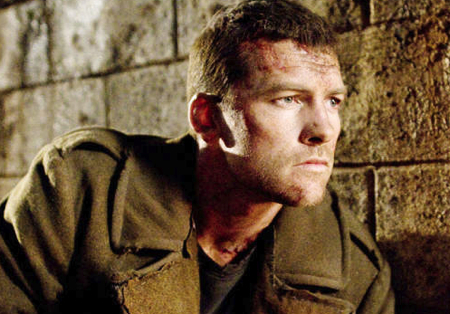 Nearly taking Bale’s crown, Sam Worthington as cyber-Lazarus Marcus Wright is always compelling, ever magnetic (sorry). If I was a 1940s studio head, I’d chomp my cigar, belch and then say, “Kid, the camera loves ya!” before signing him to a punitive exclusive contract.

McG pulls a lot of extreme close-ups in T4 and Worthington could easily have wilted under that pitiless scrutiny. He doesn’t, he seems to revel in it. His role is in some ways more complex than Bale’s: he’s human, he’s not, he’s a killer robot but he feels every cut and bullet, he has the memories of a man but he’s revealed to be a machine. That’s a lot to try and express within the confines of action-film dialogue. Worthington succeeds. 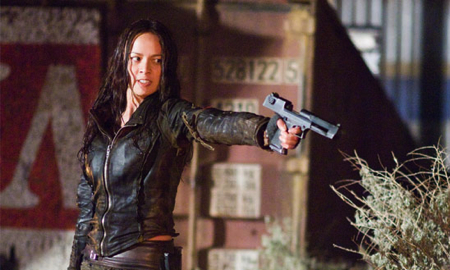 There are some bad points about T4. I do feel that it’s been chopped about a bit.

For example, Moon Bloodgood, above, had a scene where she was topless, comforting Worthington’s character. I say comforting as I don’t think the scene was meant to be sexy, more about humanity, our animal nature. But it’s been excised. Maybe it was to get the 12A certificate but it’s left a great, big clunking hole. One minute, it’s raining and things are getting close between Blair (Bloodgood’s character) and Wright, the next, rain’s gone and she’s inexplicably offering antibiotics to three chancers we’ve never seen before.

This jarring bowdlerisation shook me out of the film, destroyed my sense of immersion for a good couple of minutes. You may think I’m saying all this simply because I’d love to see Bloodgood’s boobies. Yes, of course I would, she’s gorgeous. But the issue is a huge film like this having such a gaping p(l)othole. Couldn’t they have patched over it with something? For what it’s worth, Bloodgood’s breasts are said to be on the forthcoming DVD version. Hmmmm… 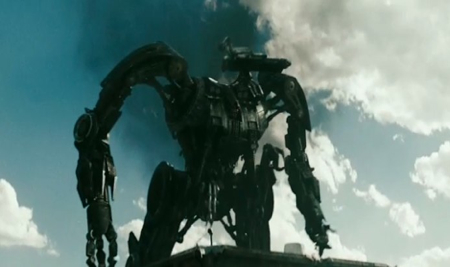 That’s the most irritating bump in the narrative road but there are a few more. Parts of the film feel a little rushed, like too much was cut out. Maybe I’m wrong but that’s how it felt in the cinema. There are certain more normal plot points that made me go ‘huh?’ too. Why does Marcus Wright get recognised as metal by fellow terminators only at the end of the film? Were the ones at the gas station, the termi-bikes et al holding back when they attacked him? It didn’t appear as if they were. So, if they had killed him, what would have happened to Skynet’s grand infiltration plan?

Okay, I am getting into pedantic territory here. Sometimes, you just have to sit back, munch your popcorn and enjoy the spectacle. 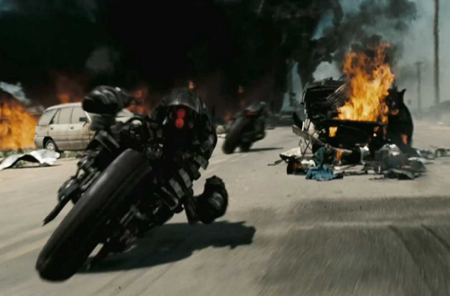 And, overall, that’s what I did. Terminator Salvation engaged me, made my pulse race, made me care about the characters and the climax had me curling my toes in apprehension. I couldn’t really ask for more from a summer blockbuster action film.

The real compliment? Terminator Salvation rewired my experience of reality. When we left the cinema and drove home, I kept noticing how beautiful our world is, in contrast to the post-Judgement Day landscape of T4. People walking their dogs, little kids on bikes, it all looked glorious. Like some kind of surreal advert.

But then I also noticed the number of robots and computers around us… the automatic doors, the ticket machine, the blinking lights of the escalator. Suddenly, even the obsequious whirr of my car’s electric windows sounded menacing to me.

One day… one day…