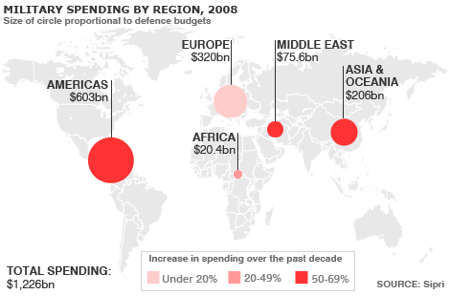 Global military spending rose 45% between 1999 and 2008, fuelled by the US-led “war on terror” and by increased wealth in China, Russia and the Middle East.

In Western and Central Europe, military spending increased at a much slower rate than in any other part of the world, while the US accounted for 58% of the global increase during the decade.

The War On Terror – just great for profits!

Capitalism = eternal war. They just change the name of the enemy every few years. Used to be anarchists in the 1900s, then Communists.