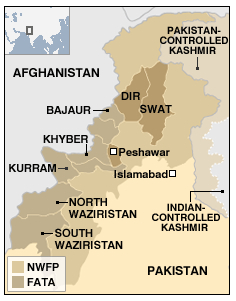 Missiles fired by an unmanned US drone have killed at least 24 people in Pakistan’s Kurram tribal region near the Afghan border, officials have said.

Local officials said the dead were local Taleban and that the toll may rise. Thirty others were injured.

Correspondents say this is the fifth drone attack on Pakistani territory since Barack Obama became US president.

Pakistan is critical of the tactic because, it says, civilians are often killed, fuelling support for militants.
(Source: BBC News)

Remember: the USA is not in a state of war with Pakistan.

Remember: these dead are only alleged to be Taleban. There isn’t a shred of proof. The only thing we know for sure is that 24 Pakistanis were murdered and thirty more injured. And the USA notoriously has a recent history of manufacturing evidence to back up its crimes. (Also see here and here and here.)

So, this is basically a terrorist attack by the USA on Pakistan. People who were not enemy soldiers in a state of war were killed with no trial, no charges, no nothing.

Yet, Gordon Brown remains silent. No other world leaders comment.

Apparently, some terrorism is more okay than other terrorism.

If you think I’m foaming at the mouth here, just ask yourself, honestly – what would the news be saying if any other country but the USA was launching missile attacks, killing people every week? If China was doing that to Tibet? Or Iran on Israel?