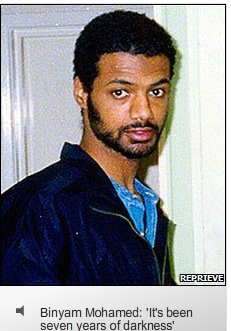 A UK resident freed from Guantanamo Bay has said he would not have faced torture or extraordinary rendition but for British involvement in his case.

US interrogators told him, “This is the British file and this is the American file,” Binyam Mohamed, 30, told the BBC in his first broadcast interview.

He said he wanted to see ex-President George Bush put on trial and, if there was evidence, former UK PM Tony Blair.
(Source: BBC News)

Yes, it would be just to see war criminals like Bush and Blair put on trial for their crimes, as Saddam Hussein was for his.

But it won’t happen, of course. Because it’s the powerful who decide our morality. Might makes right. The USA can posture about terrorism about being evil, can peddle it’s War On Terror even as it carries on it’s own series of terrorist bombings.

Blair and now Brown lecture us about freedom, about peace at the same time as having the blood of over one million Iraqis on their hands.

And the fact that the UK helped the USA kidnap and torture scores of innocent people, some of them children, doesn’t even warrant a mention on our TV news, let alone a public inquiry.

We have a government of war criminals. Never forget that.