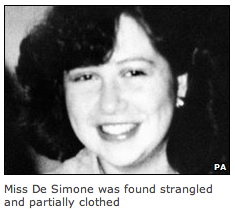 A man jailed 27 years ago for murdering a barmaid could be released from prison after DNA evidence was reviewed.
Sean Hodgson, 57, is serving a life sentence for killing Teresa De Simone, 22. She was found strangled in her car in Southampton in December 1979.

The case has now been sent to appeal over claims tests on semen found at the scene prove it was not Hodgson’s DNA.
The BBC understands the Crown Prosecution Service will not contest the appeal on 18 March.

Hodgson, who is also known as Robert Graham Hodgson, would be one of the longest-serving victims of a miscarriage of justice if released.
(Source: BBC News)

As horrible as this story is, an innocent man having 27 years of his life stolen by the state, it could be worse. If this had happened in the USA or any other country barbaric and backward enough to have the death penalty, doubtless he would have been executed by now.

The death penalty will always lead to the murder of innocents. Always.

A man jailed for murdering a woman in 1979 has had his conviction quashed at the Court of Appeal after spending 27 years in prison.

Sean Hodgson, 57, was jailed for killing Teresa De Simone, 22, who was found strangled in her car in Southampton in December 1979.
A case review proved DNA found at the scene was not his.

Mr Hodgson is one of the longest-serving victims of a miscarriage of justice in the UK.
(Source: BBC News)

Another reason why you should never blindly believe what the police say.