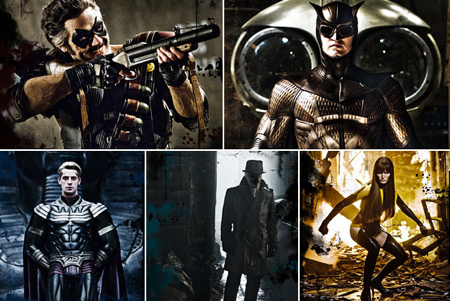 Yesterday, I went to see Watchmen.

And I loved it!

But Watchmen, the major motion picture, is probably the most faithful comic to film adaptation I’ve yet seen. So far, Ang Lee’s Hulk is my favourite ever comicbook film but Watchmen is very close to taking that title. 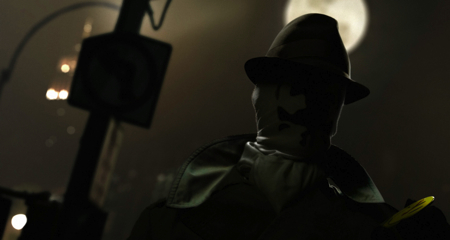 From the lush opening credits, filled with details for fan and historical obsessive alike, this film drips class. The actors are all magnificent, delivering what has to be occasionally unnatural dialogue with emotional skill and realism. Jackie Earle Haley has some hugely melodramatic spiels to perform and, in a lesser actor’s hands, they could have sounded comedic rather than deranged. His Rorschach is pitch-perfect: despicably judgemental and ultraviolent and yet hopelessly idealistic. The prison scene where he’s punning, mid-butchery, was compellingly horrible. The irony is, of all the Watchmen, he is the most moral, the most true. 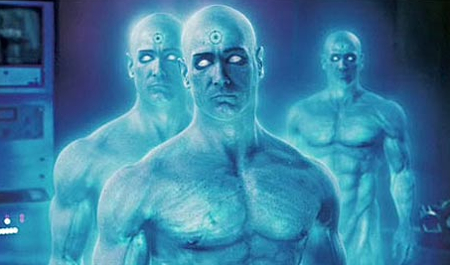 Billy Crudup also has a tough job – how to make a cinema audience empathise with a god? He pulls it off, though and watching him as Dr. Manhattan, it was hard to remember him as the all-too-human rocker in Almost Famous. His tiny facial gestures, the minute inflections of his otherwise measured speech, all flesh-out the blue feller. I have to admit, the scene where he’s talking to Laurie on Mars, explaining how he sees time, did make me cry. Crudup, you’re too damn good. Also cool to see the blue todger present and correct, swinging away. 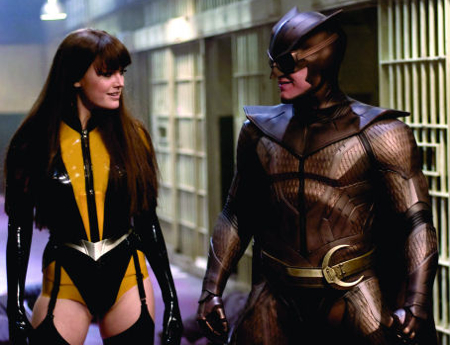 I also thought the love story between Dan and Laurie was beautifully played. Malin Akerman, as Laurie, Silk Spectre II, was luminous and I could tell there were more than a few blokes both ogling and sighing whenever she was on screen. Her focus on Patrick Wilson, playing Dan, Night Owl II, was intense and made her affection and need for him obvious without being telegraphed. In turn, his wounded and literally impotent Night Owl could have been ridiculous. It wasn’t, he invested the character with huge charm and the kind of everyman likeability Hanks and Costner used to monopolise. 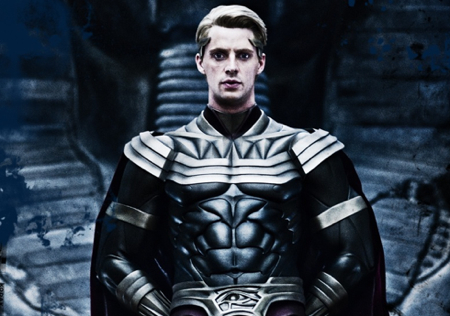 Matthew Goode’s Ozymandias left me confused. I didn’t know whether to love him or hate him. Is he Gandhi or Hitler? He played the character with an ambiguity that could leave the viewer falling either way, whereas, in the comic, I don’t remember feeling such indecision, he a was a nutjob, pure and simple. Bravo to Goode for having the bravery to play Ozymandias that way. Even though I knew what was coming, it was a joy to see the quirks Goode put in, the little signposts to the film’s big twist at the ending. 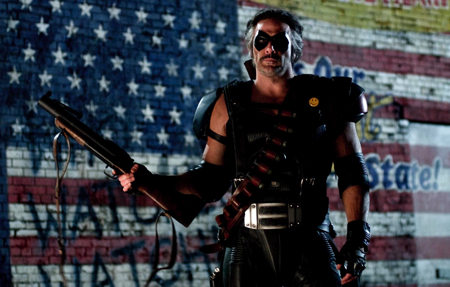 Finally, I hope Jeffrey Dean Morgan gets the critical plaudits he deserves for his portrayal of Edward Blake, The Comedian. As violent as Rorschach without any of the fucked-up hyper-morality, how can any audience feel any kind of sympathy towards this child-killer, rapist and stone-cold murderer? Yet, Morgan brings it home with a twisted, canny performance that makes you care, despite not wanting to.

Like Ang Lee’s Hulk, the spur for all these great actors giving wonderful performances must be a similarly talented and patient director. I haven’t seen 300 but I may be tempted now. Anyone who can frame a confusing narrative like Watchmen so skillfully might even make me like half-naked men bellowing and fighting. Zack Snyder’s mission was obviously to completely ignore any nod to the comic book origins of the story and just tell it as emotionally realistically as possible. And, in doing that, he’s actually stayed true to the graphic novel far more than if he’d tried for the same, sappy, snappy tone as, say, the execrable Fantastic Four (which is probably what the studio would have preferred).

Now about the squid…

Others may disagree but I’m glad they cut it out. I feel the original squidness works beautifully in the comic but, at the end of two hours, might have provoked a great deal of WTF??? from mainstream cinemagoers. I love Moore’s daft squid, I love its Lovecraftian beakiness, don’t get me wrong. But I think the rogue Dr. Manhattan re-write makes much more sense, it feels emotionally more true and powerful than NY getting squished by the Flying Spaghetti Monster. Your mileage may vary. 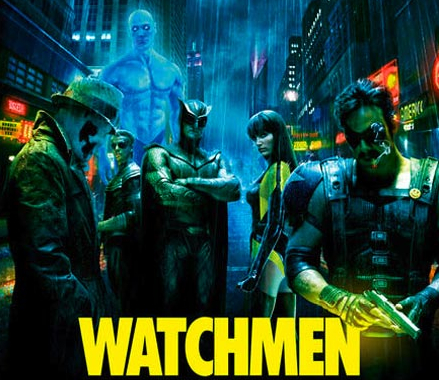 So, 2009, twenty-plus years after I first read it and, against all my expectations, we have a film version of Watchmen that preserves the tone, spirit and shocking nature of the original. I know Moore hates it, I know scores of comic fans will find fault but I love it. If you’re expecting Spiderman or Fantastic Four, you won’t enjoy this film: it’s too long for you and it requires you to use your brain throughout. But if you loved Ang Lee’s Hulk, The Dark Knight or any film that melds fantasy with reality in a solid, plausible manner, I suspect you’ll love Watchmen as much as I did.