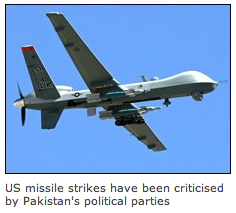 Missiles said to have been fired by US unmanned aircraft have killed seven people close to Pakistan’s border with Afghanistan, Pakistani sources say.

Two missiles reportedly struck a house in Sararogha, in South Waziristan, and the dead are believed to include suspected militants.
(Source: BBC News)

“Suspected” militants? Well, that’s good enough for the US to bomb an entire house. After all, guilty until proven innocent, eh?

As I always say, imagine any other country launching international missile attacks on a country it’s not at war with. Imagine the horror and outrage if, say, China started strafing houses in Tibet with missiles from robot drones, claiming they harboured terrorists.

And yet, when the USA does it… nothing. No-one cares, it hardly even makes the print news, let alone the TV.

Pakistani leaders had expressed hope that the new US administration would halt the controversial air strikes, saying they fuelled public anger and complicated Pakistan’s own counter-insurgency efforts.

But the drone attacks have continued since Barack Obama was inaugurated as US president last month.
(Source: BBC News)