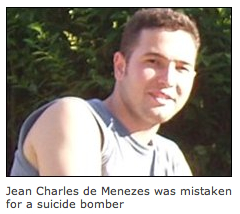 The jury at the inquest into the death of Jean Charles de Menezes will not be able to consider a verdict of unlawful killing, the coroner has said.

Sir Michael Wright said that having heard all the evidence, a verdict of unlawful killing was “not justified”.

Mr de Menezes, 27, was shot dead by police at Stockwell Tube station in south London after he was mistaken for one of the failed 21 July 2005 bombers.

The jury may now return either an open or lawful killing verdict.

So, the jury has been barred from delivering any verdict it wants. It has been stopped from declaring the killing of de Menezes as unlawful killing.

Basically, by his interpretation of the law, Wright has let the murderers of de Menezes off the hook.

This innocent man, who wasn’t running, who wasn’t wearing a coat and rucksack, who didn’t leap barriers (all of that was false, lies spread by Ian Blair and other Met officers) was shot seven times in the head at point blank range. And, according to eye witnesses, no warning whatsoever was given:

A woman sitting near Jean Charles de Menezes as he was shot dead told today how police were “out of control”.

Commuter Anna Dunwoodie told the inquest into the Brazilian’s death how she was “very, very clear” officers did not shout armed police before opening fire.

Ms Dunwoodie also said she thought firearms officers were a gang, as she described a “sense of panic” from officers as Mr de Menezes was shot seven times in the head.
(Source: The Independent)

It was a police murder, pure and simple.

Cressida Dick, the officer in charge, should have been arrested. Instead, she was promoted. Well done, Metropolitan Police – that’s the way to reward ineptness that kills civilians.

And now, the jury at this inquest have been legally barred from delivering the only verdict that makes sense of the horror of Jean Charles de Menezes’ death: murder.