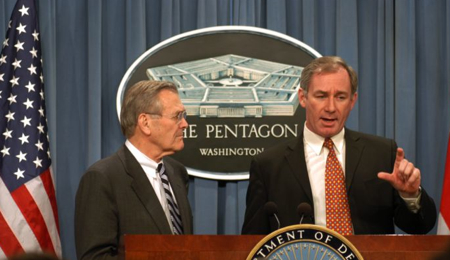 Hoon, right, with another happy child-murderer

Transport Secretary Geoff Hoon has said the government is prepared to go “quite a long way” with civil liberties to “stop terrorists killing people”.

He was responding to criticism of plans for a database of mobile and web records, saying it was needed because terrorists used such communications.

By not monitoring this traffic, it would be “giving a licence to terrorists to kill people”, he said.
(Source: BBC News)

While the political pundits ramble on about voter choices, credit crunch and the US show-elections (not real elections as the only choice is between two capitalists), let’s consider our government here in the UK.

Take Geoff Hoon. Is he completely evil, in a Himmler, Goering kind of way? This would seem to bear that out:

Geoff Hoon, the Defence Secretary, suggested yesterday that mothers of Iraqi children killed by cluster bombs would “one day” thank Britain for their use.

Mr Hoon’s claim came as the Ministry of Defence confirmed for the first time that it had dropped 50 airborne cluster munitions in the south of Iraq, leaving behind up to 800 unexploded bomblets.

Labour MPs, landmine charities and aid agencies all condemned the Defence Secretary for his comments in an interview with BBC Radio 4’s Today programme.

When put to him that the Iraqi mother of a child killed by cluster bombs would not thank British forces for their actions, Mr Hoon replied: “One day they might.

But Alice Mahon, MP for Halifax, said Mr Hoon’s remarks about the mothers of Iraqi children killed by the bombs were “cruel and unfeeling.

“It was an outrageous thing to say. Does he seriously think he will win hearts and minds with talk like that? It was a typical quote from a conqueror, not a liberator,” she said.
(Source: The Independent)

Saying that the mothers of the children you murder will thank you for it one day – come on, only a Nazi would think like that. “A conqueror, not a liberator,” as Alice Mahon says above.

But he did say that. And he wasn’t sacked from our wonderful government of liars and war criminals. In fact, he’s doing very nicely, thank you.

Now he’s saying that he’d go “quite a long way” to protect us from terrorists. Really? Then why is he so intent on making new terrorists with our continued illegal occupation of Iraq? The bloody war there, the pile of over one million Iraqi dead, surely that’s going to create a lot of people who are angry at Britain and want revenge.

Those Iraqis will run at us, smiling and waving, as they drip with the blood and brains of their murdered children. They will sing our praises at the way we bravely used cluster bombs and chemical weapons on them, to liberate them.

Time for a reminder of this quote from Roland Huguenin, one of six International Red Cross workers in the Iraqi capital:

Oh, and those cluster bombs that Hoon loves? This Commie brigade hate them: 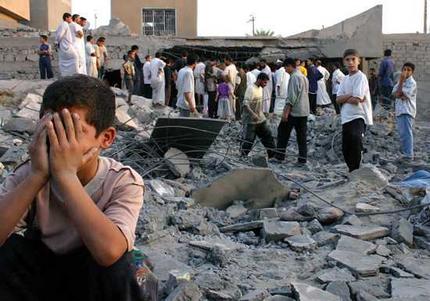 Yeah, Princess Di – what a lefty troublemaker, eh? Good old Hoon, standing up to these anarchists!

You see, now I understand Hoon’s reasoning process: it’s non-existent. This is, after all, a man who thinks killing babies makes friends for the UK. It’s no wonder that he thinks that the only way we can be free is to have all our freedom removed, to be watched by the government every second of every day in every aspect of our lives.

And after all, haven’t the UK government proven how careful they are with our data? I mean, they could be leaving it on buses and posting it off to the wrong person and suchlike… But that’s not happened much. At all.

I think Hoon is right. Why don’t we install cameras in every home, watching every citizen just in case one of us is a terrorist? This is the HOON WAY! What do you want – trivial civil liberties or to be protected from evil terrorists?