Click the pic about to see a few autumn sunshine pics from my garden! Popping up everywhere in the garden! 🙂 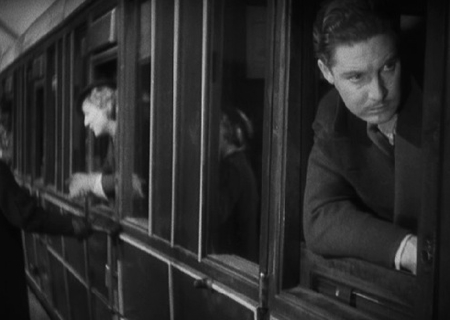 Today, my mrs. and I went to see one of my favourite films, Alfred Hitchcock’s ‘The 39 Steps.’ I’ve seen it many times on telly, I’ve got the DVD but I’ve never seen it at the cinema so when I saw it in the Quad programme, I couldn’t resist. It’s the first time I’ve seen a film at the Quad so this post will be a little bit about both: the flick and the cinema.

Before we went up to Cinema One, we had hot drinks and a bit of tasty apple crumble in the Quad Cafe. I love the view from the cafe, looking out across the market place. There are always skate kids, families, couples and sometimes giant insects walking past so it’s a good start to the cinema experience. It’s how a modern cinema should be, bright, airy and with friendly staff. Too many cinemas are dingy and threatening, resembling cut-price carpet shops more than temples of entertainment. Not the Quad!

We went up when the ads had started and we were lucky enough to bag a double seat, perfect to snuggle up in. The pre-show finished and then the curtains came in from the sides (1935, remember, 4:3 aspect ratio, widescreen didn’t become common till the ’50s). Then the film started…

I’ve seen this film so many times. Must be at least twenty or more by now. But seeing it properly, as it was meant to be seen, was a revelation. There’s so much detail I’ve never noticed before, so many touches that Hitchcock added that combine to make ‘The 39 Steps’ the masterpiece that it is. 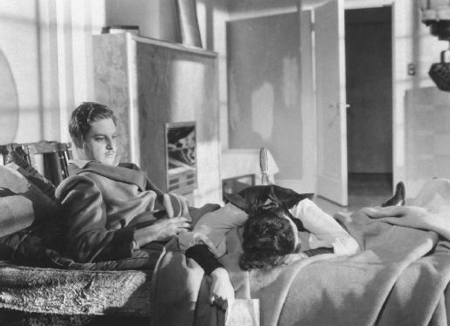 The story, the screenplay is fabulous, just barrelling along from one tight scene to the next. Many films have tried to mix suspense and humour, romance and spies and failed terribly, hamstrung by their scripts. No such problem here – the script is all killer, no filler. What actor wouldn’t love the line: “Oh, it’s a whole flock of detectives!” The script, the story is, of course, the same on a big or small screen.

But the storytelling was enhanced by seeing the details on the actors’ faces, every passing micro-emotion, every nuance. I can confidently say this: acting hasn’t got any better since 1935. Donat, Carroll, the other leads and every bit part act their socks off. No-one lets the side down. Surely this is testament to Hitchcock’s skill as a director of emotions as well as actions? 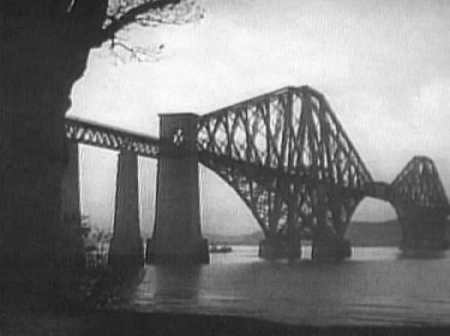 In the cinema, your eyes can rove over a scene, absorbing details you may not consciously process but which, in the hands of a gifted filmmaker, all conspire to draw you into the world, into the narrative. Watching a film is always a contract: the audience agrees to suspend its disbelief on the promise that the film does its best to entertain them.

Sadly, even the best directors in the world can’t guarantee that their work will be seen in the best way. I enjoyed Dark Knight but within 45 minutes of the start, I was squirming and in pain as the seats in the Westfield Showcase are some of the most uncomfortable I’ve ever been in. This spoilt my immersion in the film and, inevitably, my enjoyment too.

No such problems at Quad. Nothing compromised today’s showing. The seats are huge (they must be if I can fit in them comfortably!) and completely relaxing. The sound and projection were top-notch, nothing dragged me out of the film. 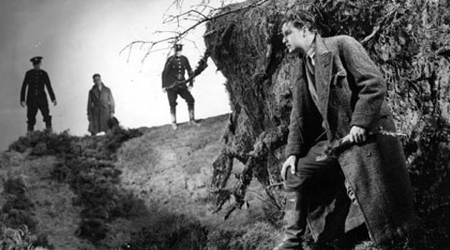 So I revelled in it. I loved it. Every frame, every slightly speeded-up chase sequence and every model shot. I also loved seeing things I’d never noticed before, like the adroit pull-focus Hitchcock does when Donat is in front of a road sign. Or the shot in the back of the car of the handcuffed stars which then pans around the back, apparently passes out of the window and then watches the car drive off. If that shot was done today, with all the available CGI trickery, I’d still think it was pretty slick. That Hitchcock pulled it off so gracefully, 73 years ago… well, the man was a genius, wasn’t he?

I’ll finish with probably my favourite scene (though they all are, to be truthful): 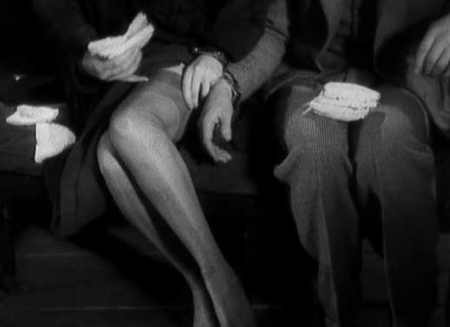 Look at the still above. It’s from the scene where Carroll and Donat are in the hotel and she’s taking off her wet stocking. For me, it’s the epitomy of Hitchcock: dangerous, sexy, funny, all rolled together. As far as she knows, she’s shackled to a murderer. The bit where Donat’s hand rubs down her leg and then briefly cops a feel of her knee before she distracts it with a sandwich is perfect. It’s like the legs and the hands are the actors, the faces aren’t even needed. And, again, I have to imagine any modern director doing this scene with the same mix of suspense and whimsy and I simply can’t. There’s a deftness here, a skill and precision that transcends the decades from when this film was made (and all the social changes since then) and grabs us by the heart. The reason this film hasn’t aged as terribly as some other 1930s’ fare is that Hitchcock connected to human universals. And those haven’t really changed in thousands of years. This is why he’s a genius and why ‘The 39 Steps’ is a perfect film.