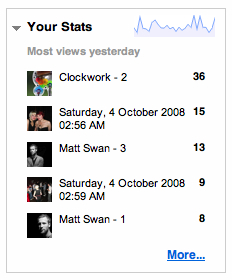 Above is a summary of my Flickr stats for today. Most popular pic, clockwork. Second, fit girls. Third, fit lad. Fourth, group shot people have clicked on to see if they can spot themselves.

Now, here’s a graph of my views on this website. For some reason, it’s gradually increasing which is both gratifying and mystifying. After all, most of the stuff on here is rambling pointlessness mixed in with depressing antiwar rants. Still, I’m happy you’re reading!

As I’ve said before, having this kind of readership in the fanzine age would have been the wildest of indie kid fantasies. Sell 100 fanzines and you’re a superstar. Now that anyone can throw up a blog and connect with an audience, it seems most of us don’t bother. Weird that, innit? The same as loads of people have high-quality video cameras now but it hasn’t turned them all into Truffauts and Spielbergs. 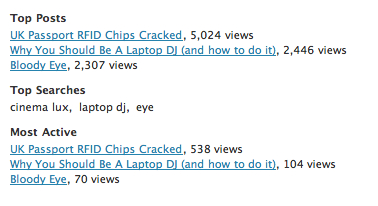 Last bit of metablogging – the top posts on this site. Number one is the rant I did about passport RFIDs which has leapt up as it appeared on a few aggregating sites. Second is my rant about laptop DJing which I’ve now updated as it was getting so many views and was five years out of date. And the last is about my bloody eye! Are you lot okay out there or are you all stumbling round with bleeding eyes brought on by stressing about insecure passports and how you’re going to DJ? 😛