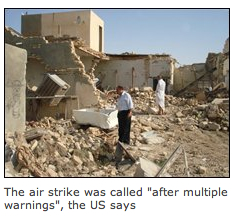 The US military says seven people, including three women civilians, have been killed in an air strike in Iraq.

Witnesses are quoted as saying the attack happened after US troops had surrounded a compound in the village.

Reports quote Iraqi officials and neighbours saying that the family whose members were killed in the air strike had no connection to the insurgency.
(Source BBC News)

But let’s stop for a moment and praise the heroism of these brave US forces. Without a thought for themselves, they surrounded a compound and then called in a lethal air strike on women and children. Really, isn’t that uncommon valour?

I mean, they could have actually gone in and tried to shoot any “insurgents” (carefully planting guns on them afterwards) perhaps sparing the lives women and children.

But no. They just decided, very bravely, to blow the whole fucking lot up. Indiscriminately. It was those evil “insurgents” what caused it. If they hadn’t been so evil, then the USA wouldn’t have to slaughter those Iraqis.

Kind of reminds me of the way Al Quaeda talk about all the people they murdered in the WTC attack. Those Americans had ceased to be human to Bin Laden’s insane followers.

It appears the US government and Al Qaueda are reading from the very same tactics book. Oh, apart from one thing: Bin Laden only managed to murder 3,000 innocent Americans whereas the USA has managed to murder over one million Iraqis.

They’re clearly beating Bin Laden in the numbers game. But then, who’s counting? Not the USA.

Let’s just add the bodies of these dead Iraqis to the top of the pile of and then wave the jubilant flag for Operation Iraqi Freedom.